Humbugs & Swindles In The Bee Business

“Ye shall do no unrighteousness in judgment, in
meteyard, in weight, or in measure. Just balances,
just weights, a just ephah and a just hin, shall ye
have.” – Leviticus 9:35, 36

In 1873, when the April number of the American Bee Journal came out, I was glad to find an advertisement of dollar hives. At this time I hoped that more manufacturers of dollar hives would follow in my tracks, but I also hoped that they would not meet with the abuse I had received in breaking the first furrow in that direction.

So far as stirring up trouble is concerned I went on record in the May number of the American Bee Journal, 1873, as agreeing to overhaul all articles written with motives of profit by patentees of hives and I agreed to accept the abuse that followed as a matter of course. When patent rights should be dropped and the attention of the patentees turned toward making good hives at a fair price (and this result seemed even then dawning), I agreed to be ready to drop personalities, having accomplished all that I desired.

In the July number of the American Bee Journal for 1873 a writer mentioned those whom “Novice has so mercilessly punched.” Now my friend was in error for I did not punch any one, or at least did not mean to, but I hoped I punched their claims hard and full of holes too, when they were gross exaggerations. For instance, when some one in order to sell rights led beginners to expect that a hundred pounds of box honey or more might be obtained per hive on an average, I undertook to remonstrate with all my power.

One of the most lamentable wrongs in bee culture was the custom of taking money for a right to make and use a hive, the “inventor” knowing that the buyer could make and use a hive so nearly like it as to answer every purpose without using a single one of the patented features. In starting Gleanings in Bee Culture it was one of my special aims to inform the public fully of all such transactions coming under my observation. 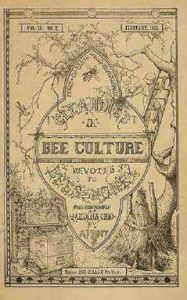 Several irresponsible persons had advertisements inserted in some of the bee journals; and in one instance considerable sums of money were lost by beekeepers sending to them. When Gleanings was first started I positively refused to advertise any recipes or methods of doing desirable things in the apiary, for the first person sending the needed amount could if he chose then publish it to the world. I felt that information of all kinds should be free through the journal. Samples, models to work from, or implements themselves, of course, have a cash value but not secrets as a general rule.

A.T. Wright of Chicago sold a very small 25-cent pamphlet recommending his patent hive. He not only endorsed sugar syrup for wintering, but left me far in the shade in directing that it be fed the bees to produce nice box honey profitably. Nice looking comb honey can be produced, it is true, as my experiments in feeding gave me ample proof; but in taste it is sugar syrup still, and worse still it costs $1.00 a pound or more.

In 1873 I received a circular telling how to make artificial honey, “Ambrosia honey,” in every respect as good as that made by the bees. The recipe was copy-righted and secured according to law, and parties receiving it were cautioned not to sell or make known the recipe to others.

Now, if I hadn’t a fondness for “good things” I don’t know who had, and I sent a two-dollar bill for the recipe. I proposed to give the whole thing in the next number and take the consequences.

The recipe was as follows: Fifteen pounds of white sugar, four pounds of soft water, one-half teaspoonful tartaric acid, one teaspoonful of salt, four drops of oil of peppermint, one drop of oil of rose, one ounce of gum arabic dissolved in half a pint of water. This was to be boiled and one and a half pints infusion of slippery elm added, then when nearly cold another pound of good honey was to be put in also. The originator claimed to have invented this during the Winter of 1871, with the assistance of an expert (?) New York chemist at a cost of nearly $500. However, the recipe was really nothing more than a copy of an old honey recipe without a single addition or improvement. The whole thing appeared in Dr. Chase’s recipe book published in 1867. I gave the recipe in Gleanings so the originator had good grounds for seeking legal redress if the law allowed any in such case.

I sent 10 cents to one H. Herman Flick for a bee sting cure, guaranteed to cure without cost and with no more pain or swelling. The principal paragraph in the cure was as follows:

“How cured. In severe cases the person should drink freely of whisky or some strong alcoholic drink until he feels its effect. This will prevent all danger and further swelling.” The saloons had just been closed in Medina or I feared there would have been a serious rush to the beehives for the sole purpose of being stung, if such treatment had been recommended. 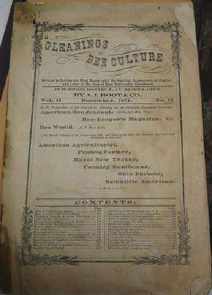 In the April number of Gleanings for 1874 I published a letter from a man who had sent $30 to Gray and Winder of Cincinnati for two imported Italian queens. They acknowledged the receipt of the order but failed to send the queen. They offered to make it right some time if the complainant would be quiet and gentlemanly about it, but in a letter to me at the time, Mr. Winder said if the transaction was published he would never pay it at all. As the $30 was probably lost. I felt that nothing would be gained by keeping quiet, so I went ahead and published the details in the November issue of 1874, for fear he might go ahead and get the hard-earned dollars from some one else.

Letters that I received from such delinquents came to an old story and I became so hardened that I did not mind it a bit when I was told that I was meddling, that my advice and assistance had not been asked. I was sometimes informed that great numbers of similar complaints had been made of me, but dropped out of kindness. Now this was “mistaken kindness” certainly, for if anyone had a complaint I wanted to know about it. I even agreed to print the complaint.

T.H.B. Woody of Manchester, Mo., was complained of early in 1874, and I wrote him asking if he could give me any explanation. He replied at length that he had faithfully filled all orders with the exception of one, the writer of which had failed to give his address, and that he would be pleased to learn where he should send the money or the queen. In closing he called on God to witness the purity of all his motives and his intentions, and I might have thought him upright and honorable; but I wrote the complainant, that Mr. Woody had lost his address. The complainant in question considered this too big a joke altogether and forwarded me a mass of letters of apologies and excuses and attempted to lay the blame on other people. It seems to me it would have been worth full $12, the amount in question, to write all these letters. Woody first blamed some one else for having cheated him out of a larger amount, as if that excused him at all, and finally said he would return the money by post office order if the complainant would take the risk of having it sent back. Afterwards he wanted to know if he would not take pigs, as money was so hard to get. It looked as though it was hard to get in Texas also, where the complainant lived. 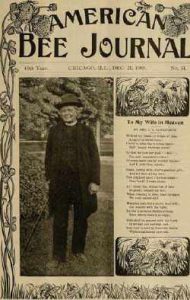 In 1886 Mr. Thomas Horn, an advertiser of queens, accepted money for orders sent him and then refused to fill the orders or answer letters. A subscriber suggested that he was going to make a sight draft on Mr. Horn and tell him that if he did not pay his draft or send the bees he would report him to the post office authorities. I did not know then that under certain circumstances the United States postal authorities would refuse to deliver mail to parties when engaged in swindling operations, but it did not occur to me until after reading this letter that we could oblige men like Mr. Horn to give some sort of a civil reply to complaints by the plan suggested. I waited patiently for Mr. Horn, published his promises and kept back complaints by suggesting that he would fi x everything in time, until I finally received the censure of many good men. Later, after becoming thoroughly convinced of this duplicity, I took a different line of action, and some of my readers thought I was beginning to be terribly severe. However, I wanted every man like Mr. Horn to know that he could not conduct business in this way and get off scott free, and that the way of the transgressor is hard. It seemed to me that it was my duty to help make it hard – so hard in fact that those who were tempted would conclude it would not pay, and give it up even before they started out.