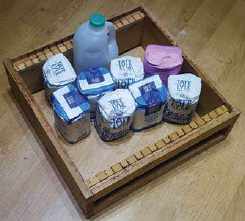 Honey bees collect flower nectar to make honey, but that is only the beginning. It can be shown that they can need more than 50% of the energy in the nectar they have collected to evaporate the nectar into honey1.

Although the research paper goes into some detailed maths, it was previously a visual presentation to beekeepers, and before that a simple thought experiment in my front room, made real with some props. This was to make sure to myself and the skeptical beekeepers that the very surprising result was genuine.

Let’s do that thought experiment again. Imagine a shallow super of honey: to make the numbers simple yet realistic, let the honey weigh 10 kilograms (kg). If it has a atypical 20% water content that means 8kg of sugar and 2kg of water (figure 1). 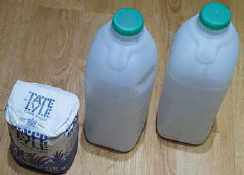 Figure 2. At 20% nectar concentration each kg of sugar in nectar has 4kg of water, 5kg. total.

Figure 3. 10kg of honey has the same sugar content as 40kg of nectar at 20% concentration.

The honey bees typically collect nectar at 20% to 40%2 concentration of sugars, so let’s take 20% concentration as our example, again to make calculation simple yet realistic. Then each kg of sugar they collect in nectar, comes with 4kg of water, a total of 5kg (figure 2).

After the honey bees collect the nectar they convert it into honey. To do this they remove 30kg of water to convert the 40kg of nectar into 10kg of honey.

They use a similar process, evaporation, and it takes a similar amount of energy (slightly larger in fact), as if you tried to do it on your kitchen stove. Anyone who has tried a recipe where it says “add a bottle of wine and reduce by half,” or made jam or marmalade can attest to the amount of gas or electricity and time that takes i.e. a lot of energy. It takes 0.61 kilowatt hours (kWh) to change one kg of liquid water at 100°C into water vapour at 100°C. So it would need 18.3 kWh on the stove to change 30kg of liquid water at 100°C in to vapour. They do not use a stove but lap at it with their tongues for a few minutes, then heat the air gently with their bodies and move that air by fanning their wings for hours to drive off the water content. It takes 0.67kWh per kg to evaporate water at 40°C. That means 20kWh of energy to make 30kg water at 40°C change into vapour. They don’t use electricity or gas as fuel and can’t just pay a big bill to a utility company. They have to go and fetch the fuel themselves in the form of sugar in the nectar they collect. Sugar contains energy at about 4.4kWh per kg so 20kwh is the energy in about 4.5kg of sugar or 22kg of nectar. Including the original 40kg of nectar that constitutes the honey means a total nectar weight of 62kg (figure 4). 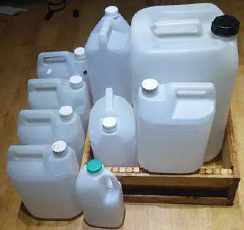 But 62kg is assuming 100% thermal efficiency in the process and therefore no losses of heat. The losses depend on the outside temperature and the design and material of the hive or nest the bees reside in as well as the detailed behavior of the honey bees. So a reasonable value for a wooden hive without many shallows or supers, at an outside temperature of 25°C might be 50%1. This then doubles the 22kg of nectar fuel needed. With 50% thermal efficiency, the 44kg of nectar evaporation fuel plus the original 40kg of nectar means a total of 84kg needs to be collected for the 10kg of honey.

Figure 5 is what 84kg of nectar looks like. You can see why I had to go to these lengths and not just work it out as maths exercise. If a colony produces 100kg of honey per year that’s an energy bill of 400kWh per year or nearly a metric ton of nectar. 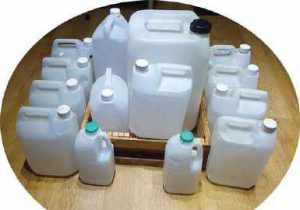 The red M line shows the nectar to honey ratio if the conversion from nectar to honey needed no energy. From this graph you can see that improving the thermal efficiency reduces the amount of nectar the honey bees have to fetch for the same nectar concentration, and for the same effort they can collect a weaker nectar if the thermal efficiency is higher.

If we take away the nectar burned up by the bees flying there and back to a nectar patch six kilometers (just under four miles) away, we get the graph in figure 7. This has moved all of the black lines in the graph up and to the right compared to figure 6. 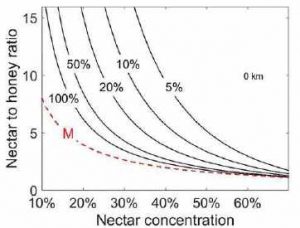 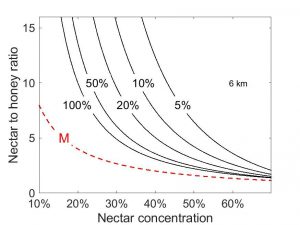 What is thermal efficiency

Thermal efficiency is the ratio of the energy that succeeds in evaporating water to the amount of energy the honey bees actually put into the process. This depends on a combination of the outside temperature, the concentration of the nectar and the level of insulation of the nest or hive occupied by the honey bees. Lets look at those factors in more detail: the first factor, temperature, is dependent on the weather; the second factor, nectar concentration; the honey bees try to optimise3; and the third factor, nest selection. Honey bees put a lot of effort into nest selection4 (and arguably less by bee keepers), because in the wild, honey bees have thick walled (average 150mm) tree nests, man made hives on the other hand have thin walls (19mm) (figure 8) and heat losses up to seven times greater5. 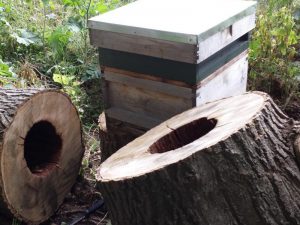 Why is it important?

We have seen how thermal efficiency can change how far honey bees can fly to forage and what flowers they can collect from to make the same amount of honey from the same amount of nectar. In basic survival terms, a high thermal efficiency means in times when the forage is poor they can fly further, find and utilize less rich food. Thermal efficiency impacts the good times as well. Let’s consider that honey bees wings wear out, (we can see that by looking at the bees crawling from the hives with ragged wings, no longer able to fly). So every wingbeat a honey bee takes is a colony resource being used up to collect supplies for the colony6. This resource can only be replenished when new honey bees emerge. If we increase thermal efficiency of the nest it takes less nectar to make the same amount of honey, this means less wing beats flying to fetch the nectar. However, an enormous number of wing beats are being expended in the hive to remove the water content. Anyone who has listened to a hive during a nectar flow, knows that level of noise, which can be heard several metres away, involves a lot of wing beats. Those wing beats in the nest may actually wear the wings out faster than flying as it is being done so close to the hive surfaces and other honey bees7. Consequently, thermal efficiency changes how many honey bees lives are needed to make jar of honey.

By improving the thermal efficiency of the hives and the bee keeping practices we use, we can make the honey bees job of converting nectar into honey easier. This can mean significant improvements in survival of colonies and greater honey yields as confirmed by one of the largest bee farmers in the UK, who has thousands of expanded polystyrene and wooden hives to compare.

Honey bees exploit thermal physics on a prodigious scale to make honey, by following their lead we can use thermal physics to improve their thermal efficiency and so we help them, to help us.