Spring is trying to be in the air, but without much success. It was 22°F this morning when we got up. But the true first sign of Spring coming to Northeast Ohio is the Tri-County Beekeepers Conference held in Wooster at OARDC. It’s always the first Saturday in March and even if the weather is against us close to 1,000 beekeepers still show up. 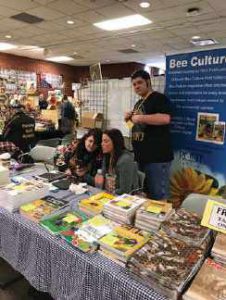 This year’s conference wasn’t hindered by snow, just cold so we all showed up and it was an incredible day. We had almost all of our Bee Culture team there and Kim was the keynote speaker this year. This is the first big meeting of the year and it gets us all in the mood to be outside and in the bees. All of the big vendors and lots of local folks are there selling their wares. It’s a day of seeing fellow beekeepers, helping beginners get ready and just talking about bees all day.

At the end of March we’ll be going to Cincinnati for the Southeast Ohio Beekeeping School. It’s a much smaller meeting, but still a good day of teaching beginners, selling books, talking to old friends. I get the added treat of being in the car for three hours with Kim and Jim Tew – usually Jim’s wife, Vallie is also with us, but this year she’s abandoned me.

We found out recently that we’ve lost another good friend. This job and beekeeping in general have connected Kim and I to so many people that we would never have met if not for the bees. And Peter was one of those people. 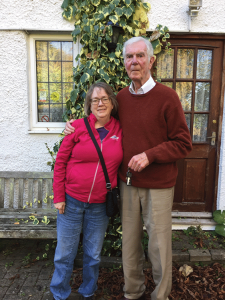 Peter Smith was very British. He lived in a small town near London. In 2003 he wrote and sent to Kim an article about swarming. We published it in the February issue of 2003. Then we were invited to the National Honey Show which at that time took place in downtown London. It’s always toward the end of October. So we made plans to go and in chatting back and forth with Peter found out he was also going to be a speaker. That’s when we got to meet him in person.

We quickly bonded with him. He was delightful. On that first trip to England, after the Honey Show he picked us up and drove us all around London and then to his home where we spent a few days with him and his wife. Then he took us to Stonehenge, to Wales, Bath, we saw Buckingham Palace. And became very good friends.

In 2005 when I was president of EAS held here in Ohio at Kent State University, we invited Peter over to be part of the meeting. He did a workshop on English hives and spent a few days before and after the meeting just visiting. He saw his first fire flies on that trip.

Between 2005 and 2017 we’ve made several trips to England and I think each time we were always able to connect with Peter and spend at least a day with him. Not only was he entertaining, but very smart. He was an engineer and in his younger days had travelled all over the world overseeing the digging of boreholes. Until I met Peter I had no idea what a borehole was.

Our last visit with Peter was in October of 2017 and the timing worked out that we spent his 87th birthday with him and had a wonderful visit – not knowing it would be our last in person. We miss you Peter. Thank you for being in our lives.

It’s time for you to start thinking about attending our October event. Please take a look at Page 15. Registration starts May 1. We’re celebrating the 150th anniversary of the A.I. Root Company and the History of American Beekeeping. We hope you can be here with us. A.I. and L.L. and C.P. will all be here.

The local feed stores have gotten their chicks and ducklings in. It seems a bit early and a bit too cold. So we’ll wait awhile before getting ours. I like it to be a little warmer before we bring those babies home. We’re at 16 hens right now. The one Rhode Island Red we had died about a month ago. She was from the original group so approaching seven years old this Spring. She had not acted sick or different but one day Kim went out to check on them and there she was, as if she had just fallen right off the perch.