Over an open colony of bees, Mike Roche told me how thankful he was to be alive. He was a man living past the years that his doctors had predicted. With the time limit on Mike’s life, he was grateful for the peace that working bees offered him. It was his wish to share that tranquility with military Veterans. Conversations we had while managing his bees were the foundation of the University of Minnesota Bee Squad’s beekeeping program for Veterans.

I met Mike and his wife Diane in 2013. They were founding Bee Squad Bee Network customers. The Bee Network was designed for non-beekeepers to hire the Bee Squad to manage their bees. In return, we learn about honey bee health trends and challenges. The Bee Network program initially served a handful of families and businesses and grew to allow the Bee Squad’s beekeepers to manage bees across greater Minneapolis-Saint Paul. While most customers do not manage bees, Mike had been a beekeeper since the 1970’s and accompanied us to his hives when he could.

Although he was Mike to us, his military title was Lt Col Michael Roche, USMC (Ret). His concern for US service members and Veterans was one of the three topics we discussed in the apiary. His family, including two active service member sons, and the bees were the other two. I remember Mike holding a frame of bees, hearing him talk to the girls and watching him smile, despite getting stung as his large fingers often challenged a worker bee’s space.

Mike asked the Bee Squad to create a program that would support Veterans through beekeeping. The Bee Squad delivered a proposal to him and Mike generously funded Bee Veterans. Modeled after our Mentoring Apiary, the yearly budget for the program has been between $10,000-$15,000. The Bee Veterans Apiary was established in the fall of 2015 and we held the first season of free Veteran beekeeping classes in 2016. Mike passed away in the spring of 2017.

From donating bees, boxes, land for an apiary, and seeds, our community has enthusiastically supported Bee Veterans. The Metropolitan Airports Commission provided an apiary space at the Minneapolis-St Paul International Airport. Our 5000 square foot apiary is home to 20 colonies. Pollinator gardens with abundant flowers share the space with the hives that are arranged in a large U shape so students can gather easily around them. People have responded with enormous generosity to the idea of using honey bees to assist Veterans.

The Bee Veterans program has supported over 100 Veterans since 2016. It is still funded by donations, many from Mike’s family and friends, and by the sale of honey. Some of the connections we make with Veterans are brief while others have had long lasting impacts. One of the first participants was Christian Dahm. A University of Minnesota undergraduate and retired Marine Corps service member, Christian joined the Bee Squad and managed the Bee Veterans Apiary. He then founded the Propolis Hive Company (https://www.propolishive.com/). Mike’s vision was for Veterans to have an opportunity to be inspired by honey bees. I have witnessed that the outcomes from Bee Veterans classes range from a memorable family outing to a career working with bees or beekeepers.

We are now responding to COVID 19 related program restrictions. Bee Squad mentors meet online to plan distance beekeeping education. Unable to bring Veterans into our apiary this season, we decided to replace the hive tools that we put into their hands with gardening tools. Instead of working bees, we are going to focus on establishing bee habitat. Through planting challenges and shared photos, we will encourage Veterans to promote bee-friendly flowers. We aren’t able to open up colonies together, but planting flowers is another way to get close to the bees.

Bee Veterans was not the first beekeeping program for Veterans and it does not have the biggest reach of the multiple efforts that exist. Because of a recent generous and anonymous $200,000 donation, we have the honor to create a space with the other groups that support Veterans in beekeeping. We initiated this collaboration with a roomful of Veterans and beekeepers at January’s American Beekeeping Federation meeting. Everyone shared their visions for how beekeeping can help Veterans. Some ideas, like using beekeeping as a therapy, still need to be examined with formal research studies. Other ideas, like educational programs and business support, will benefit from sharing resources across groups. We are committed to continuing these connections, exploring critical research, and building support for Veterans. Interested in being a part of Lt. Col Mike’s vision? Please sign up and join us. https://www.beelab.umn.edu/bee-squad/bee-squad-programs/bee-vets 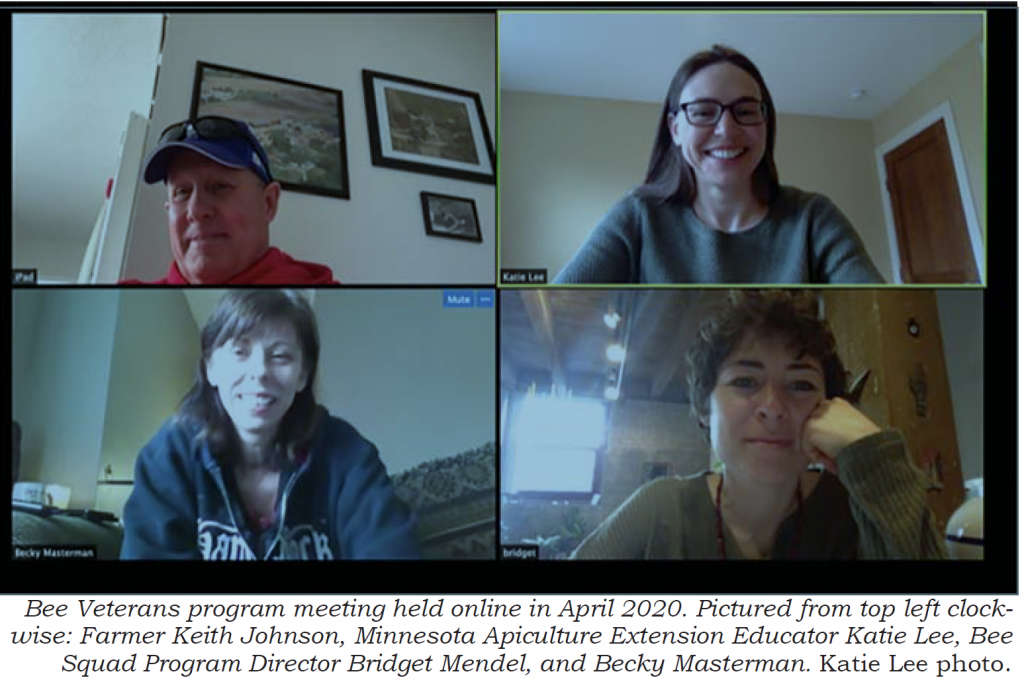 Bio
Becky Masterman earned a Ph.D. in Entomology at the University of Minnesota under the direction of Dr. Marla Spivak studying honey bee hygienic behavior and neurobiology. She led the UMN Bee Squad from 2013-2019 and currently alternates between acting as an advisor and worker bee for the program.

Acknowledgements
The author would like to thank both Marla Spivak and Bridget Mendel for their helpful edits and suggestions.

Bee Culture wants to apologize to the author for misspelling her last name in the May issue.