I traveled in early November with a small group of American beekeepers (ranging from hobbyists to commercial producers) to learn about Cuban beekeeping practices by visiting the Center for the Study of Apiculture (CIAPI) in Havana and several apiaries/queen breeding centers in eastern and central Cuba. As with any group of beekeepers, there were many questions and lots of cross-conversation, so this article is only as accurate as the notes I took at the various sites.

This is especially relevant when one considers the climates. Cuba is essentially a tropical climate with a wide variety of bee friendly plants blooming throughout the year. While U.S. beekeepers operate under different regional plant seasons, only the southernmost states are conducive to year-round active beekeeping. The rest of the U.S. beekeepers experience more weatherlimited active seasons and have to over-winter hives. Generally, the U.S. honey production is from about May – September. In contrast, the Cuban beekeepers we visited in Central and western Cuba, reported their honey dearth was from July- August with some of the highest honey production occurring during November-December. 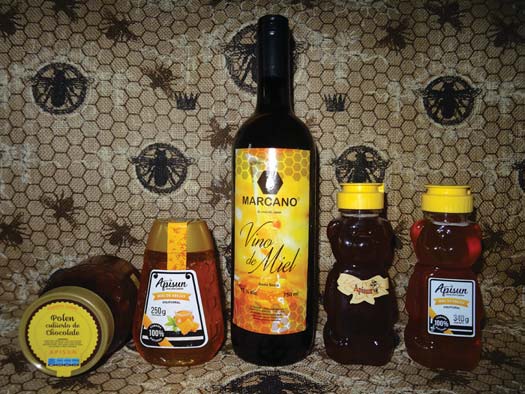 CIAPI is actively studying the effects of climate change on the sea level and how these changes will affect beekeepers in the future. Since the locations and numbers of hives are regulated, CIAPI knows the location of all the apiaries in Cuba and has already begun planning how rising sea levels will require their relocation.

While the basic apicultural practices are very similar to what we do in the U.S., there are several key differences between Cuban and American beekeeping. The primary difference is that all Cuban beekeepers are full time professionals who operate under the auspices of a national organization – Empresa Apicola Cubana (Cuban Beekeeping Company). Better known simply as Apicuba, it is the central government agency in charge of apiculture and honey production in Cuba. They provide training, research and resources to 1532 Cuban beekeepers, all of whom are registered with Apicuba. While the apiaries are privately owned and operated as part of cooperatives, there are no hobbyist beekeepers in Cuba and the number of hives, location, etc. are regulated. 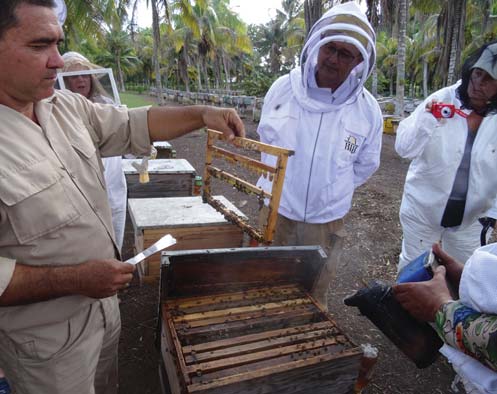 In this CIAPI certified queen breeding center of about 400 breeding nucs, over 450 queens
a month are provided to beekeepers in Cienfuegos Province. In addition to queen
rearing, they also breed drones in special hives and have already produced 556T of honey toward their 700T target.

Another important difference is the prohibition on the use of any chemicals in the hives. Control of Varroa mites (first found in Cuba in about 1996) is done by genetics and hive maintenance practices such as re-queening hives with high mite counts and frequent use of drone frames. No specifics were given on how mite counts are conducted or on how high mite loads were determined, but the primary means of controlling Varroa were segregating and requeening (brood break) infested hives in separate areas of the apiary. Some apiaries also appeared to use drone breeding hives to assist in mite control. It should be noted that all queens are raised in certified centers and sold to beekeepers at a cost of about $3. The beekeepers we visited all said they re-queen every one to two years and will routinely re-queen a low producing hive or mite infested hive.

A major goal of CIAPI is to protect “Cuban bees.” The importation of bees is strictly prohibited and sanitary zones around port areas ensure that the Cuban bee population is not contaminated by foreign bees. This prohibition is strictly enforced and, as a result, there are not only NO Africanized bees in Cuba, but the Cuban hives are populated by distinctly “Cuban bees.” Between 2015-2018, CIAPI certified 295 maternal and 261 paternal genetic bee lineages in eight Cuban provinces. Intensive genetic research, queen breeding center “breeding stock” certifications, successfully creating barriers to foreign bees, and ensuring only Cuban-certified queens are provided to apiaries, CIAPI has successfully created a “Cuban” bee which is very gentle and less aggressive.

Finca Coincedencia Apiary has developed special hive boxes for raising and producing stingless Melipona bees whose honey is usually sold for medical purposes. The boxes are about 10” square and 4 inches deep. There are no frames or foundation. The bees build honey “pots” out of wax inside the empty boxes and fill them with honey (the holes in the tops were caused when the outercover was removed and the wax caps of the honey pots pulled off).

In addition to uniquely Cuban bee populations in honey producing hives, two of the apiaries visited have created unique methods for raising stingless, in-ground dwelling Melipona bees for a limited harvest of their specialized honey. At the El Servi apiary in Caonao, they house a single hive in a glass dome which is kept covered by a light-proof hood, while at Finca Coincedencia Apiary special hive boxes for raising and producing the stingless bees have been developed. The boxes are about 10” square and four inches deep.

There are no frames or foundation. The bees build honey “pots” out of wax inside the empty boxes and fill them with honey. At both apiaries, the honey is harvested for use as a homeopathic remedy for eye ailments (the honey is dropped into the affected eye, not ingested). 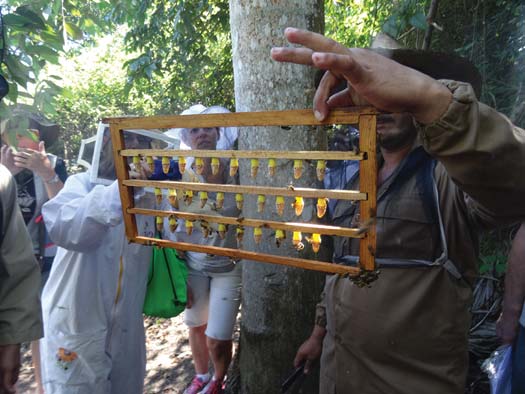 The honey is sold to Apicuba (some beekeepers keep a small amount to sell privately) which has two plants where the honey is fi ltered and then sent to the central Planta de Envasado (packaging plant) in Havana. It is sold and packaged primarily for export under the government Apisun label.