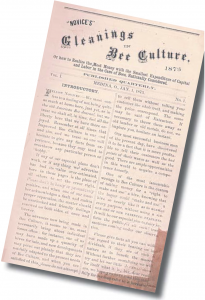 To make it a little more of an object for some beekeeper in every neighborhood to canvass his locality for subscribers, I agreed to make the price of Gleanings 60¢ for a club of ten names. This offer was not more liberal than many publishers made, and in many ways it seemed about right. Well, in those days of sharp competition in furnishing staple articles, there was much cutting under the agents were offering many periodicals at 75 percent of the publisher’s prices, or even less. They did not go around to the houses as publishers originally intended they should but transacted their business through the mails. In other words, they simply got the publisher’s customers away from him by announcing that they would sell cheaper.

Gleanings would have been advertised for 75¢ in its own columns, had I not refused the advertisement. Why did I not sell it for 75¢ myself? Why, if I charged one man but 75¢, I would have had to do the same with all.

I did not like to ask people to work for me without paying them, and for such work I wanted to be able to pay liberally. Still I was obliged to have but one price and to adhere to my printed rule, or else I should have been called dishonest. Several times I received 75¢ with the request to send Gleanings one year, at the same price that others were receiving or else return the money. Of course, I had no choice but to return the money.

I finally concluded that only 25 percent off the publisher’s price to agents would be about right. This left little margin for presents and premiums, but I felt it better to have the paper published and sold for what it was worth of itself.

The Value of Premiums

In the December number of Gleanings for 1877 I announced that I could not very well send a steam engine for hive-making as a premium for renewing a subscription before January 1, for one reason because I could not get it into the post office; and besides, I was afraid someone might take the journal for the sake of the engine, and not for its own intrinsic value. Seriously, this is the way I felt about it. I wanted my readers to subscribe for Gleanings because they wanted it.

However, in spite of my former attitude toward premiums, when the Waterbury watch factory started, the manufacturers were anxious to get their watches into the hands of the people exactly as I was anxious to get Gleanings into the hands of the people. They found out how Gleanings had made its way even into foreign lands, and into the hands of good, kind people and they decided that instead of spending great sums of money in newspaper advertisement they would rather give the watch at a very low price to someone who would and could make known its good qualities as I did. This enabled me to pay handsomely the friends who worked among their neighbors for the up building of the journal; therefore I gave a watch to everyone who sent me five new subscribers at a $1.00 each. A great boom in the subscription list came from that offer of a watch for five subscribers. In December, 1881, I sent out a gross of watches in only five days. 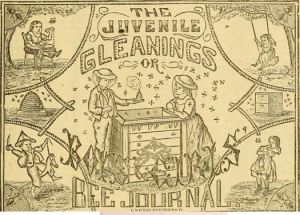 I announced that those who wished their paper continued without interruption would please remit for the next year shortly after the December number was out. As I did not wish to intrude it on anyone not wanting it, I took it for granted that all who did not remit before January 1 wished it discontinued, therefore no one needed to take the trouble to write me if they wished their subscription stopped. This applied also to “Our Homes.” After two installments any reader could tell whether they desired it for the next year. If so, the extra 25¢ was to be remitted before January 1.

In 1875 I gave 16 pages of reading matter per issue for 75¢, and the next year 24 pages without counting the four pages of “Our Homes,” for $1.00. Furthermore, I decided that all who paid only 75¢ at the beginning of the year could send the extra 25¢ or not as they chose. The main point was that no charge was made to any one for the Home department, and the 25¢ extra, therefore, had no reference to it. I wanted these four pages to be a free gift.

I considered it a duty to prune all matter sent me for publication and I always took this liberty when necessary, unless forbidden, and in case of copy where pruning was forbidden, I reserved the right to throw it into the waste basket if I thought it needed pruning. If articles were to be returned back if not accepted, I wanted that fact mentioned and stamp enclosed.

I never wanted Gleanings to be the vehicle for unprofitable controversy, and as I might err in trying to guard against this I announced that I would freely return the money to any dissatisfied subscriber for all unexpired subscription.

Gleanings Ruled Out of the Mails

In 1879 the editor of our county paper was also postmaster. He remarked that my journal was but an advertising sheet, and it ought not to be allowed to go through the mails at journal rates. I thought this pretty hard but allowed the subject to pass by. 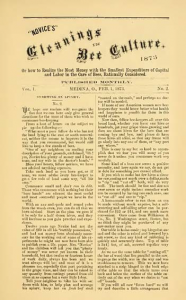 A few days afterward he came to me with an official paper bearing the stamp “Washington” and signed by the Postmaster General, declaring that the publication known as Gleanings in Bee Culture had been declared unmailable at pound rates under the section including periodicals whose primary purpose was to advertise the editor’s business. I remonstrated and asked who it was that decided such matters. He showed me a law wherein this duty was assigned to the postmaster where the magazine was mailed and he stated that he had pronounced it an advertising sheet, but to be sure, had mailed a copy to Washington and they had also so decided.

I made inquiries of those who should know in regard to getting such a decision revoked, but it seemed pretty certain that a decision made by the Postmaster General, whether right or wrong, was seldom if ever recalled. I asked our postmaster what feature of my journal I should remove in order that it might pass through the mails. If I recall aright, his reply seemed to indicate that it was all objectionable.

In thinking the matter over it occurred to me that God had sent this trial to caution me in regard to selfishness and that Gleanings might be remodeled into shape where it would do more good. I wrote briefly to the Postmaster General asking what features of our journal must be omitted to allow it to pass through the mail, sending copies of our letterheads, envelopes, etc., consenting to omitting all mention of the manufacturing business as well as every advertisement of anything I had for sale in its columns if this were demanded, and I closed with something like this:

“I do not know to whom I am writing, whether it be to one who believes in the Bible and Jesus Christ, or not; but if I know myself, the primary purpose of Gleanings is to serve the Lord Jesus Christ and to benefit my fellowmen and especially to this end are the last two leaves devoted. In behalf of the hands I employ and the many whom Gleanings helps, I beg that your decision may be reversed.”

The decision excluding Gleanings came just after the April number, 1879, was mailed. Before the May number was out, one of the clerks called from the top of the stairway saying, “Good news,” and sent a paper floating down which fell at my feet. I raised it and read that the decision of April 1,1879, excluding the publication named Gleanings in Bee Culture, from going into the mails at pounds rates was revoked. Furthermore, the news also came that instead of paying three cents a pound, as I had heretofore, Gleanings could go at 2¢ a pound, and sample copies for which I had before paid eight cents a pound, could also got for two cents a pound. The greatest motive I had in sending out the sample copies was to get the last two pages containing the Home Papers scattered around where they might do good.

In the middle of April, 1882, I got out a supplement of Gleanings, which I called the Juvenile Gleanings, or Boys’ and Girls’ Bee Journal, the first number of Gleanings ever printed in the middle of the month. Later on, I decided to make the Juvenile Gleanings double its former size so that it would be as large as the regular Gleanings. Since many of the little folks read Our Homes I thought it might be just as well to have Our Homes in the Juvenile number, thus the old Gleanings could be all bees. No one could make any objection if I threw in the Juvenile without any additional charge; also no one could dispute my privilege of making it just as I wished, partly for old and partly for young folks. Finally, the juvenile feature was dropped, the mid-month number being the same as the number issued the first of the month.

Purdue researchers found that honeybees collect pollen from a wide range of plants, even in areas dominated by corn and soybeans. Credit: Purdue University/Tom…