Farming Is Always An Uphill Battle

Pandemic resistant honey sales
The Covid-19 pandemic has impacted our world in profound ways, none more so than our economic system. Many beekeepers saw their markets dissolved overnight. People have become afraid of venturing out in public and state and local governments have enacted temporary bans on public gatherings and business activities considered nonessential. Restaurants were temporarily closed and limited to curb-side pick up. Many institutions suspended operations. Farmer’s markets went on a forced hiatus. Meanwhile Tyson Foods took out full page ads in the Washington Post and the New York Times claiming that “the food supply chain is breaking” and millions of pounds of meat was about to disappear from the supply chain as huge meat packing plants owned by Tyson Foods, Smithfield Foods and JBS are forced to close due to almost 12,000 of their workers contracting Covid-19 and dozens dying from the virus. In response, President Trump issued an executive order reopening the closed plants and now meat-packers no longer release data on how many workers are sick or dead from the corona virus. They have stated that they will close if more than 10% of their workforce gets sick. One could get the impression that these mammoth food operations are more focused on profits than the health and safety of their employees. 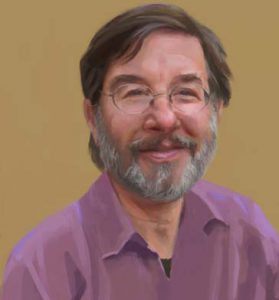 An Alternative Model
One bright spot in our food system is the direct to consumer model of the Community Supported Agriculture (CSA) operation. Since the carona virus pandemic hit, CSAs around the country have reported a large surge in the number of people signing up for locally produced food.

CSAs are agricultural operations that are supported by people within the community who share both the benefits and risks of food production. Similar your Bee Culture subscription, CSA members pay for their CSA subscription upfront in the beginning of the season and receive a regular share of the farm’s output throughout the rest of the year. This provides valuable capital for the farmer early in the season when the cash flow is typically low and expenses are high, and in return the CSA member receives a better deal on local food direct from the farm than they would get by simply purchasing similar products from their local grocery store.

Farming is always an uphill battle, and CSA members also share in the inherent risks associated with agriculture. If the farmer’s crops fail, the CSA member is obviously not able to obtain the bountiful share of the harvest that had been anticipated.

Food Quality and Safety
Despite the inherent risks, consumers are being drawn to CSAs in record numbers as people seek out high quality nutritious foods. Food grown locally is fresher and therefore tastes better and is more nutritious.

There is also a greater sense of safety when folks have special access to their food supply, know where their food comes from, and know who is involved in producing it. There is also peace of mind in the knowledge that fewer hands are touching your food before it arrives in your kitchen.

Rebuilding the Economy
The economic upheaval caused by the pandemic has motivated folks to want to do more to support their neighbors and community. Money spent at your local farm tends to circulate within the community at a much higher rate than money spent at national grocery store chains which siphon money out of a community. The increased local circulation of money creates a multiplier effect that helps create more local jobs, higher local wages and increased tax revenue for local governments, all of which may lead to a better standard of living within a community.

This pandemic is proving that small-scale and local foods systems are able to adapt to shocks to our food system much quicker and more successfully than the large scale industrial systems. These smaller localized food systems and their shorter supply chains are more resilient and are more reliable during economic and social upheavals. Who would you rather place your trust in, your neighborhood and community producers or the John Tysons of the world?

Local is more Environmentally Friendly
Locally produced food has great appeal to the environmentally conscious consumer as well. With fewer food miles travelled from farm to plate, local food has a smaller carbon footprint. Because there is no tilling, planting, cultivating and fertilizing involved in beekeeping, locally produced honey has one of the smallest carbon footprints of any food you can buy.

Less food is wasted when it is produced locally and not having to be shipped thousands of miles. This is a major concern considering that the USDA estimates that 30-40 percent of our food is wasted and about 40 percent of that food waste occurs during transportation and storage. Reducing food waste was identified as the third most important action we can take to address global climate destabilization by the coalition of scientists that assembled the most comprehensive plan ever proposed to reverse global warming titled Drawdown and edited by Paul Hawken. 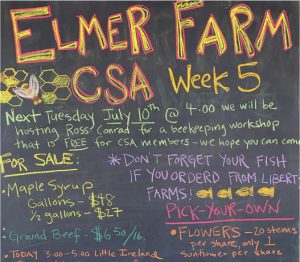 CSAs enhance their relationship and value to their
members by
offering educational events and
products produced by other local farms.
(Photo courtesy of Jennifer Blackwell, Elmer Farm,
Middlebury, V

Relationship Building
As an alternative socioeconomic agricultural model, the CSA closely connects consumers and producers in a way that builds close relationships that are long-term and strengthen the sense of community through local markets. This strong rapport helps build customer loyalty which in turn helps prevent sales declines, buffering the financial volatility that can occur during difficult and unpredictable times.

CSAs can be organized as a single farm, or a group of farms. Participating farms often seek to cultivate the producer – consumer relationship through regular newsletters with the latest about what is happening on the farm, open farm events and educational activities, or by inviting members to come to the farm to observe or even assist with the harvest.

Most farms simply charge a set fee for the seasons share, often offering different size shares to accommodate different size households. While most farms collect payment in the beginning of the season in return for a prepared box of farm produce, other farms work on a debit system and while payment is also made upfront the value of what folks choose on pick up day is simply deducted from their account balance. Some CSAs will even allow members to exchange labor in return for a discount on the cost of their share.

Produce and other farm goods are most often picked up or delivered weekly, but may also be organized around bi-weekly, monthly, or even a quarterly schedule. While many CSAs provide food from a single farm, single source CSAs may also make available other local farm products that they don’t produce. Such add-ons are available either as part of the weekly share received by all members, or as separate items available for purchase on pick-up/delivery day. This helps create a more convenient one-stop shopping experience for participants making the CSA even more attractive and useful for food shoppers.

How can Beekeeping fit in?
Herein lies an opportunity for the enterprising beekeeper looking to add more resilient markets to their distribution networks or simply replace lost markets due to the pandemic. The simplest way to take advantage of the current growth and interest in CSAs is to supply your local CSA with honey. It is relatively easy for an existing CSA operation to make additional products from other farms available for sale to folks when they are picking up their regular CSA shares. This option is especially attractive if you maintain an apiary on the farm that offers the CSA. Your bees are already part of their farm story and participate in the production of the food being produced. This type of option may also be attractive to non-CSA farms that have a busy farm stand and are open to including your honey and value added items to their product offerings.

Beekeepers who do not live near a CSA or who are ambitious may want to set up a CSA of their own offering not just honey, but additional value added products from the hive such as beeswax candles, salves, or propolis tincture to shareholders on a monthly or quarterly basis. Offering shares of the harvest from an entire apiary rather than specific hives will go far in mitigating the chance of not successfully supplying CSA customers with an adequate share from a single hive that gets hit by a bear, swarms, becomes a drone layer, or collapses from mites, disease, or CCD during the season. A longer time between distributions may be more appropriate for honey CSAs that do not produce the kind of wide variety offered by your typical vegetable farm and what is produced is not usually used up on a weekly basis. If you are located on a well-travelled road, setting up your own honey farm stand may also be a viable option.

Of course local food is not the whole answer as our family farmers cannot supply us with the coffee, bananas, chocolate, and other imported foods we consume as a society. However as Americans proved with their victory gardens during World War II, we could be producing a lot more of the food we eat regularly than we currently do while creating many decent employment opportunities in the process. Just as we need honey consumers supporting their local beekeepers, we need to support our local vegetable, fruit, grain, dairy and meat producers. (Full transparency: I prefer a vegetarian diet, but do not hold this against carnivores.) 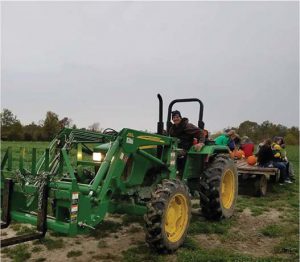 Spencer Blackwell of Elmer Farm takes some of the his CSA member families on a fun wagon ride around the farm.
Photo courtesy of Jennifer Blackwell, Elmer Farm,
Middlebury, VT.

A Changing Paradigm
Subscribing to a CSA can be a lifestyle change for consumers. It means eating more in season, learning to cook unfamiliar vegetables, and knowing the names of the people who produce the food their families eat. People who are quarantined or self isolated at home are learning to cook again. Before the development of the industrial food system, almost all food was produced and consumed locally. We can only hope that this resurgence in the reliance on local foods and recognition of the importance of local farms solidifies instead of returning to business as usual once the current pandemic passes.

The local food movement is growing nationwide. This movement is part of a badly needed paradigm shift in order for farms to remain viable in face of the multiplying disasters to come – not only from this and future pandemics, but floods, droughts, fires, hurricanes and other symptoms of climate destabilization. Such collaborations between local farmers and consumers could mark the beginning of a new agricultural economy laboring to be born. One based more on the cooperative spirit of the honey bee colony than the rugged individualism and competition of our capitalist society.

Ross Conrad is the author of Natural Beekeeping and The Land of Milk and Honey and is a member of his local CSA in Middlebury, Vermont.