By: Becky Masterman and Bridget Mendel

Finding Nadja’s Minneapolis home on a Summer day does not require house numbers. Just drive until you find the bee food. From the sidewalk, a terraced slope riots with pink phlox, orange tiger lilies, lupine, white culver’s root, and various milkweeds. Bees of every shape and size think they are in heaven. Looking closer, Nadja will point out funny little native woodland ephemerals – like bloodroot and yellow lady slipper – that she’s coaxed to live in the shade of evergreen trees. There are wild strawberries, beds lined with giant sunflowers, and lots of berry bushes. Her modest house hides among the gardens. You might not even notice the two honey bee colonies the Bee Squad established in May of 2014 on her rooftop.

Like most of our Bee Squad Bee Network customers, Nadja is not a beekeeper. But she is one of the best bee advocates we know. Over the years, Nadja’s bees have seen a surplus of honey most years along with robust Varroa infestations. It was in some of our newly established honey bee colonies in 2014 along with Nadja’s that sounded the Varroa alarm for us. We saw confusingly high numbers of mites in colonies in the late Summer and Fall that resulted in early colony death, despite surplus honey and enough stores for a Minnesota Winter (75-100lbs). In some years, we have documented entombed pollen (pollen likely contaminated with an fungicide called Chlorothalonil (vanEngelsdorp et al. 2009), small hive beetles, and symptoms that suggest chronic bee paralysis viral infections in her colonies.

Nadja standing by volunteer lupines that joined her backyard. (photo by Jenny Warner)

Nadja always approaches these various episodes with curiosity and a dedication to helping bees beyond her rooftop. She talks to her neighbors about eliminating the use of pesticides in home gardens, and writes passionate emails to her networks about honey bee health, mites, and planting for all bees. She volunteers with our Bee Veterans apiary (see Veteran Mike in the June 2020 issue of Bee Culture), quietly tending to the gardens there, adding natives, or weeding.

One exciting day in 2017, Nadja’s bees delighted the neighborhood by swarming. All who saw it were enchanted with the magic of a swarm. We were less excited about the colony’s reproductive success in the middle of a city, and decided that we would manage her bees in three deeps going forward. The University of Minnesota Bee Lab’s Beekeeping in Northern Climates management system includes both two and three deep colony management. The three deep method is a great beginner strategy to ensure that the bees have enough honey for the Winter without having to feed in the Fall, and it gives the bees additional space under the honey supers to discourage swarming in areas where it is less than ideal.

It is exciting to see a thriving city colony bring in so much nectar that they run out of space. It’s as equally devastating to see a beautiful, thriving colony collapse in the Fall. These are both sides of the same coin in Minneapolis, a city that loves bees. While many plant food for bees, many also become beekeepers, creating a density of colonies that brings its own risks. Mites spread between colonies, and, with the various management strategies of city beekeepers, mites and the viruses they vector can collapse new package colonies established on foundation by the Fall.

One issue city beekeepers face is that it’s hard to know how many colonies are in your area – let alone to develop a shared community management strategy. With our Bee Squad Bee Network program, we “monitor” different areas of the city by keeping hives there, to get a better sense of mite and other health trends. On the one hand, we are adding colonies to a landscape already saturated with bees; on the other, we are collecting information on various zip codes that can help us manage bees and teach beekeeping better. While we don’t know how many honey bee colonies live in the city of Minneapolis, tracking (and limiting) these numbers in cities might be a good way to protect native bees while ensuring the ability to keep city bees.

Beyond this, honey bees start conversations. People see those stacks of boxes and ask questions. Neighbors get involved with planting, or change their perspective about bees from not wanting to get near them, to leaving out water baths for their pollinator neighbors. Our Bee Network hosts also become scientists in their own right. While working in her gardens, Nadja spends hours closely observing her bees in a way beekeepers can forget or not have time to do. She notices when lots of bees are orienting to the hives, when they are bearding, and what they are visiting most in her garden. As conversations abound about the role of honey bees in the U.S. (are they negatively impacting native bees? Are they livestock? Wild? Are they pets?) Nadja gives us a beautiful answer. They are part of her personal ecosystem, where their role is to pollinate flowers and make honey, and Nadja’s role is to share that honey with neighbors, speak out about the issues bees are facing, and plant flowers on behalf of the neighborhood bees.

Some of Nadja’s Favorite Flowers for Pollinators:
Angelica (not native but important; the honey bees love Korean angelica)
Culver’s Root (the digger wasps go ga-ga for Culver’s root, too)
Hyssop (bumble bees love it)
Tithonia (top flower for butterflies, blooms July through first frost)
Zinnias (loved by hummingbirds)
Milkweed (swamp, common and butterfly)
Mammoth sunflowers (the honey bees love the pollen
Chocoholic snakeroot (this is a cultivar the bees like that blooms into the fall.
Raspberries (yum! and good habitat for native bees)

Acknowledgements
The authors would like to thank Dr. Marla Spivak and Nadja for helpful edits and suggestions.

Authors
Becky Masterman led the UMN Bee Squad from 2013-2019 and currently alternates between acting as an advisor and worker bee for the program. Bridget Mendel joined the Bee Squad in 2013 and has led the program since 2020. (Photo of Becky and Bridget from 2014). 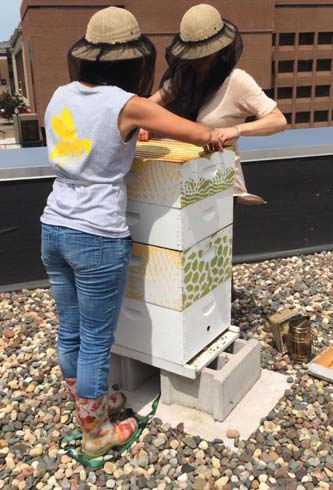