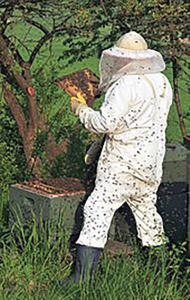 The Beekeeper’s most common complaint, after the cost of equipment, bad queens, government idiots, and low honey prices, is that bees don’t read and follow the advice of how-to bee books. They swarm in spite of the most modern swarm prevention methods. They reject the queen you just bought for $40. The more time you spend inserting expensive chemicals into your hives to kill pests, the more dead bees and empty moldy equipment you have in the Spring.

It turns out bees do read books – of sorts. I discovered this one day as I studied the mysterious washboard dance on the front of the hive. It resembles computer assembly language and as I watched, I started to make out common patterns. I made a digital recording, then downloaded Google’s washboard dance/ English translation program (the free version). Imagine my amazement when I discovered this:

How to Manage Beekeepers

The most serious threat facing bees today is the common Beekeeper (Homo destructor). No doubt you’ve seen these vile creatures peering down at you after ripping off your roof. They smell like smoke and cover themselves with a synthetic, stingresistant skin. Beekeepers cause more destruction to honey bees than Colony Collapse Disorder, Varroa mites, American foulbrood, Nosema ceranae, and bears combined. They inhabit every continent and efforts to eradicate them have largely failed. It is, therefore, to the bee’s advantage to understand the habits and control methods for this virulent pest.

Beekeepers consist of only two castes, queens (females) and drones (males). Unlike bees, nearly every female is a fertile queen. Most astonishing is the fact that these queen-like workers don’t kill each other when they come in contact. Females apparently produce a pheromone which inhibits this natural tendency, although some researchers have observed frequent aggressive behavior in both worker/ worker and especially in worker/ drone interactions. It is believed that human queens are less fertile than honey bees, laying less 1000 eggs per day. They can live up to ten years and possibly even longer.

Drone beekeepers have two primary functions: robbing honey bee colonies and mating with the females. Emerging science suggests the shocking claim that male beekeepers survive mating and that mating occurs multiple times. Females don’t drive them out in the Fall and they continue to consume valuable stores year round! It seems not only contrary to the law of natural selection, but also a powerful argument against the theory of Intelligent Design.

Beekeepers, with their poor sense of smell, must use more rudimentary forms of communication. They do this with a complex series of sounds emitted through the proboscis (an orifice located on the lower portion of the head) by exhaling foul gases produced in their respiratory system, and moving the air over and between various mouth organs. Beekeepers also use visual communication – a series of shapes printed on sheets of compressed wood pulp, called “books”.

Beekeepers, like mites, can’t be eradicated. Therefore, bees must strive to minimize their damage. Beekeepers aren’t content to just remove a portion of our honey and pollen to feed to their young. They paw through the brood nest, rearrange combs, pack us onto large conveyances and move us to distant areas with poor food resources, insert dangerous chemicals into our colonies, and spread diseases across the globe – then wonder why we die. In an attempt to save us, they again paw through and rearrange our combs and insert ever more deadly chemicals into our hives with contaminated gloves and hive tools. It makes you wish you could sting them multiple times.

Our best defense is our stinger. Pretend to be gentle until the beekeeper has torn your hive into pieces, then send out waves of kamikaze bees while he or she tries to put it back together. To discourage beekeepers, find gaps in their protective covering. For example, when beekeepers squat or bend over, a large gap frequently opens on their lower back between the shirt and trousers. Better yet, try entering clothing between the sock and trouser cuff. Upon entering a pant leg, always crawl up, working your way to the inside of the leg. Once you pass the knees, continue upward. Beekeepers will become anxious, and will quickly replace the hive cover and leave the area.

The beekeeper veil may seem to be an impenetrable barrier, but beekeepers rarely replace old veils. You can frequently gain access to the face through an opening in the metal-fatigued screen. Once in, don’t sting immediately. Make a few orbits around the head or burrow into the hair. This gives other bees time to find the hole in the veil while the beekeeper fl ails his arms, attracting still more bees and increasing his personal distress.

When stinging, aim for areas with concentrated nerve endings, such as lips, the tip of the nose, and ears. Look for and enter orifices such as ear canals, nostrils, or the oral cavity – particularly effective if entered during an intake of breath caused by another bee crawling up the inside thigh.

Swarm early and often. After swarming early, swarm late. When swarming, don’t settle too high or too low. Beekeepers have a selfpreservation gene and will reject a swarm 50 feet high. Settle somewhere between nine and 49 feet. Beekeepers are quite clumsy and when falling from that height, they frequently don’t get up, like mites falling on a sticky board.

Try swarming in the rain. If you are caught, your natural instinct is to chew the foundation right down to the wires. It costs beekeepers about a dollar a sheet. If your beekeeper uses plastic frames, find some American foulbrood spores and spread the disease through the brood nest. Beekeepers hate that.

Don’t make honey, or make too much honey. Disappear, leaving only the queen. Ball your queen for no apparent reason. Move right in with the beekeepers. Human colonies have lots of spaces between the walls that make excellent cavities for bee colonies.

Beekeepers, because they possess virtually no instinct, rely heavily on books to survive and to manage bees. This means they don’t respond quickly to subtle variations of conditions as we do. Books don’t change quickly and once one is published it can’t be updated easily. This means that the honey bee’s best defense against Homo destructor is the numerous how-to bee books in print.

Unfortunately the translation stopped abruptly when the bees noticed my cell phone recording them. Two bees suddenly flew up my pants legs while a third found the gap between my shirt and pants. A fourth found a hole in my veil and stung the end of my nose. I broke a new record that day when I leaped over the electric fence, clearing three of the four wires. I wish I’d remembered to shut off the electricity.