I saw a discussion on the internet that asked how to use the extractor that a person had purchased. That started me thinking about all of the extractors out there and some of the things that people don’t usually think of. 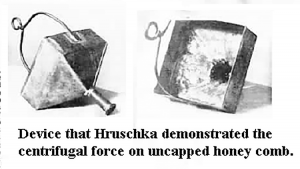 Credit is being given to Major Franz Elder Von Hruschka for inventing the first honey extractor.  It consisted of a special tray on a rope and you would place honey comb in the tray and swing it around your head. Presto, the honey would separate from the comb and settle in the bottom of the tray. Or maybe I should say that the honey would separate from the side of the comb that is on the bottom if the cappings had been disturbed. The honey above the center rib would be trapped by the comb.  In order to get it, you would have to pry the comb away from the tray, turn it over and spin it again. It sounds like an activity that should definitely not happen in the kitchen. Now how fast do you have to spin the tray? What would happen if the rope broke or became un-tied? Okay let’s move outside and swing it near the bees.  Bees just love to pick up movement with their compound eyes. They might even teach you a new dance while you are trying to extract honey. 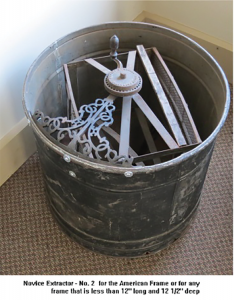 Maybe that is why you haven’t seen one of those early extractors for sale. However there were two U.S. Patents issued for similar devices.

I looked in the 1879 Root catalog and I found that there were 10 different extractors for sale by the A.I. Root Company and it depended upon what type frame you were using as to which extractor you should purchase.  For instance, No. 1 extractor was for the Gallup frames or any frame that was 11½ inches long and not more than 12 inches deep. No. 2 was for the American frames. No. 3 was for any frame not more than 12¾” long and 12½“deep. No. 4 was for the Adair frames. The list keeps going up to 10. Thus you start measuring frames to see what size extractor you need. It could put you in a jam if you have all kinds of different sized frames.  The extractors’ No. 1 to 4 had short cans and the frames were placed in the extractor just like they would sit normally in the hive. So the frames rested on the ears and the side of the frame was against the screen. On extractors No. 5 to 10 the frames were placed in the baskets so that the top bar was vertical.

The discussion usually begins as to which way you should turn the crank to get the best results in extracting honey? The correct answer is to spin the frames so the bottom bar leads the way, but honey will still be spun out if you spin the frame in the other direction. 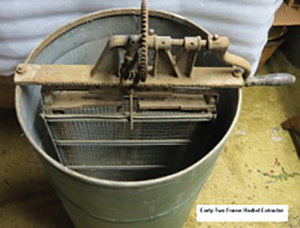 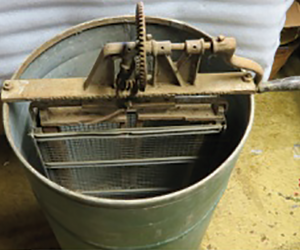 Oops, let’s think about this a moment. When bees build comb, they build the cells sloping upward from the center rib at an angle of 10 to 14 degrees. So when a frame is placed in an extractor on the cord or as it usually rests in a hive and spun there is a slight blockage of honey by part of the comb. That is because the vector force is straight out from the center of the extractor. If you turn the frame 90 degrees and put the frame in the tangential extractor you have some natural draining being accomplished by gravity but now you have another force caused by the air that is meeting the comb in the spinning motion. However it is slightly better than the extractor where the frames were put in horizontally. 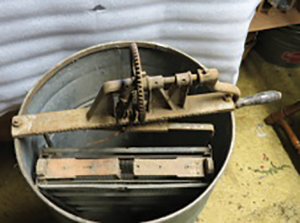 There is another kind of tangential extractor sometimes called a reversible. This extractor has swinging baskets that hold the frames. Some of the extractors in this category require the operator to stop the extractor and turn the baskets while others have a brake and all you do is slow slightly, hit the brake and all the baskets will swing at the same time. Usually you continue to turn in the same direction, so think about the angle of the cells and the efficiency of the extractor. At one time you are spinning the frames in the best direction and after the reversal you may be spinning in a less efficient direction. One way to solve this problem is to reverse the direction the frames are spun at the time that the frames were reversed. However I am talking about theory and measurable results and is it worth the wear and tear on some of the extractor parts and can you actually measure the difference? You are rarely going to get absolutely dry combs out of an extractor.

The best way to dry the combs or frames is to put them in a super on top of a hive and let the bees clean them up. You want to avoid open robbing as it may lead to hives being robbed and nastier tempered bees. Remember to remove the empty frames or supers before Winter.

The Buckeye Extractor was an interesting extractor as it had four baskets on the hand powered model and six baskets on the powered model. The baskets were linked together and by hitting a lever you could reverse all baskets at once even under full speed. Because it was a tangential extractor, it also had the problem of achieving the best vector force due to the cell angles. The reason that we don’t see many of these extractors is due to the fact that the Radial extractors or Simplicity extractors, as the Root Company called them, were introduced about the time that the Buckeye Extractors were being marketed.

A precaution one should take in using a radial extractor is not to double stack the extractor. Double stacking is the practice of putting a frame in between the frames that are seated in the reel. Yes, it would seem that spinning the honey out of 24 frames, rather than 12 on each load would make a quicker job of extracting. However every cycle must be spun longer because of the extra frames and the chances of an overbalance problem or a frame slipping out of place exist. Overbalancing an extractor may lead to wear and tear on the bearings of the extractor and some of those bearings are very difficult to find replacements.

The Two Frame Waponketa Extractor was made by Standard Churn Company and was ahead of its time in some respects because it was a two frame radial extractor.  People that own one of these extractors might think that it is a one frame extractor because it has only one basket. The basket is 12 inches wide so you can use only two of the shallow frames or two of the half depth frames. If you tried to use one full depth frame, you would find that the extractor would not perform satisfactorily.

Because the “Medium” depth frames measure 6-1/8” deep, they won’t fit unless you shave them slightly. To load the frames, you turn the center yoke upward to clear the basket. The basket tilts outward so you can load and unload the frames. Make sure that the top bars of the frames are next to the end of the basket. Put the basket back in the vertical position and turn the yoke in to the spinning position.

The Cabinet extractor is an extractor that has a horizontal central shaft and the frames are put into frame holding areas that will allow the frame to be spun longitudinally around the shaft. There is virtually no vibration with this type of extractor. However it is a very heavy machine due to many cast steel pieces.

The commercial extractor was developed so that you can load several frames, usually a super full, at each extractor position from the conveyor. The extractor has a horizontal shaft. The advantage to this type of extractor is the loading and unloading of the frames plus the out of balance problem is much less. Most of the other extractors tend to walk when there is an out of balance problem so they may have additional weights put on the extractor or be chained to the floor.  Some have found that a triangular foot system is much better than the four foot method.

There was a High Speed extractor built for extracting honey from combs such as Permacomb. Permacomb is/was a plastic frame with fully drawn cells. The main idea with this type of extractor was that it would spin the frames so fast that the cappings would be blown off of the cells. Therefore you would save time by loading the frames into the extractor directly from the supers and no time would be spent on uncapping. Sounds good but the beekeeper needed to be watchful of the extractor and check on the bearings and loose bolts as the extractors had been known to fly apart.

As you can see there are types of extractors and methods to harvest the honey. Theoretically there are problems with most of them because of the cell angle or construction. However the general centrifugal force is usually great enough to extract the honey from the comb and overcome those smaller forces.

Jim Thompson is a long time beekeeper, historian and collector of beekeeping equipment. He lives in Smithville, Ohio.

By: Phil Craft With all the challenges facing honey bees and beekeepers today, Varroa mites are still the greatest threat. Last month, in my…