QUALITY, QUANTITY AND DIVERSITY ARE ALL IMPORTANT 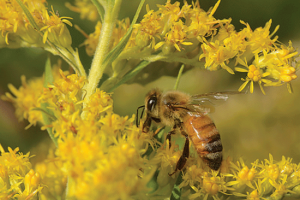 Honey bee worker energy reserve levels are correlated with task performance in the colony.  Nest workers have abundant stored lipid and protein while foragers are depleted of these reserves; this depletion precedes the shift from nest work to foraging. Toth et al. (2005) tested the hypothesis that lipid depletion has a causal effect on the age at onset of foraging.  They found that bees treated with a fatty acid synthesis inhibitor (TOFA) were more likely to forage precociously. The second objective of this study was to determine whether there is a relationship between social interactions, nutritional state and behavioral maturation. Since older bees are known to inhibit the development of young bees into foragers, they asked whether this effect is mediated nutritionally via the passage of food from old to young bees. They found that bees reared in social isolation have low lipid stores, but social inhibition occurs in colonies in the field, whether young bees are starved or fed.  These results indicate that although social interactions affect the nutritional status of young bees, social and nutritional factors act independently to influence age at onset of foraging.

Parasites often modify host foraging behavior, for example, by spurring changes to nutrient intake ratios or triggering self-medication.  The gut parasite, Nosema ceranae, increases energy needs of the Western honey bee, but little is known about how infection affects foraging behavior. Ferguson et al. (2018) used a combination of experiments and observations of caged and free-flying individual bees and hives to determine how N. ceranae affects honey bee foraging behavior. In an experiment with caged bees, they found that infected bees with access to high-quality pollen were more likely to survive than infected bees with access to  lower quality pollen or no pollen. Non-infected bees showed no difference in survival with pollen quality. They then tested free-flying bees in an arena of artificial flowers and found that pollen foraging bees chose pollen commensurate with their infection status; twice as many infected bees selected the higher quality pollen than the lower quality pollen, while healthy bees showed no preference between pollen types. However, healthy and infected bees visited sucrose and pollen flowers in the same proportions. Among hive-level observations, they found no significant correlations between N. ceranae infection intensity in the hive and the proportion of bees returning with pollen. Their results indicate that N. ceranae-infected bees benefit from increased pollen quality and will selectively forage for higher quality while foraging for pollen, but infection status does not lead to increased pollen foraging at either the individual or hive levels.

Lach et al. (2015) determined the impact of Nosema apis on honey bee foraging trips. They individually fed 960 newly eclosed workers either a sucrose solution or 400 Nosema apis spores in a sucrose solution and tagged them with a unique radio frequency identification (RFID) tag to monitor their foraging behavior. They found spore-fed bees were less likely to forage than those fed sugar only.  Those that did forage started foraging when they were older and stopped foraging when they were younger than bees fed sugar only.  However, inoculated and non-inoculated bees did not significantly differ in the number of foraging trips taken per day, the total hours foraged over their lifetime, or homing ability.  Inoculated returning foragers were 4.3 times less likely to be carrying available pollen than non-inoculated returning foragers and the number of pollen grains carried was negatively correlated with the number of N. apis spores. In an arena of artificial flowers, inoculated bees had a tendency to choose sugar flowers over pollen flowers, compared to non-inoculated bees which visited pollen and sugar flowers equally.  These results demonstrate that even a relatively low dose of a widespread disease may adversely affect bees’ ability to pollinate flowers.

Honey bee workers consume a variety of pollens to meet the majority of their requirements for protein and lipids. Recent works indicates that honey bees prefer diets that reflect the proper ratio of nutrients necessary for optimal survival and homeostasis. This idea relies on the precept that honey bees evaluate the nutritional composition of the foods provided to them. While this has been shown in bumble bees, the data for honey bees are mixed. Further, there is controversy as to whether foragers can evaluated the nutritional value of pollens, especially if they do not consume it. Corby-Harris et al. (2018) focused on nurse workers, who eat most of the pollen coming into the hive. They tested the hypothesis that nurses prefer diets with higher nutritional value. They first determined the nutritional profile, number of plant taxa (richness), and degree of hypopharyngeal gland growth conferred by three honey bee collected pollens. They then presented nurses with these same three pollens in paired choice assays and measured consumption.  To further test whether nutrition influenced preference, they also presented bees with natural pollens supplemented with protein or lipids and liquid diets with protein and lipid ratios equal to the natural pollens. Different pollens conferred different degrees of hypopharyngeal gland growth, but despite these differences, nurse bees did not always prefer the most nutritious pollens. Adding protein and/or lipids to less desirable pollens minimally increased pollen attractiveness, and nurses did not exhibit a strong preference for any of the three liquid diets. They concluded that different pollens provide different nutritional benefits, but that nurses either cannot or do not assess pollen nutritional value. This implies that the nurses may not be able to communicate information about pollen quality to the foragers, who regulate the pollens coming into the hive. Honey bee colonies have a yearly life cycle that might generate nutritional requirements that differ between times of brood rearing and colony expansion in the Spring and population contraction and preparation for overwintering in the Fall. To test this DeGrandi-Hoffman et al. (2018) analyzed polyfloral mixes of Spring and Fall pollens to determine if the nutrient composition differed with season.  Next, they fed both types of seasonal pollens to bees reared in Spring and Fall. They compared the development of brood food glands (i.e. hypopharyngeal glands-HPG), and the expression of genes in the fat body between bees fed pollen from the same (in-season) or different season (out-of-season) when they were reared. Because pathogen challenges often heighten the effects of nutritional stress, they infected a subset of bees with Nosema to determine if bees responded differently to the infection depending on the seasonal pollen they consumed.  They found that Spring and Fall pollens were similar in total protein and lipid concentrations, but spring pollens had higher concentrations of amino and fatty acids that support HPG growth and brood production. Bees responded differently when fed in vs. out of season pollen. The HPG of both uninfected and Nosema-infected Spring bees were larger when they were fed Spring (in-season) compared to Fall pollen. Spring bees differentially regulated more than 200 genes when fed in- vs. out-of-season pollen. When infected with Nosema, approximately 400 genes showed different infection-induced expression patterns in spring bees depending on pollen type. In contrast, HPG size in Fall bees was not affected by pollen type, though HPG were smaller in those infected with Nosema. Very few genes were differentially expressed with pollen type in uninfected (four genes) and infected fall bees (five genes).  Pollen type did not affect patterns of infection-induced expression in fall bees. Their data suggest that physiological responses to seasonal pollens differ between bees reared in the Spring and Fall with Spring bees being significantly more sensitive to pollen type especially when infected with Nosema. This study provides evidence that seasonal pollens may provide levels of nutrients that align with the activities of honey bees during their yearly colony cycle. The finding are important for the planning and establishment of forage plantings to sustain honey bees, and in the development of seasonal nutritional supplements fed to colonies when pollen is unavailable.

The age at which specific tasks are performed is extremely flexible, as bees are able to accelerate, delay or reverse their pattern of behavioral development (Robinson 1992). The transition to foraging is accompanied by changes in diet (Crailsheim et al. 1992), reduced lipid stores (Toth and Robinson 2005) and reduced blood proteins (Crailsheim 1986) including the lipoprotein vitellogenin (Fluri et al. 1982). The correlation between reduced internal stores and foraging has been observed.

Honey bees are highly social and the workers perform different behavioral tasks in the colony that cause them to be exposed to different local environments.  Jones et al. (2018) examined whether the gut microbial community composition of workers is associated with the behavioral task they perform, and therefore also the local environment they are exposed to. They set up five observation hives, in which all workers were matched in age and observed the behavior of marked bees in each colony over four days.  The gut bacterial communities of bees seen performing predominantly foraging or predominantly in nest tasks were then characterized and compared based on amplicon sequencing of the 16S rRNA gene. Their results show that some core members of the unique honey bee gut bacterial community are represented in different relative abundances in bees performing different behavioral tasks. The differentially represented bacterial taxa include some thought to be important in carbohydrate metabolism and transport, and also linked to bee health. The results suggest an influence of task-related local environment exposure and diet on the gut microbial community and identify focal core taxa for further functional analyses.