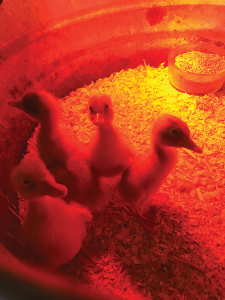 Usually around this time of year, I have an article or two that centers around new birds. I’ve had a lot on the turkeys in the past year or so, but this Spring, we branched out a bit on a whim. I have a friend, Taylor, who does photography and had a bunch of Spring sessions with kids. She wanted to use some chicks and ducklings in her photos for an added Spring touch but didn’t want to keep them and she knew I was a sucker for more birds. The problem here was that Taylor had never raised birds before and didn’t think about things like food, water, or that it was 60 outside and that was super warm for us in March, but was about 40 degrees colder than those babies would need. We ended up picking them up a few hours early because they weren’t doing so hot and had Charlie with us carrying a washtub full of birds through a public park, much to the amusement (and mild confusion) of everybody else. We learned from this experience that the ducks were much hardier than chicks. Thus began the duckling frenzy at the house, but we were sorely unprepared for the madness that ensued.

Those two ducklings, who were originally named Queso and Quackers (I think the names have changed a few times now after the introduction to the kids), were the impetus for more chicks. Unfortunately, we hadn’t had them long enough to understand the ins and outs of duck raising, but it was an opportune time because we had chicken and guinea eggs hatching in the incubator at the time. It was only later that we realized what a bad idea it was to have ducks with other birds and just how gross they could be. They are super cute, but so gross.

Queso and Quackers came in with four other chicks, and then we had the other birds hatching along. The ducks grew at what was probably more than twice the rate of the chickens and the bigger they were, the more of a mess they made with the water. To be able to eat, ducks also need water. With a duck bill, most of the water goes out the back and ends up everywhere but in their face. The brooder gets soaked daily, and they cry without their water if you try to take it away. They also need to be able to get their entire bill into it to keep their nostrils clean so a shallow waterer doesn’t work well. This massive amount of water where the brooder turns into a swamp is not particularly ideal living conditions for other birds. The other birds had to be taken out pretty quickly because the ducks dwarfed them and would accidentally step on them or shove them around. Once they were moved into the new brooder, six new ducks somehow made it home with us from buying chicken food and joined them. Then, we had an order that I “accidentally” purchased with four runner ducks. They were by far my favorite but appeared to have some sort of disease and after a couple days, only one was still alive. We put a stuffed animal in with her and she seems to think it’s her friend. She gets carried around a lot more than our normal birds because she’s alone, so I suspect she will be much more people-oriented as a full-grown duck. 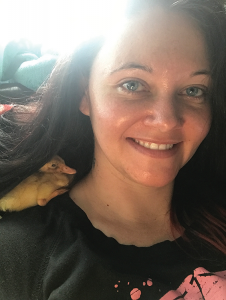 Baby ducks are adorable. They waddle around on their cute little webby feet and look at you sideways with their buggy eyes and run up to the edge of the tub and chirp at you to pick them up. They want to snuggle up to your face or crawl through your hair and nest in it like a tunnel. They chatter at your jawline and will nibble on your hair, and then fall over because webbed feet don’t climb well. They are some of the most personable babies we’ve ever raised, especially when you compare them to guinea keets. The guineas are absolutely terrified of everything by day two and never seem to bond well. At best, they vaguely tolerate handling. The ducks, on the other hand, like to be held and crawl around. After they get a little older and can produce their own oil to keep them dry, you can also put them in the bathtub or other water to swim around. They love going in the water and it is one of the most precious things ever to see. It’s a good thing they’re so cute though or nobody would raise ducks.

If you go in to your local farm supply store, you might be tempted to buy a duck or six. After some of our issues, I’m thinking some advice might go a long way for you to learn from my mistakes. The first thing is to go ahead and set up one of the 100 gallon stainless steel stock tanks and line it with plastic (like a trash bag cut in half). Once you get the bedding in, either hang the waterer and put a pan under it, or put the waterer on a larger bowl or dish that has a screen over it. This will catch a lot of the excess water and keep it from getting all over the bedding. You might as well start with a gallon waterer and go from there, because anything less will have to be filled up several times a day. If the water totally soaks the bedding, it’s not a smell that you would want to become acquainted with, and it will take a shovel to get everything out of the tank. The heat lamp will help dry out some of the wetness, but the ducks get hot a lot easier than other birds and will start panting if you leave the light on.

Although in general it’s recommended to have their food and water close together, you don’t want it to be too close or they’ll ruin the food. They will love mealworms, and it’s really fun to throw them in the tub when they swim and watch them chase after the floaters, so go ahead and buy a couple bags of those. Eventually, they’ll eat greens but it might not be for a few weeks. 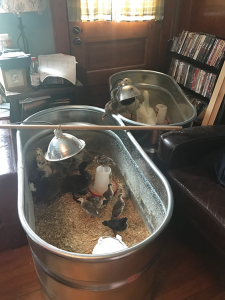 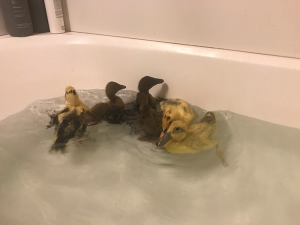 I’d also suggest not buying ducks until the last minute, or ordering them online, so that when they get to be too big or too stinky for your house, you can go ahead and put them outside without worrying about the temperature. They can acclimate to ambient temperature a lot faster than chicks and are ready to go outside a pretty good bit before the other birds. That being said, our second batch of ducks is still with the guineas and chicks, and they all seem to get along fine. The guinea keets are super tiny still, but they are pretty aggressive and can hold their own against the bigger birds. I’m not sure if there’s any aggression in the ducks, but I haven’t seen any issues so far. I also can’t tell the difference in males and females, but supposedly the females are loud and quack and the males hiss and have a curly butt feather. Some breeds have differences in appearance, but if you order from a hatchery, they’ll mark the ducks with a band on their legs so you know which is which. 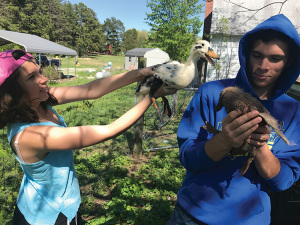 Maggie, Henry and the duck babies.

Once they are ready to go outside, they need a pen and some sort of highly ventilated coop. They can’t roost like chickens, but they need a safe place because most domestic ducks don’t fly well and are sitting ducks (ha!) for predators like your neighbor’s dog. They do like a lot of humidity and would love to have a small swimming pool or pond if you have it. Otherwise, they don’t absolutely need water to play in, but they definitely prefer it. Ours will have one of those blue plastic kiddie pools once it’s a little warmer. They were getting daily baths in the tub. Now that they’re outside, they’re not coming back in the house – so they’ll just have to wait.

Overall, I’d probably get ducks again given the chance. They have a great personality and are very photogenic. They are decent egg layers and are a good addition to the pest control around the house. I would change the timing of our purchases in the future to accommodate the outdoor transition faster as my biggest concern. If you feel like you’re up to the challenge, more power to you and I hope you have great success. I think it’s always great to pursue a new challenge on the homestead, at least as a learning experience if nothing else. The ducks are unlike any other bird I’ve ever raised. I think some of it is being a water bird, and some of it is just that they are strange. If I get the option in the future, I will absolutely let a mama duck raise babies instead of hand raising!