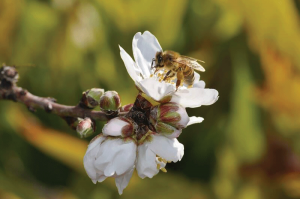 The triumph of modern agriculture is the enormous increase in productivity of land when growing edible crops to feed a huge and increasing number of people on the planet. This increase in productivity has been brought about by scientific and technological progress in our understanding of the ways that plants grow, by the development and application of fertilisers, by plant breeding, by the control of pests and diseases, and by improvements in irrigation. Increased use of land to grow edible and other useful plants has, however, made it much more difficult to satisfy one critical requirement that of pollination, the transfer of pollen between flowering plants of the same species. The majority of flowering plants rely on either insects or animals for pollination, unlike the wind pollination utilized by corn, wheat, rice, and sorghum.

The main pollinators are bees, of which there are about 25,000 species world-wide. One of these species, the European Honey Bee, Apis mellifera, dominates crop pollination world-wide, although native bee species also play their part. Other insects that provide much of the remaining pollination include moths, flies, wasps, beetles and butterflies.

We are dependent on bees, as well as on many other pollinators, not just for many of the fruits and vegetables we enjoy eating each day or the strawberry ice cream at the supermarket, but for our very survival on this planet. 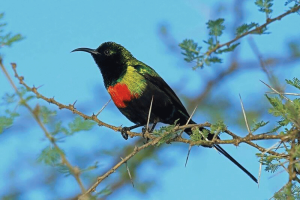 The beautiful Sun Bird, which feeds mainly on nectar, is a native of Tanzania in Africa. Fortunately, this species of Sun Bird is not regarded as endangered. (photo by Nigel Voaden).

The contribution of insects is largely overlooked in today’s agri-business world. According to the FAO, World honey production in 2007 was worth around $1.25 billion USD, but the value of insect pollinated agriculture, which includes honey bees, is worth significantly more. Figures vary widely, reflecting the difficulty of estimating the value of pollination, although a 1997 study valued all global pollinator ecosystem services at $120 billion USD, while a later 1999 study valued benefits to agriculture alone at $200 billion USD.

It is not only edible plants that are at risk. Crops such as cotton and hemp that are used to produce natural fibres, as well as many species of trees, that do not need to be in flower when they are harvested, still need animal pollinators to produce further generations. Even for meat and dairy production, the reliance of bee provided pollination of clover and alfalfa is critical.

Bees, both European honey bees and native bees, play an important role in ensuring a healthy and diverse ecosystem. But this works both ways, a healthy and diverse ecosystem is essential if bees are to survive and flourish around the world. Flowering plants and bees have co-evolved over the past 110 million years and both depend on each other for survival. A reduction or loss of one will compromise or make difficult the survival of the other.

Like humans, bees require a diverse food supply in order to obtain the range of minerals, proteins, sugars, fats and vitamins they need to survive. If we are to ensure our own long term survival, we cannot focus only on keeping individual species of plants or animals alive, we must look at what is best for entire ecosystems and to ensure that ecosystem health overall is optimised. 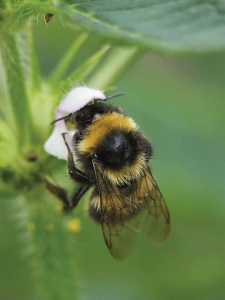 The long-tongued bumblebee, Bombus hortorum,
distributed across much of Europe, is a common
pollinator of plants. (photo by Rasbak)

While the role that bees play in the food supply may be apparent to many it is noteworthy that this is only one of the ecosystem services they provide. The flowering plants that bees pollinate deliver many other critical services to the ecosystem. Included among these are carbon sequestration, prevention of soil erosion, nitrogen fixation, maintenance of the water table, and greenhouse gas absorption. All pollinators, not just bees, require resources for nesting, feeding and reproduction in the form of vegetation, prey, suitable habitat conditions, as well as the implementation of pollinator-friendly land- and water-use practices if they are to survive.

Butterflies, due to their visibility and pleasing appearance have long received the attention of both the scientific and lay communities, and as a result they have been the focus of the majority of long-term monitoring efforts in the U.S. that have documented significant reductions in population numbers. In one California study, a 29 year census of butterfly species showed a nearly 40% decline in species diversity. Moths, which are nocturnal and drab, outnumber butterflies by a substantial margin, but because butterflies are more visible and attractive, they are included on the endangered species list much more frequently than their less colourful relatives. In the U.S., moths are important pollinators of a variety of plants. As an example, the hawk moth is the principal pollinator of many plants in the S.W. United States including night-flowering cacti, desert lilies, evening primrose and wild tobacco.

In Britain, more than two-thirds of the nation’s larger moth species have declined over the last four decades. Apart from their contribution to pollination without moths birds would go hungry.

Similarly in Europe, many studies show serious decline in species richness and distribution of many species of moth.

In Australia there is so little information on most species of moth, as with other pollinators, that it is difficult to distinguish between species decline, migration, normal short-term movements and simple lack of information

In the U.S., many pollinators such as digger bees, squash bees, mason bees, and shaggy fuzzy foot bees may also be in decline, but there is insufficient data to clearly show this. Alkali bees can pollinate onions, mint, and celery; carpenter bees pollinate canola and pepper; leafcutter bees contribute to pollinating the alfalfa that provides forage for dairy and beef cattle; Mason bees can pollinate apples and blueberries; squash bees can pollinate pumpkin; and shaggy fuzzy foot bees can pollinate apples and blueberries. Their contribution to native plant communities is likely to be indispensable, but for most species, including those native to Australia, no evidence of population decline exists because their abundance has never been measured over time. 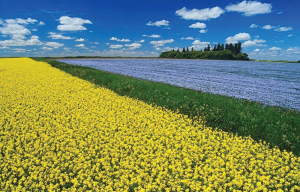 Monocultures, although important in large scale agriculture, provide little if any other food resources for insect pollinators outside of the main flowering season. (photo by Dave Reede)

Among native bees, bumblebees are exceptional in that there are indications of significant declines. The long-tongued bumblebee, Bombus hortorum, found in most of Europe north to 70ºN, as well as parts of Asia, New Zealand and some of the southern states in the U.S., pollinates a diverse range of wild plants as well as such crops as water melon, cucumber, berries, and sunflowers. Bumblebees are also used to pollinate tomatoes inside greenhouses, which other species of bees are unable to do.

The number of worker bumble bees inside a colony is relatively small (50 to 100), and although they are effective and efficient pollinators, they are unable to compete as pollinators with a hive of European bees that can contain 50,000 worker bees.

Global climate change also presents a challenge to the bumble bee and there are some indications that the bumble bee species adapted to living in cooler climates are in decline, while warmer adapted species are extending their range.

Flies are especially important pollinators in alpine regions. Fly pollination is also important in agriculture and some species of Forcipomiyia are the main pollinators of cacao, the source of chocolate. Flies also contribute to the pollination of several minor crops including onions. There have been insufficient studies conducted to quantify the decline in the number of flower visiting flies, but there are clear indications of their decline.

As well as bees and other similar sized insects, vertebrae pollinators are also important and include bats, non-flying mammals (including several species of monkey, rodents, lemur, and tree squirrels), and birds (including hummingbirds, sunbirds, honeycreepers, and some parrot species). Bats are important pollinators in tropical and desert climates, including the S.W. United States, Mexico, Africa, Southeast Asia and the Pacific islands. Although not all species of bats are pollinators, declines in bat populations have been so dramatic that of the 59 U.S. species listed on the U.S. Fish & Wildlife Service Endangered Species data base, 14 are listed as endangered, one is being proposed as endangered, two are listed as threatened, while a further 14 are being reviewed for endangered listing. Over 300 species of fruit depend on bats for pollination, including mangoes, bananas and guavas. The Agave plant and the Saguaro, state cactus of Arizona, also depend on bats for pollination. The agave is an important plant because it is used to make tequila. 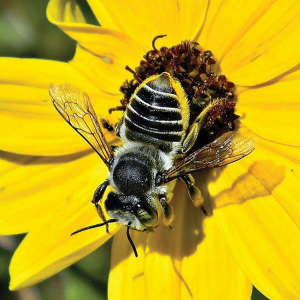 It is now recognised that agricultural production, agro-ecosystem diversity, and biodiversity are threatened by declining populations of pollinators. Many pollinator population densities are being reduced below levels at which they can sustain pollination services in agro-ecosystems, natural ecosystems, and for the maintenance of wild plant reproductive capacity. In Asia, studies show a linkage between declining native insect populations and decreasing crop yields. As a result, many farmers in the developing world and elsewhere are bringing in the European honey bee to provide pollination services to pollinate apples and other crops.

Threats to pollinators and the services they provide are perceived to be increasing throughout the world and are largely man made in origin. The main causes of pollinator loss are:

The use of pesticides for pest control and the role of bees in pollination are essential ingredients of modern agriculture. Without either of these two, global food production would seriously decline. Unfortunately, these two practices are not always compatible, as honey bees and other pollinators are susceptible, even at very low levels, to many commonly used pesticides. The indiscriminate use of pesticides, by inadvertently killing or impairing the foraging ability of natural and managed bees, has resulted in a reduction in crop yield, which is the opposite of what crop protection seeks to achieve. In the U.S. last year, a staggering 42% of all managed honey bee colonies died, the second highest colony loss on record. Much of this loss was due to the mite varroa although pollinator-unfriendly human activities have also contributed to their decline. This level of honey bee loss is unsustainable.

A number of conservation studies have concluded that clearing land of trees and increased cultivation have eliminated many of the nesting sites previously used by pollinators. Changing irrigation practices have also had long-term negative effects on soil nesting pollinators. Overgrazing of range land and the use of herbicides have reduced the presence of pollinators by decreasing diversity of pollen-nectar resources and by eliminating plant resources used by various pollinators for nest construction. Thus, one of the unfortunate side effects of increased food production has been a decrease in the number and variety of pollinators on which agriculture depends.  This situation must be addressed as healthy and diverse ecosystems are essential if we are to feed the 7.3 billion people who today live on this planet.

Klein A, Vaissière BE, Cane JH, Steffan-Dewenter I, Cunningham SA, et al. (2007) Importance of pollinators in changing landscapes for world crops. Proceedings of the Royal Society B: Biological Sciences 274: 303–313.

vanEngeldorp, Dennis, Meixner, Marina Doris. (2010). A historical review of managed honey bee populations in Europe and the United States and the factors that may affect them. Journal of Invertebrate Pathology, 103 (2010) S80–S95.