Q: A beekeeper in Pennsylvania writes:

Could you explain this to me? In late March we were having above normal temperatures, and beneath my screen bottom board I found two larvae in the debris tray. A few days later I saw a bee fly out from a hive with a larvae that was wiggling until the bee stung it, then it quit. It was about ¾” long.

Can hive beetle, or wax moths rear larvae during the Winter?

A: The ability of either pest to reproduce during the Winter depends on what part of the country you live in. I would not expect to see larvae from either wax moths or small hive beetles (SHB) in Pennsylvania hives in mid-Winter, or in any other area which experiences cold Winters. However, by March you are probably seeing early signs of Spring, and it’s possible for one or the other to be starting a new reproductive cycle, especially the SHB.

Small hive beetles survive in the hive throughout the Winter, inside cells within the honey bee cluster, by taking advantage of the cluster’s warmth. Adults are difficult for honey bees to remove, thus their continual presence even in strong, healthy hives. Their ability to rear larvae, on the other hand, depends on the availability of food – especially pollen. Some beekeepers like to place pollen patties in their hives early in the year to give their colonies a head start on rearing brood to take advantage of Spring nectar flows. They might, as an unintended consequence, also be fostering SHB brood. I advise beekeepers to use the patties if they wish, but to be observant and remove them if they begin noticing SHB larvae appearing in the hive. In your case, the warm weather you experienced in March undoubtedly resulted in some flowering and early, natural pollen collection by the bees. That could have stimulated the production of the larvae you saw if, in fact, they were SHB. I don’t think, though, that conditions in mid-March are likely lead to the kind of rapid growth of small hive beetles which could become a serious problem. The location in which you found them – under the screen bottom board – is common. This is a favorite place for larvae to hide out, since honey bees cannot get at them to remove them.

Wax moth larvae are often found in the same location, and for the same reason. However, it’s unlikely that the ones you saw were that kind. Unlike small hive beetles, wax moths do not live inside honey beehives year round. They are more of a warm weather invader, sneaking in at night to laying their eggs. I would think that March in Pennsylvania is a bit early for wax moths to be active, and that what you observed were SHB larvae. There are distinct differences between the two. The ¾” length you describe corresponds better to wax moth larvae, whereas those of SHB are closer to ½”, but it isn’t easy to tell them apart unless you can compare them side by side. I am not sure which type of larvae you saw, but it doesn’t really matter. Both are capable of stealth reproduction: laying eggs a few at a time in out of the way places, like under screen bottom boards, where they often escape a beekeeper’s notice. Both can become serious pests in weak hives, destroying comb and overwhelming a small population of bees. Strong colonies, as you have seen yourself, can handle the problem on their own – not eliminating the infestation, but managing it.

Q: A beekeeper in Michigan writes:

Is there an advantage to starting swarms on drawn comb versus foundation? I have caught a couple of swarms this year, and did have some extra drawn comb, but I have used it all. If I catch any additional swarms they will have to go on new foundation. Will these swarms be at a disadvantage because I do not have any drawn comb to give them?

A: It is true that drawn comb would make empty cells immediately available for nectar and pollen storage and for 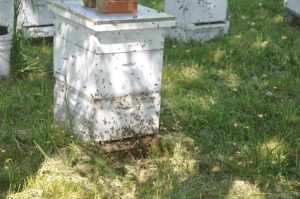 the queen to deposit her eggs in. That might speed up the captured swarm’s development by a few days. On the other hand, swarms, especially large ones, are self-selected for their wax making capabilities. In nature, unmanaged swarms must rapidly build enough comb for their immediate reproductive and food storage needs, then continue production until they have storage space for sufficient honey and pollen to get them through their first winter. To that end, swarms contain a high percentage of young bees less than 10 days old – which is the optimum age for producing wax. They are also helped by the fact that swarming occurs during periods of strong nectar flow. Honey bees are stimulated to build comb when they lack empty cells for raising brood and for storing nectar and pollen brought in by foragers. However, making new wax is a very energy intensive process. (See my May ’16 column on how much nectar it takes to produce a pound of beeswax.) A new swarm in a nectar flow has both the incentive of necessity and the resource of abundant food to make it a comb building machine.

In fact there are some advantages to letting a swarm colony draw out all fresh comb in its new hive. One is the convenience of the beekeeper. Throughout swarm season (April through June in the Midwest), I keep several unoccupied, one story hives in my apiary ready to house any swarms I might catch or to serve as bait hives for swarms from my own colonies. For this purpose, frames with foundation alone work best. If I stocked the hives with frames of drawn comb, I would have to monitor them frequently or risk losing it all to invading wax moths and small hive beetles. A more important consideration is the fact that old comb can harbor pathogens and chemicals which may be detrimental to the health of the colony. That is why we rotate old comb out of a hive every few years and replace it with new foundation. In short, the answer is no, you are not putting newly captured swarms at a disadvantage by installing them in hives with new foundation. Sometimes a fresh start is a good idea.

Yesterday following three days of bad weather one of my hives swarmed. It was real windy and they settled high in a cherry tree. This occurred around 1:00 and they were still there when it got dark.  It remained very windy over night and when I got up I noticed the branch had broken but they were still hanging on.  I kept watching for them to leave and saw lots of scouts flying around.  All of a sudden I noticed the original hive was covered with bees.  At first I thought maybe a secondary swarm but it looked more like bearding. The swarm appeared to be getting smaller and then was mostly gone. Eventually all the bees went inside as it was still fairly early. Have you ever heard of a swarm returning after being gone around 18 hours? I can think of no other explanation. Thanks as always for your help.

A: The most likely cause of a swarm’s going back into the hive is the failure of the queen to join it. Though the bees will probably replace her after a new colony is established, they must have a queen to begin with. Most non-beekeepers, and many new ones, assume that the queen leads the swarm on its journey to a new home, but that is not the case. Though she fulfills a singular and vital role in the life of the colony as the only female fully capable of reproduction (since she is the only one capable of mating) and as the emitter of unique pheromones (since she possesses glands that no other bee does), she is no ruler. On the contrary, she is subject to the demands of her subjects in all things honey bee. The term “queen” mistakenly evokes associations with human monarchs, but she does not wield absolute power and, with reference to swarms, is not even “leader of the pack”. Her role is more like that of the stereotypical politicians of some TV comedies. They are called “Governor” or “Mr. Mayor” and are the public face of power, but behind the scenes, aides formulate policy and filter information, handlers hustle them from appearance to appearance, and speechwriters put words in their mouths via teleprompters. In the swarm, the aides are scout bees: older foragers that locate a new colony site and lead the exodus. The handlers are the queen’s attendants, and she herself is voiceless.

However, I suspect you know all this; your question is about why the swarm waited eighteen hours before going back. The long delay is unusual. My first experience of a swarm returning to its hive was many years ago at a local beekeeping field day. The ideal setting for a successful field day is a sunny Spring or early Summer afternoon at the home of a beekeeper, with a beeyard full of strong, healthy hives for hands-on experience. These are also ideal conditions for swarming, and to have a swarm issue from a hive during a field day is not particularly uncommon. It occurred on that gorgeous day in May just as we were sitting down for a potluck meal – a highlight of get-togethers in the South where good country cooks abound. Since most of the beekeepers agreed with me about the importance of the mid-day meal and we all assumed that the swarm would sit tight for a while, we decided to postpone collecting it until after we had eaten. Sometime after the main course, but before we finished desert, it disappeared back into the hive. A quick return in the absence of a queen is not surprising. It doesn’t take a swarm, or a colony for that matter, very long to become aware that queen pheromones are dissipating and not being resupplied. That is why I suspect that, in your case, the return to the hive was due to the weather conditions you describe.

Though they typically leave the hive soon after queen cells are capped, swarms are known to postpone their departure during periods of rain or storms. Experienced beekeepers are particularly vigilant for them after a few days of inclement weather. With the swarm urge upon them and preparations made, your bees probably took advantage of the first opportunity, after three days of bad weather, to make their exit. They seem to have been a little too hasty. Aircraft are sometimes grounded when high winds make flying dangerous, so imagine the effect of a stiff breeze on tiny honey bees. It doesn’t take much to blow them off course, and you described wind strong enough to break tree branches. I suspect that, after a night like that, the bedraggled swarm reached a consensus that it was better to retreat to the safety of the mother hive.

One last comment. That decision, whether partly or entirely due to the weather, was a temporary one. They will leave again if they have not already done so. Once a colony is in swarm mode, it will eventually swarm. A queen who doesn’t cooperate on the first attempt, will be pushed and prodded into leaving on the second. If for some reason she cannot take flight – if she has a damaged wing or has had her wings clipped – the bees will just wait for a virgin queen to emerge and take her instead. As to the weather, in our part of the we say that if you don’t like it, just wait a couple of hours. So watch the trees.