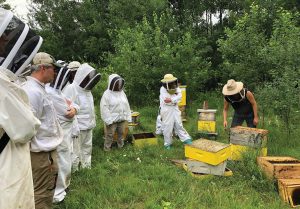 When I started to keep bees as a business rather than a hobby, I sat down and wrote a business plan and laid out my balance sheets. One thing was immediately obvious as I reviewed my plans – I could never be profitable if I kept buying bees. I had to provide for myself if I wanted my business to be sustiainable. My first step was to cut my demand and reduce my losses – I made my theme for that year “giving Varroa the respect that it deserves.”

I monitored like crazy, and kept those nasty parasites at bay. The second year, I focused on feeding, and redid my entire system so I could be more efficient, and be ready for when it rains during the entire goldenrod bloom. The final key was to take swarm season seriously, and not lose bees to the trees in the Spring. With season-long Varroa control, better Fall feeding, and young queens, my winter losses the last three years have been 10 – 15%, which fits well into my plans. Now, my losses have been to unlucky things like a late queen event, pygmy shrews, and my dumb decision to park a pallet under the downspout from a barn (it was high up, I didn’t see it when I moved bees in!).

As I reduced my demand, I also worked to increase my supply. I made a commitment to stop buying bees, but I still needed a source of replacements for the losses that I have. Also, I am not so arrogant to think that I have figured beekeeping out, and won’t have a bad year due to a family emergency, natural disaster, new disease, crazy shift in weather, etc.  In part two of this series I outlined all the ways that I have done this – I make nucs up in July and August to go through Winter. I also make a lot of splits in the spring for swarm control (which I just finished, which is why part III of the series is a month late!). Each year, I am making increases in May and in July.

Low losses and lots of nucs means one thing – excess bees. Right now I have bees coming out of my ears. For a while, the growth of my apiary looked like a Varroa population curve – getting out of control. I didn’t sell bees, because I was hoarding them all to myself. But, since I now have a job with a paycheck that I like very much, I don’t have the time for unlimited hives, and I had to find an outlet for my bees. By selling nucs in the spring, my operation is much more financially sustainable.  I can make money from my hives in the Spring, which covers my operating costs through the season. I also have income for that year, regardless of how the honey flow turns out.

Selling nucs in the Spring

There are a few ways that I have made nucs for sale in the Spring.

I just sell an over wintered nuc.  This is the easiest logistically – I make up spare five-frame nucs in the late Summer, and if I don’t need them in the Spring, I can just turn around and sell them. They have a young queen (from July or August the year before), and they really hit the ground running. These are worth the most because they grow the fastest, and they are available first. I can sell these before I split my other hives. However, they are often the hardest for me to sell, because they just look so good, and if I hang on to them, I could get another split from them later – fast nickels versus slow dimes! Demand for these are super high, and I can unload them in about two seconds by just talking to beekeepers or mentioning it at a club.

Splits from overwintered nucs. If I hang onto the nuc a little bit, and let it grow to having a few more frames of brood, I can make a split out of it.  I can sell the overwintered queen and a few frames of brood, and I can also have enough bees left over to drop another queen cell into and sell another nuc from it in a few weeks. If there are enough bees left, after the second nuc, I can drop a third queen cell in, and let the colony grow up enough to over Winter.

Using my overwintered hives to make nucs. There are a lot of ways to do this. I have taken big hives and broken them down into three to four splits, or I have just taken one or two nucs from each hive. If the queen is young, I can sell the overwintered queen, otherwise I can drop in a queen cell or a queen.

Because the demand for nucs is so high, I have never had to market them. I started selling just by word of mouth, or telling my club that I would have nucs for sale. I have posted them on local facebook clubs, and I have taken pre-orders. Generally, I feel comfortable taking as many orders for nucs as I have colonies going into Winter. If I have 70 hives going into Winter, I will take 70 orders. Some hives you won’t be able to pull a nuc from, but most others you can take two to three, so it tends to even out.

I have worked hard to make my apiary sustainable and to provide bees to my local area, and many other sideliners in my area are doing the same. However, we still can’t meet the demand for bees. Every hobby bee club in my state (and in other states that I visit for talks) organizes truckloads of packages and nucs to support new beekeepers and to make up losses. In order for us to be more sustainable beekeepers as a whole, we need to view the potential of the small beekeepers and the clubs. The final piece of the sustainable beekeeping puzzle for small scale beekeepers is to match the demand for local bees with the untapped supply of bees that are in the hives of club members.

How do we get from our super inefficient system to the sustainable dream world of local nucs? I don’t totally know. I’d really like to hear from people who have a good system in their area. What if instead of putting energy and effort into club package orders, dedicated volunteers (or a savvy beekeeper as a business) could tap the potential of the hives in the club. I strongly believe that if a beekeeping club decided not to import bees next year, they would still have enough bees. It would take more work, but it could still be a good source of income, and would be much better for the bees, the beekeepers, and the environment.

Have a volunteer take ‘commitments’ from members in the club. If you are going into Winter with four hives, and you don’t want to expand your apiary, you should be able to commit to at least two nucs to sell to the club. In the Fall, the club can get an estimate of the supply in the area. Treat this as a social pressure – it is up to the club to provide bees for the club. 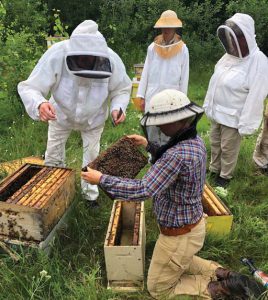 In this nuc clinic held by Kristy Allen of Beez Kneez (pictured),
participants fi rst learned how to make nucs, and went home
with a queen cell and a wooden nuc box, so they could immediately
apply what they learned. (photo by Alicia Donovan)

Set up a list of individuals willing to help with splits. A main obstacle for beginners wasting their bees is intimidation by the split process. This can volunteer, or this can be a hugely profitable endeavor. I did this one year, where I would help beekeepers with swarm control, by helping with splits. I was paid with excess nucs, or the extra splits. Lots of people just donated the excess bees, because they just wanted to keep the colonies they had from swarming. If a club had a list of people willing to help beginners, they could be much more efficient in taking advantage of all the excess bees that are wasted in hives that swarm. 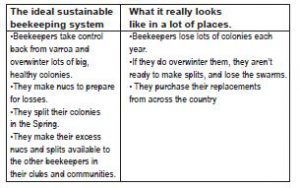 Coordinate a source for queens, using your estimates in step 1. Here is a situation where it would be fine to organize a bulk purchase of queens from another location (gasp!). Ideally, there would be a great source of local queens. However, in my area, early queens are a huge bottleneck. I can only start producing queens as soon as the bees are getting ready to split – and even then there is often terrible weather for mating. I need most of my first round of queens for my own splits, and I know it is the case for others in my area as well. If the club orders bulk queens for splits instead of bulk packages, that is enormously more sustainable, regardless of where they come from in the U.S. Making up splits with mated queens is less intimidating, and makes the bees ready for sale/distribution much earlier.

Distribute local queens for Fall requeening and making nucs, and help beekeepers make late summer nucs. Do a demo day, call on your volunteers, and put in an order for nuc boxes. Each beekeeper should be able to pull at least one nuc from each of their hives in late Summer to act as backup. They can get a local queen or queen cell for the nuc, and can sell it in the Spring if they don’t need it.

There is a huge role for clubs and educators (and bee businesses) to turn our local bee systems around.  It is great that there are so many people interested in bees and beekeeping and that membership is growing.  However, the system that we have made to support this growth is absurd. It is absolutely ridiculous that it has become normalized to take high losses, and to replace them from out of state. That is a horrible system, and we need to get away from it. We are too complacent about losses because packages are so cheap and available. We are contributing to a huge carbon footprint by demanding packages for hobby clubs all around the country. We are contributing to the spread of pests and disease across the country when we constantly import bees. First, take the time to evaluate your own operation, for when you will have excess bees, and how you can make them available to other beekeepers. Then consider ways that you can help others do the same. Volunteer to help others make splits. Order 10 queens, and make 10 nucs for sale.  Step up in your club to organize a nuc distribution, even if you don’t know how to make splits. Not only will the sale of nucs help your business or organization become more financially sustainable, but it will help us small scale beekeepers become more sustainable overall.