Glyphosate, the active ingredient in Monsanto’s herbicide Roundup, has been added to California’s Prop 65 list, meaning that glyphosate is “known to the state of California to cause cancer” and warning labels will be required from July next year. 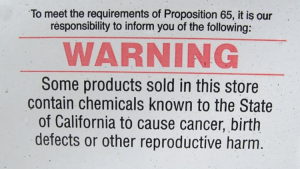 The delayed effective date is due to Monsanto ultimately unsuccessful challenge of the decision by California’s Office of Environmental Health Hazard Assessment (OEHHA).

Monsanto has now appealed, but no stay of the listing has been granted and the agency added glyphosate to the Proposition 65 list on July 7.

California’s action was based on a 2015 statement from the World Health Organization International Agency for Research on Cancer (IARC) that glyphosate was “probably” carcinogenic to humans.

The claim was instantly controversial and discredited with two other WHO groups, the Core Assessment Group and the International Program on Chemical Safety, saying glyphosate is not carcinogenic.

They were joined by the European Food Safety Authority, which said the evidence does not support classification of glyphosate as carcinogenic, and the UN Food and Agriculture Organization’s expert panel on pesticide residues in food, which glyphosate was unlikely to be genotoxic at anticipated dietary exposures.

Since 2001, Canadian, U.S. and Swedish researchers have published studies finding the greater the exposure to Roundup, the higher the rate of non-Hodgkin lymphoma.

Still, Monsanto argues glyphosate is not carcinogenic and the listing of glyphosate under Prop 65 is unwarranted on the basis of science and the law.

“California’s sole reason for listing glyphosate under Prop 65 is the fatally flawed classification by IARC, which ignored crucial scientific data that undermines its conclusion,” a Monsanto statement said last month.

“OEHHA’s decision to list glyphosate is contrary to its own scientific assessment, which determined that glyphosate is not carcinogenic, as well as the conclusions of the U.S. Environmental Protection Agency (EPA), the European Chemicals Agency, and every regulatory body in the world that has studied glyphosate.

“We will continue to aggressively challenge this improper decision.”

Despite Monsanto’s appeal, experts in the legal and food sectors are saying companies wanting to sell their products in California from next year, need to act as if the cause is lost and begin preparing their labelling accordingly.

OEHHA has made no final decision, but proposes 1.1 milligrams as a threshold for daily exposure.

It has said it is not expecting warnings will be required for packaged food products where trace levels of glyphosate residues may be detectible from crops sprayed with glyphosate.

Lawyers, though, say food companies need to find out how much glyphosate residue is in their raw materials. They can then calculate exposure based on the “reasonably anticipated use of the product by the average consumer.”

But history shows this may not be a defense.

When sued over alleged Prop 65 violations, many companies simply settle even though they are below the maximum level, because that’s cheaper than hiring a galaxy of high-priced defense lawyers.

Penalties for violating Prop 65 by failing to provide notices can be as high as $2,500 a violation a day.

With glyphosate and Roundup akin to a red flag for a raging bull for militant environmentalists, the listing under Prop 65 could see food producers throughout the country under legal attack soon after their products hit California store shelves.

This is backed up by a report by national law firm Perkins Coie’s Los Angeles-based partner David T. Biderman who says the number of Proposition 65 pre-suit notices and lawsuits against the food industry has skyrocketed since 2012.

“Food and beverage companies face an increasing risk that they will become the target of California’s Proposition 65 litigation,” he says. “Virtually any food company that conducts a business in California – restaurants, manufacturers, vendors, etc. – is at risk.

“In a single year, from 2012 to 2013, the number of filed Proposition 65 pre-suit notices nearly doubled, and we anticipate that this trend will continue,”

The data was based on the company’s review of Proposition Notices filed with the California Office of Attorney General.

“That data reflects the filing of 140 new class actions and nearly 250 Proposition 65 warning letters aimed at food and beverage companies, many of which identified multiple products and companies” the review said.

To warn consumers via shelf signs, the manufacturer must provide notice to each retail seller that the product may result in exposure to the chemical listed in the warning, and provide a sufficient supply of all necessary warning materials (signs/shelf tags) and instructions for placement.

For online purchases, the product display page should include the warning language or a clearly marked hyperlink with the word “WARNING” with a links to the Prop 65 language.

And beginning in August next year, the regulations will require Prop 65 warning language to be tailored to the specific chemical.

The most militant critics argue there is no need for glyphosate warning signs because the product should be outright banned. They say there is no safe level of exposure – glyphosate causes cancer and is not safe.

“By itself, that listing would be a big blow to Monsanto, because it would require cancer warning labels on containers of Roundup and on foods that have high residues of glyphosate,” it says.

The group says this marks the first time a governmental authority anywhere in the world has issued a regulation based on Roundup’s potential carcinogenicity.

“This is a significant blow to Monsanto, but a victory on behalf of the public, which could set the stage for similar actions in other states across the nation,” EWG president Ken Cook says.

But while applauding the action, EWG called for the state to go further and set much lower exposure limits to protect the health of children and fetuses.

On the other hand, the California League of Food Producers (CLFP) doesn’t believe the OEHHA can set a “no significant risk level” for glyphosate when at least nine international organizations say there is no risk.

The league complains Prop 65 has become a haven for attorneys to file shake-down lawsuits against food processors and other businesses.

The California Attorney General’s Office enforces Prop 65 along with any district attorney or city attorney for cities whose population exceeds 750,000.

In addition, any individual may file a lawsuit against a business alleged to be in violation of this law.

“CLFP supports reform of Prop. 65 through the use of sound science, appropriate risk management principles, and sensible and effective warning requirements,” the food producers group says.

Prop 65 dates back to 1986, when California voters approved an initiative to address growing concerns about exposure to toxic chemicals. This became the Safe Drinking Water and Toxic Enforcement Act of 1986, better known by its original name of Proposition 65.

It requires the state to publish a list of chemicals known to cause cancer or birth defects or other reproductive harm. The list, has to be updated at least once a year, has grown to include about 800 chemicals since it was first published in 1987.

The OEHHA, part of the California Environmental Protection Agency, administers the prop 65 program.

It evaluates all available scientific information on substances considered for the Prop 65 list.

That list contains a wide range of naturally occurring and synthetic chemicals known to cause cancer or birth defects or other reproductive harm. The chemicals include additives or ingredients in pesticides, common household products, food, drugs, dyes, or solvents.

Companies doing business in California are required to provide a “clear and reasonable” warning before knowingly exposing anyone to a listed chemical. This warning can be given by labeling a consumer product, posting signs at the workplace or publishing notices in a newspaper. Once a chemical is listed, businesses have 12 months to comply with warning requirements.

Businesses with less than 10 employees and government agencies (of course!) are exempt from Prop 65’s requirements.

Backers say Prop 65 has provided an incentive for manufacturers to remove listed chemicals from their products. They say trichloroethylene, which causes cancer, is no longer used in most correction fluids; reformulated paint strippers do not contain the carcinogen methylene chloride; and toluene, which causes birth defects or other reproductive harm, has been removed from many nail care products.

Enforcement action prompted manufacturers to lower the lead content in ceramic tableware and wineries to eliminate the use of lead-containing foil caps on wine bottles.

It is also credited with spurring significant reductions in California air emissions of listed chemicals, such as ethylene oxide, hexavalent chromium, and chloroform.