Woman released swarms of bees on deputies during protest to prevent the eviction of a 79-year-old Black homeowner: cops 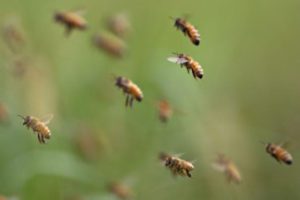 When sheriff’s deputies arrived to evict a 79-year-old man from his foreclosed Longmeadow, Massachusetts home, they were met by protestors — and a swarm of bees, according to a criminal complaint provided to Insider.

The Hampden County Sheriff’s Office has accused Rorie Susan Woods of Hadley, Massachusetts, of unleashing the swarm from multiple hives after they arrived to attempt to evict Alton King Jr., according to the complaint.

Woods, 55, was in an SUV pulling a trailer that contained at least four “large” bee hives and then “started shaking the bee hives in an effort to get the bees agitated,” the complaint read.

One deputy was stung in the face, and several others were forced to retreat to avoid the swarm.

When another deputy told Woods that he and other deputies were allergic to bees, police said that she responded, “oh you’re allergic, good,” according to the report.

Speaking to Insider, King identified himself as an elderly disabled man who lost his house due to a predatory home loan stemming from 2006 and what he considers unfair treatment in local courts.

He thought that the addition would increase the value, but an appraisal after the addition indicated his home lost value, he said.

Additionally, he believed that his mortgage on the construction loan would be $3,200 a month, but eventually, the cost of the loan escalated to over $13,000 a month, he said.

Defaulting on his mortgage in 2015, his case ended up in housing court. It’s been a fight ever since to stop his eviction, he said.

Two years ago, the Mass Alliance Against Predatory Lending — a coalition of housing nonprofits in the state — began a statewide effort to stop King’s eviction after the state’s highest court ruled that King can be made to pay a $4,000-a-month occupancy fee to the Bank of NY Mellon, while he appealed his eviction.

As of Thursday, 2,562 people have signed an online petition demanding that the Massachusetts Supreme Judicial Court review King’s case and stop his eviction.

Hampden County Sheriff Nick Cocchi said in a statement to CNN that Woods “put lives in danger as several of the staff on scene are allergic to bees.”

Inside also reached out to Cocchi.

“We had one staff member go the hospital and luckily, he was alright or she would be facing manslaughter charges,” Cocchi said. “I support people’s right to protest peacefully but when you cross the line and put my staff and the public in danger, I promise you will be arrested.”

We are here to share current happenings in the bee industry. Bee Culture gathers and shares articles published by outside sources. For more information about this specific article, please visit the original publish source: Swarms of Bees Released During Protest of Eviction of Black Homeowner (insider.com)