Most beekeepers are all too familiar with the sticky, resinous ‘bee glue,’ propolis, lining the inside of every honeybee hive. You can scrape and scrape all you want – the bees will just replace it! Every tiny gap or drafty crack in the hive will be sealed with propolis, which also coats the hive entrance, walls, and even the honeycomb. But in addition to making hive inspections stickier, propolis serves several crucial functions in the honeybee hive, and has been been recognized as valuable by humans throughout the ages. 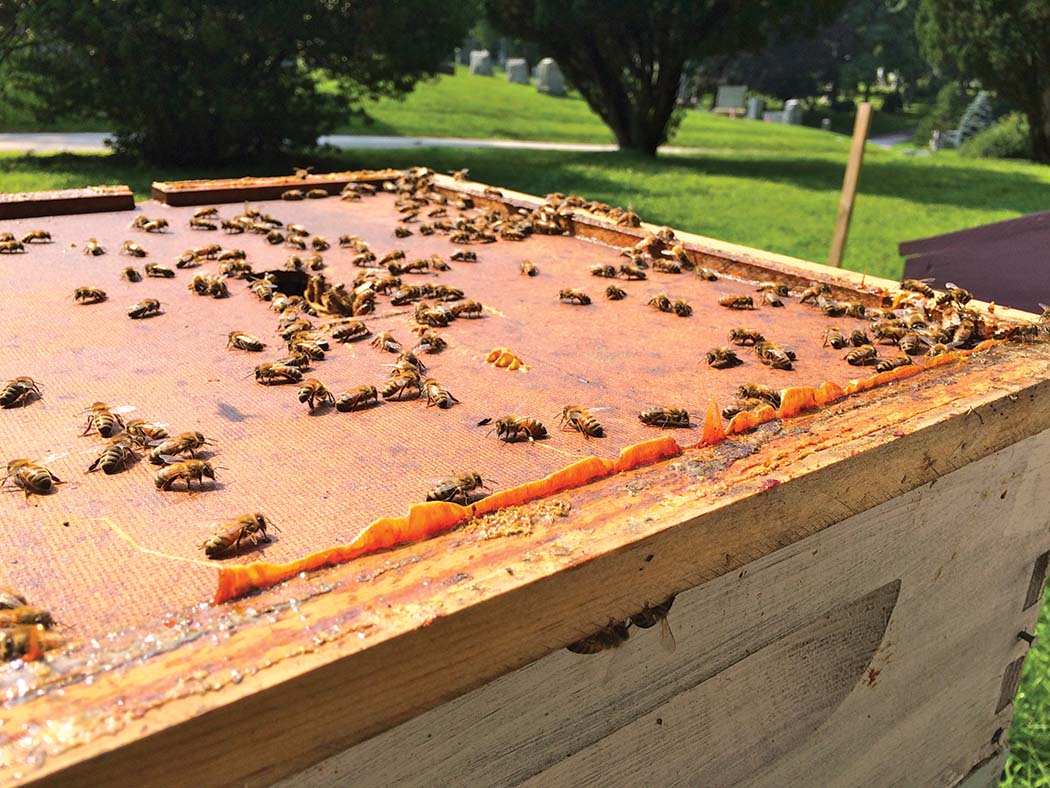 At once providing structural support and sterilizing action, propolis has been called both ‘bee glue’ and ‘bee penicillin.’ It is strongly anti-bacterial, inhibiting the growth of any bacteria, fungus, or other unwanted microbe that might thrive in the warm and humid hive environment. In fact, the word ‘propolis’ is derived from the Greek ‘pro’ (in front of, at the entrance to) and polis (community or city), meaning ‘before the city’ or ‘in defense of the city’ (ie, the hive). Bees also use propolis to contain potential pathogens brought in by mice and other hive intruders. These intruders will be killed by the bees, and their carcasses mummified in propolis to prevent their decay from degrading the hive environment.

The bees make propolis from tree resins that they collect from leaf buds and tree sap. Worker bees collect the resins and carry them back to the hive on their legs in their pollen baskets. Perhaps because the resin is so sticky, the worker bees cannot unload it themselves (unlike pollen), rather, they have to have another bee unload their bounty for them. The bees mix the collected resins with wax, honey, and enzymes from their stomachs to turn it into the amazing and ever-useful substance that we know as propolis. The end composition is ~50% resins, 30% waxes, 10% essential oils, 5% pollen and 5% plant debris, although each hive’s propolis is a bit different, based on the variety of unique resins collected from a given hive’s local trees.

How is propolis harvested by the beekeeper?

To harvest propolis, the beekeeper places a flexible plastic screen with cracks on top of the frames in the hive, underneath the hive cover. The fastidious bees will quickly work to seal all of the cracks with propolis. This plastic screen can be easily removed by the beekeeper and placed temporarily in the refrigerator or freezer – the propolis, which is soft and sticky in the warm hive, will quickly become brittle in the cold. Flexing the screen easily cracks the brittle resin off of the screen where it can be collected.

How has propolis been used by people – past and present?

Propolis has been used for health and healing since ancient times – at least since the time of Aristotle (384 – 322 BC), who is actually said to have coined the word ‘propolis’ himself! Taking advantage of its antiseptic qualities, Ancient Egyptians used propolis to embalm cadavers. In ancient Greece, Aristotle (384 – 322 BC), the physician Pedanius Dioscorides (40 – 90 AD) and Galen (129 – 217 AD) prominent Greek physician).

In ancient Rome, the naturalist and author Pliny the Elder (23 – 79 AD) used propolis extensively. In his famous Natural History, he wrote that “propolis is produced from the sweet gum of the vine or the poplar, and is of a denser consistency, the juices of flowers being added to it. Still, however, it cannot be properly termed wax, but rather the foundation of the honey-combs; by means of it all inlets are stopped up, which might, otherwise, serve for the admission of cold or other injurious influences.”(1) Pliny also wrote that propolis “has the property of extracting stings and all foreign bodies from the flesh, dispersing tumours, ripening indurations, allaying pains of the sinews, and cicatrizing ulcers of the most obstinate nature.”(2)

The ancient Jews also considered ‘tzori’ (the Hebrew word for propolis) to be medicine, and tzori is mentioned throughout the Old Testament.(3)

In more recent times there has been a significant amount of research on the biological activity of propolis, and many of the healing properties that so many civilizations have touted in propolis throughout the ages have been confirmed by modern day science. Research has demonstrated its anti-bacterial, anti-fungal, anti-viral, and anti-inflammatory properties, its ability to protect the liver, to increase the body’s natural resistance to viruses and infections, to heal problems of the mouth and gums, and to treat peptic ulcers (among other attributes). At least 180 different compounds have been identified so far.

Today, propolis is used as a popular remedy. Current sales of propolis in the United States are estimated at 40,000 lb/yr. Because of its long and varied list of touted benefits, the range of uses is long and varied in home remedies and body care products. It is available in capsules, as an extract in alcohol or glycerin, as a mouthwash, and can be found in many creams and cosmetics.

You can make your own products from raw propolis very easily! You can collect propolis using a propolis trap as described above, or you can scrape small amounts from the edges and sides of your hive components.

Raw propolis can be easily infused into a topical cream or oil, a liquid (propolis extract), and can be purchased at your local natural foods store in capsule form as well. Together these products are an amazing defense system at your service, with an ability to assist your body with healing and germ fighting.

Of all methods of infusion, research indicates that an oil extract of propolis may have the strongest anti-microbial effect. Applied topically, propolis oil is soothing and healing on cuts and abrasions. Propolis infused oil can be used as an ingredient in lotions or salves, and can work wonders on areas of skin irritation or severe dryness such as psoriasis or eczema.

Mix the propolis and oil together in the top of a double boiler. Use a thermometer to monitor the temperature and heat the oil to no higher than 122°F (as higher temperatures may destroy some of the beneficial qualities contained in the propolis). Stir and heat for at least 30 minutes, and up to four hours. The propolis will not all dissolve.

Strain this mixture through cheesecloth or a paper coffee filter. If you use cheesecloth, you may have to filter the oil twice. The propolis that remains in the filter can be used again to make more oil – refrigerate or freeze it for another time. Store your finished oil in a sealed jar in a dark place.
Keep in an amber dropper bottle, and store in your medicine or kitchen cabinet.

Mix two parts propolis by weight to nine parts of clear grain alcohol, by weight (we use 75 proof or higher vodka, or Everclear) (Do not use ethanol alcohol – it is poisonous!).

Mix together in a lidded container, such as a canning jar.  Shake.  Store in a dark place. Shake two to three times a day for one to two weeks. Strain through a cheesecloth or paper coffee filter, and store in a dark place or in a dark jar. You can collect and store the propolis left in in the filter, as it may be reused for another tincture or oil (store in the fridge or freezer).

Keep in an amber dropper bottle, and store in your medicine or kitchen cabinet.

Use this as a rinse after brushing at night, and keep the dentist away!

(Note that the essential oils and calendula, echinacea and myrrh tinctures can be found in a natural food store.)

Spray in the back of the mouth anytime sore throat hits! This powerful spray can be great to prevent bacterial throat infections such as strep throat.

– Mix three TBS of propolis tincture (see recipe above) with two TBS of raw local honey and one TBS of warm water in a spray bottle. The propolis tincture can be combined with other herbal tinctures as well for their immediate relief and longer-lasting benefits in the face of illness; our favorites are echinacea, marshmallow, ginger and/or elderberry tinctures, all of which can be found in a natural food store.