You may ask, why rent or buy a professional quality infrared camera? Can’t I see everything I need to know with an inexpensive entry level camera? Isn’t that good enough?

It all depends on your application. In your kitchen or at a Farmer’s Market, you’ve probably used a mechanical spring scale, accurate to + 0.25 oz. (28.3 gm). A digital grocery store scale is more likely to be accurate to 1/100th oz. or better, and it should also have an up-to-date calibration certificate. If you are buying cut oats at 89¢ per pound (454 gm), spring scale error may insignificant – less than a penny a pound. You might be a bit more particular about an eight to 12 oz. ribeye steak selling at $24.99 per pound. You’d be more concerned about scale accuracy if paying for caviar at $200 or more per oz. – or, how about saffron spice, which in my local store is $15.69 for 1 gm or 0.036 oz. jar?

If your primary purpose is to view a few hives in the backyard, the economic value of even an inexpensive IR camera is debatable, although curiosity, enjoyment, and ability to monitor colony status may more than justify the purchase. If you’ve dozens or more hives, an entry or mid-level IR camera for rapidly identifying suspect, weak and dead colonies can soon pay for itself in salary savings. If you are loading trucks to haul bees from Florida to California, I highly recommend using a higher grade, professional camera. The potential costs of making erroneous choices due to a marginal quality camera are far greater. 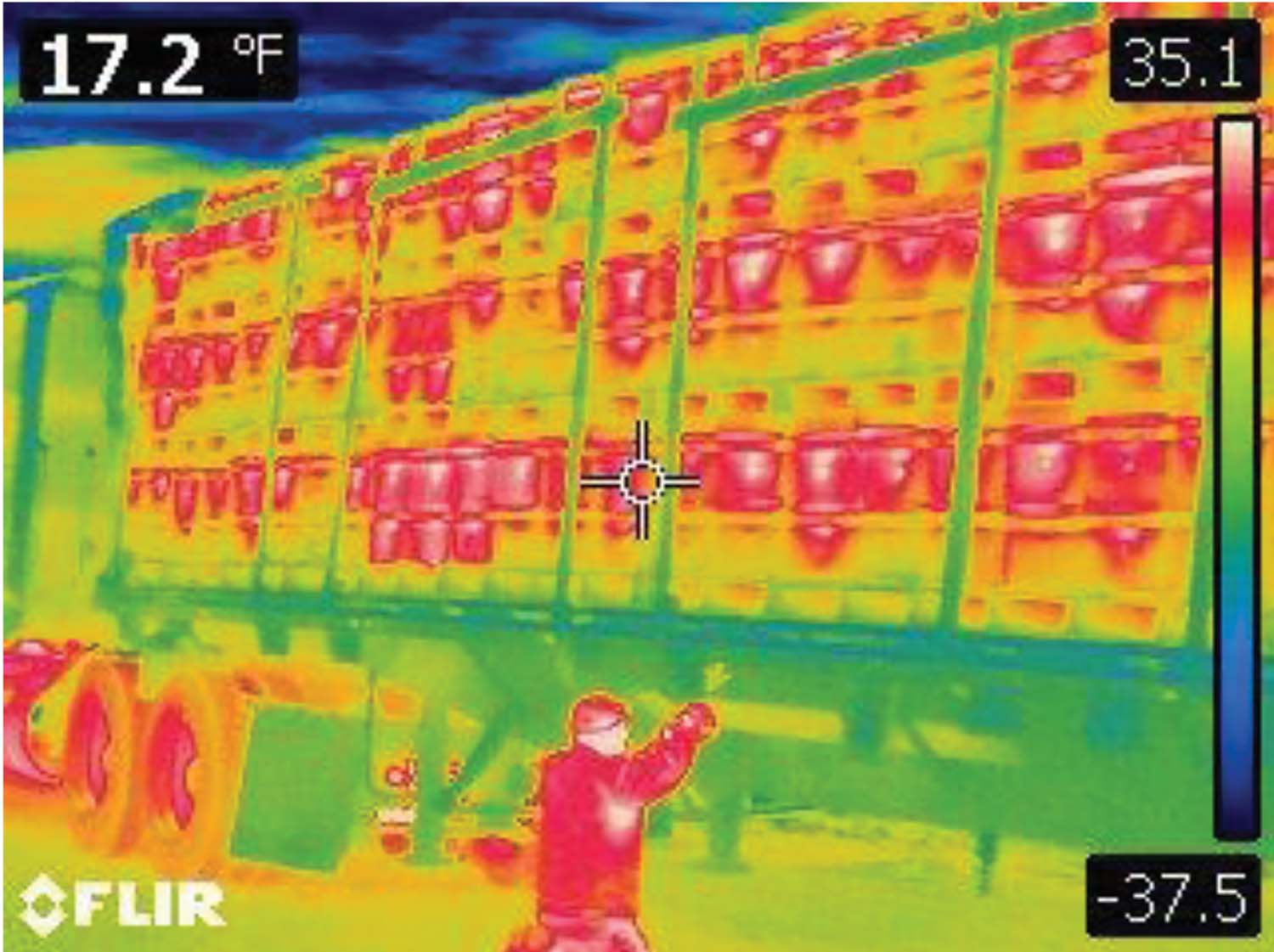 What’s the difference between an entry level and professional camera? I’ll use FLIR’s camera line to illustrate my points, and I’ll cover other brands in future articles. As mentioned in my previous articles, the ~$700 C2 is FLIR’s lowest price camera designed for daily use by trained building inspectors and contractors. Pros for the C2 include good value, light weight, pocket-size, and convenient touch screen controls. It is reasonably rugged, has four color palettes, and saves thermal pictures in true radiometric jpg format – with MSX detail enhancement. Images can be exported to FLIR Tools for analysis and editing and to generate written reports – a feature not supported by less expensive FLIR ONE cameras. Cons include low thermal resolution of only 4800 radiometric pixels (i.e., temperature data points), no video recording, no keyboard for entering data or written notes, and no voice recorder for note taking.

The E4 is the least expensive of the Ex series and in many ways, its features and capabilities overlap those of the C. The C2 is less expensive, lighter, and smaller than the E4. It has a handy, built-in LED flashlight, lacking in the E4, and it has video output, but only via micro USB cable, a cumbersome approach to saving video. The thermal resolution of both the E4 and C2 is limited to 4800 radiometric pixels. Both cameras produce and save thermal image files as true radiometric jpgs. Neither camera has movable temperature spot readings. The E4’s spot can be repositioned in the radiometric image by using FLIR Tools software. The spot can’t be moved on the camera itself.

For a beekeeper, choosing between the C2 and E4 is more or less a tossup; the C2 is smaller, very easy to use, and ~$300 less. The E4 is factory calibrated for accuracy. The deciding issue may be how much and for long the camera is likely to be used. The C2’s battery is charged by plugging in the camera itself, and the battery is not designed for ease of replacement. The battery for the E4 and all of the other E series cameras is in the handle of the camera. The battery can be charged by plugging in the camera, or the battery can readily be exchanged for a fresh one. The E4-E6 cameras use a battery similar to those found in the handles of rechargeable drills. The E40-60 uses a somewhat different style battery. For all E series cameras, the battery is swappable. I strongly recommend buying spare batteries and a charging system for any E series camera. FLIR lists four hours battery duration for the Ex and Exx series; five for the C2. I usually get no more than three to four hours per charge on any of these cameras.

The FLIR Ex Series of professional cameras includes the E4 (4800 radiometric pixels), E5 (10,800 pixels), E6 (19,200 pixels), (there’s no E7) and E8 (76,800 pixels) model cameras. All of these have a digital and an IR camera with MSX technology. The Ex series replaces the older i3, i5, and i7, which were thermal-only cameras. Similar in overall appearance to the higher end Exx cameras, the Ex cameras are more compact. All of the Ex series are fixed focus, point and shoot cameras, with a built-in, shutter-style, lens cap. The shutter protects the lens from dirt and scratches and can’t get lost – a very nice feature. The E6 and E8 offer discernible higher thermal IR resolution, picture in picture, and more importantly adjustable temperature levels and span ranges. 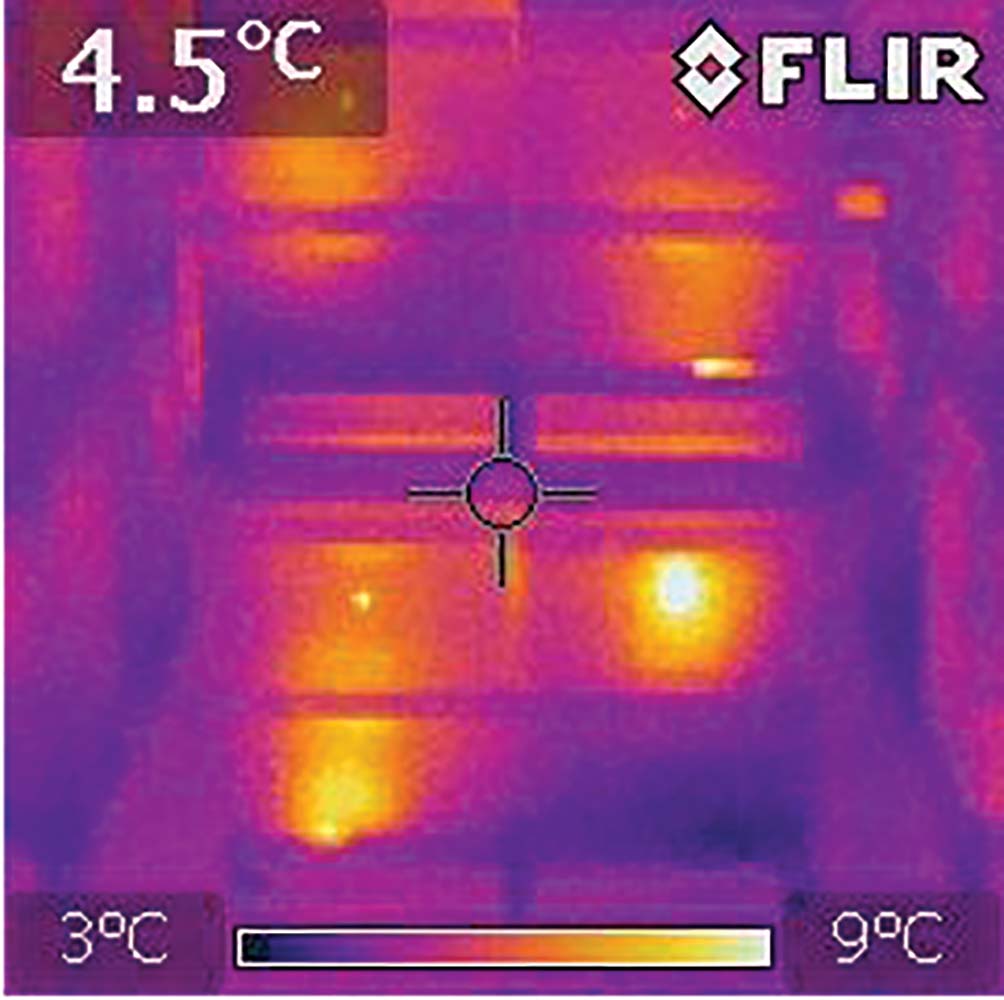 Ex cameras offer simplicity of use. They are somewhat bare-bones in terms of other camera features – there’s no touch screen, adjustable focus, Wi-Fi, Bluetooth, LED light, Laser Pointer, or voice/text annotation of pictures. Only the E6 has video output, yet lacks video recording capability. Both visible and IR images can be saved to an SD card. Data transfer is via a USB cable or can be read directly from the SD card.

If you need a simple, rugged, calibrated, professional level camera, the Ex series is the most affordable choice. Your main deciding factor, besides cost, should be the number of pixels in the detector, since it affects overall picture quality – both with respect of legibility and number of data points available for image viewing and analysis. The E4’s 4800 pixels produces noticeably blurry thermal images, as does the C2. Thermal definition and sensitivity is lowest in the E4, better in the E5, and best in the E6 and E8. Based on my trials, thermal image quality for Ex versus Exx camera models with matching numbers of pixels (e.g., the E6 and E40 have 19,200 radiometric pixels, the E8 and E60 have 76,800 pixels) are very visibly very similar, if not identical.

The FLIR E40 (19,200 radiometric pixels, E50 (43,200 pixels) and E60 (76,800 pixels) are my go-to cameras for research and commerce. Not only is the native thermal resolution and sensitivity sufficient for clearer imaging of hives, but there are many more functions and capabilities built into the cameras and available via the Mobile Apps and FLIR Tools that are bundled with the cameras. Also, FLIR has an optional, albeit pricey, research software package for advanced thermographic analysis. 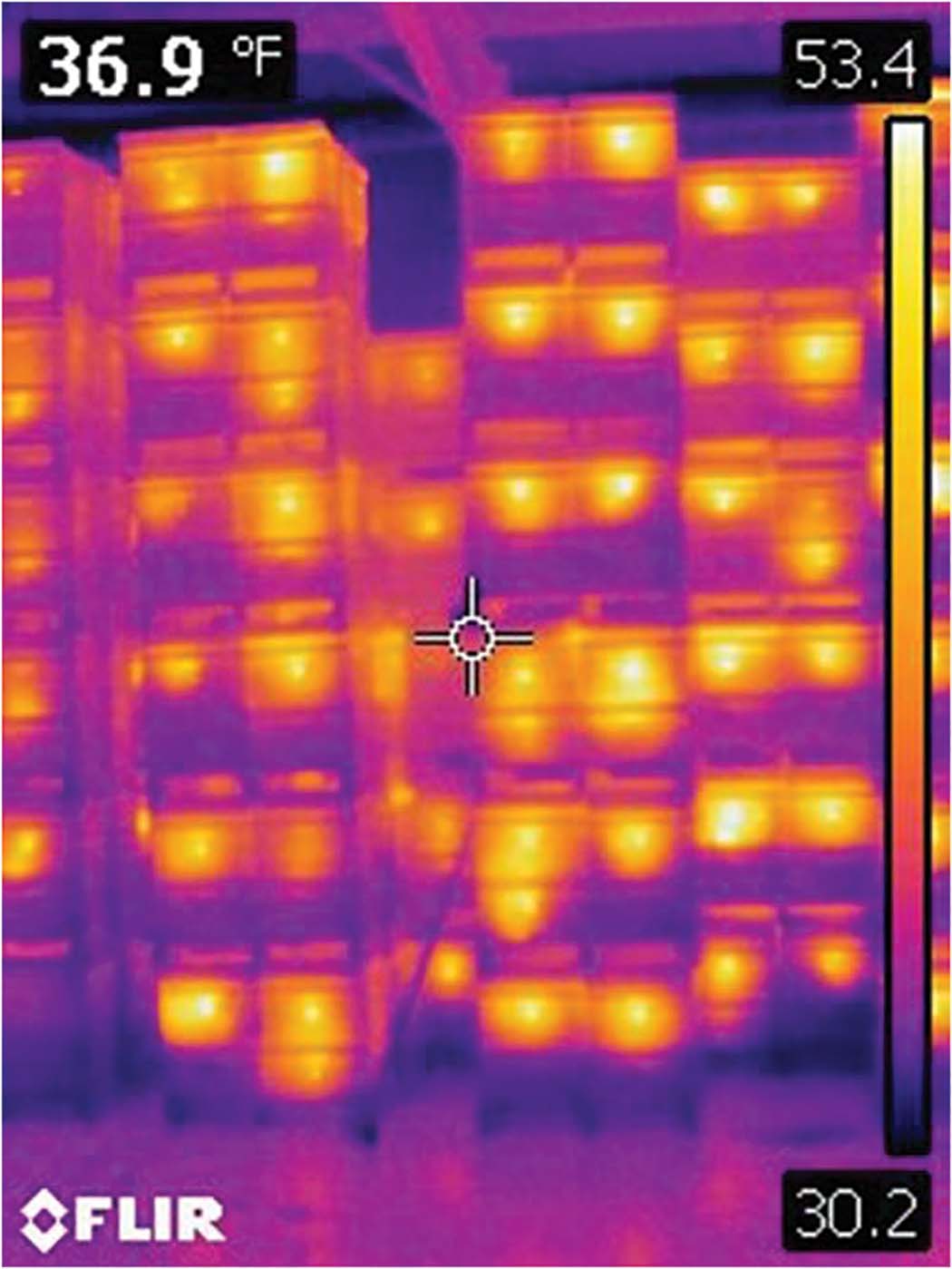 Compared to the E6-E8 cameras, the E40-E60 cameras cover comparable ranges of thermal resolution and add:

Are any of these advanced features of use to a beekeeper? Probably not, if the intent is primarily to screen for colonies in poor condition. I’d keep it simple with a point and shoot C2 or E4-E8 series camera – although before buying, I’d wait to see if the thermal resolution of the C2 will be improved in 2016. For accuracy and for visual decipherability, I prefer a resolution of 19,200 radiometric pixels or better. I also find manual temperature range and scaling to be an especially useful feature for discriminating thermal outlines such as cluster shape and size.

For any of these cameras, thermal resolution, cost, and sensitivity are important decision elements. Buying several lower cost cameras to distribute to amongst crew members and training them to use the cameras should provide a better return to a bee business in terms of improving efficiencies of labor and colony management than having only one high end camera. And if one gets lost, stolen, or broken, you’ve got spares.

If I made my living from bees, I’d want to have at least one top level E40, preferably an E60 camera to use for business promotion, and for specialty management options such as screening queen cells for viable queens.

For purposes other than simple colony size screening, the features of an E40-E60 camera greatly reduce likelihood of quickly outgrowing it or regretting having invested in the entry-level model. If I wanted to demonstrate delivery of a truck load of strong colonies to a grower, I’d want a professional, calibrated camera for quality control. But I wouldn’t give one of these cameras to just anyone, I’d keep it on a short leash.

Which brings me to actually using thermal IR cameras in a wintering shed and for loading trucks. I was surprised at how easily each pallet could be checked by a four member crew. One by one, the driver of a fork lift temporarily set each pallet on the floor. A trained crew member with an E40 camera walked around each pallet, looking at the tops and fronts of the hives, marking with chalk any dead, weak, or suspect colonies. Two crew members followed behind, checking marked boxes. The cover was lifted, and the top box tipped back to inspect the bottom box. Under the red lights at 38-45oF, this was quick and easy. Even when pulling frames to look for brood or a queen – only an occasional bee flew off. Weak colonies could be combined together, any dead ones removed, ensuring that every pallet had four viable colonies, sufficiently strong to make grade. These were then re-stacked, ready for loading. 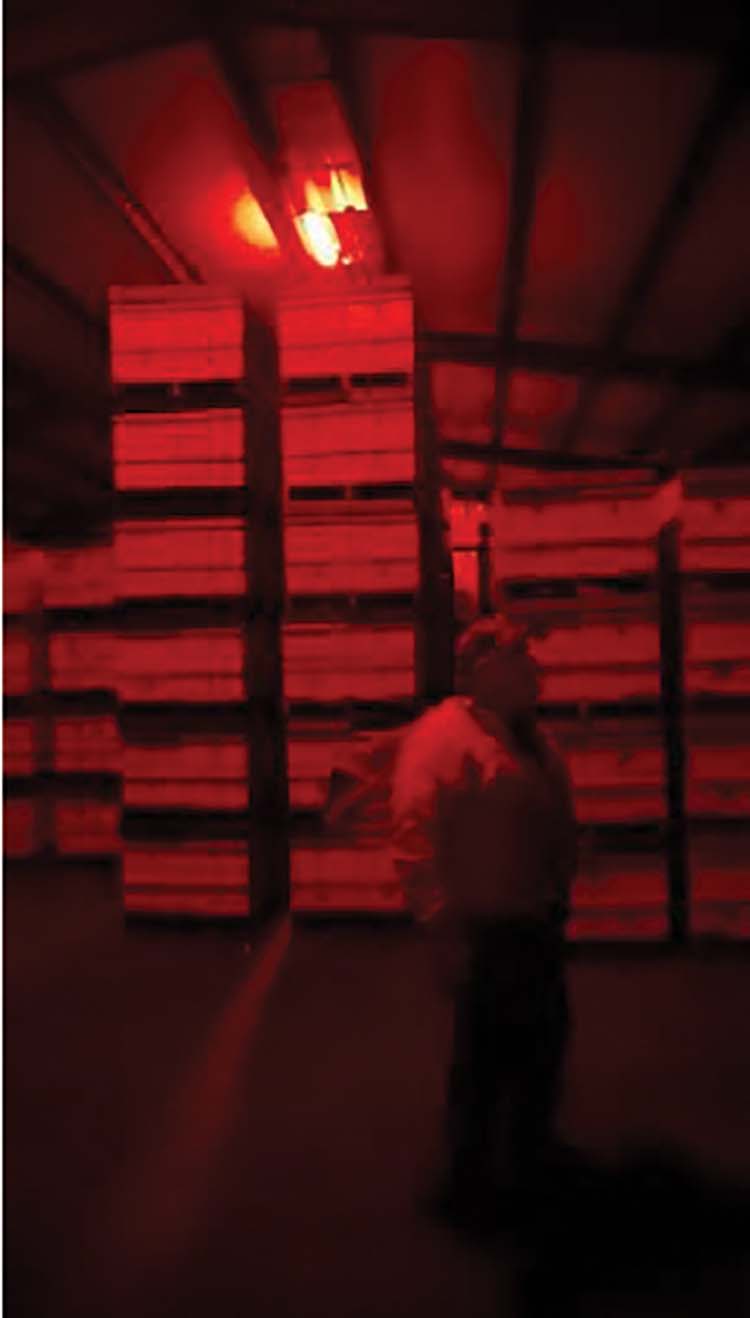 Trucks arrived just before or after dark. The overhead door was rolled back, the truck backed up to the door, and two fork lift operators loaded pallets, one on each side of the truck. After each truck was loaded, the load could be re-checked with the camera before being covered with netting.

Overall, under IR, strong colonies were obvious. Only a small proportion of colonies needed to be visually inspected. Occasional bee populations appeared to be smaller than they actually were, especially if the bees clustered against the back wall of a box, or on top of frames. The hives used by Arlee Apiaries have a spacer rim under the cover to make room for pollen patties. Bees sometimes piled on top of themselves in this space. Even more surprising were a few strong, queen-right colonies without brood, that weren’t producing much heat. In hind-sight, I should have thought to take samples of the bees from these colonies to check for evidence of issues such as Nosema ceranae. I know from my own prior research that healthy broodless colonies don’t always thermoregulate – apparently no brood, why worry? Very weak or dead colonies were obvious with IR. Remember, a thermal camera reads heat at the surface of the hive, it’s not truly through the wall imaging. Some ambiguity is to be expected, but it’s far better to get false negatives (looks weak, but is stronger) that can be checked than false positives (looks strong but isn’t).

In my next article, I’ll address the FLIR Tools software that accompanies these FLIR professional grade cameras. The software can only be used with true radiometric jpg images, so it can’t be to analyze or adjust images saved from entry level cameras. FLIR Tools provide image management, as well as data analysis and measurement tools, E- and T-Series camera updates, video streaming, and report creation, publication, and distribution.