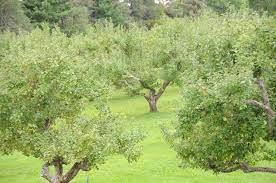 “It’s been a very busy season,” explains Ingram, who owns Okanagan Beekeeping Supplies. “A lot of beekeepers, commercial beekeepers, have started retiring in the Okanagan.

“So, the press is on as far as the growers go. There’s been a lot of calls this year.”

Among those retiring are Kaye and Bob Chisholm of Brainy Bee on Valley Road. They are moving back to Saskatchewan after 22 years in the valley, but don’t have anyone to take over the orchard pollination business.

“No, we have a daughter here and she’s been helping but she’s not interested in carrying on at the rate we were doing it,” said Kaye.

Ingram is in a similar situation. None of his family wants to take over when he’s ready to retire and he admits it is a lot of work.

That could be cause for concern. Many orchards depend on commercial beekeepers like Ingram and the Chisholms to deliver hives in the spring to ensure their crops are properly pollinated.

He notes there is a very short window when blooms are open and bees are an integral part of ensuring a good crop.

“Without hives placed in the orchard, there’s usually a little bit of a crop. Bees aren’t the only things that do the pollination but they do the biggest load of it.”

Gatzke is lucky enough to have a neighbour with hives, so he doesn’t have to rely on commercial beekeepers. His property also benefits from a lot of native bees visiting his trees because he’s close to the forest.

Others aren’t as fortunate. If they don’t manage to hire someone like Ingram, there are few other options. There are plenty of backyard hobbyist, but they’re not generally interested in moving their bees around to orchards.

Another concern this year is the impact of the varroa mite in Alberta, Saskatchewan and Manitoba. It has killed off millions of bees. In previous years, some orchards would bring in hives from Alberta, but Gatzke has yet to see any evidence of that happening this spring.

Until more people decide to get into the bee business, or growers find other ways to pollinate their crops, Ingram expects his phone to keep ringing off the hook.

We are here to share current happenings in the bee industry. Bee Culture gathers and shares articles published by outside sources. For more information about this specific article, please visit the original publish source: Beekeeper busy as hives that pollinate Central Okanagan orchards in short supply – Kelowna News – Castanet.net