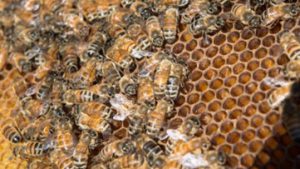 Bees are seen on a frame from a hive in a Montreal backyard in 2016. Nearly half of Canada’s honeybee colonies didn’t survive last winter, according to preliminary data. (Paul Chiasson/The Canadian Press)

Nearly half of Canada’s honeybee colonies didn’t survive the winter, the largest rate of colony loss in the country in the last 20 years, according to preliminary data.

Many factors can lead to the deaths of bees, but Guzman said he assumes the main factor behind the losses is the varroa mite — a parasitic bug that attacks and feeds on bees. The warm weather in the spring of 2021 led to an early pollinating season and strong colony expansion, but the weather conditions also favored the growth of varroa mites, he said.

“[Bee] colonies started to grow early in the season and ended up reproducing late in the season, so varroa populations also exploded and were very high at the end of the summer,” Guzman said in a recent interview, adding that most beekeepers wait until they harvest honey before they treat colonies for mites.

Beekeepers “usually start treating against mites in early fall, and that may be too late … when the population of mites had grown more than in other years,” he said.

Agriculture and Agri-Food Canada says the health of bees — along with their crop pollination and honey production — is vital to the environment and the economy.

“In Canada, the production of canola seed is by far the most economically significant crop produced with the contribution of honeybees, generating $12 billion in farm gate value in 2021,” the department said in a statement. It added that the government and the beekeeping industry are working together to address the high mortality of bee colonies and the impact of varroa mites.

An early spring and a long, hot summer last year are being blamed for parasitic mites getting a foothold in many hives, leaving Canadian beekeepers calling on the Canadian Food Inspection Agency (CFIA) to allow more bee imports from the U.S.

Guzman said while most beekeepers use pesticides to control the parasites, pesticides can’t be applied while there is honey in the hives. The honey industry, he added, may have to consider other treatments or harvest the honey earlier than usual in order to use the pesticides.

The government is funding studies on other treatments, investing more than $550,000 toward research on the efficacy and safety of three probiotics that can be potentially used to improve the health and survival rate of bees.

Guzman said recovering from last winter’s heavy losses will be costly. “Economically speaking it’s very difficult for the industry,” he said. “That means more money spent on bees from another beekeeper or packages of bees imported from another country. The more colonies you lose, the more money you will spend to make up for your losses.”

Canada imports bees from Australia and New Zealand. Guzman said beekeepers will do what they can to have healthy colonies heading into winter and will try to prevent another difficult cold season, which would be “another blow to the industry.”

“The industry is working hard to try to find solutions to the problem.”

We are here to share current happenings in the bee industry. Bee Culture gathers and shares articles published by outside sources. For more information about this specific article, please visit the original publish source: https://www.cbc.ca/news/science/canada-bee-mortality-1.6530171