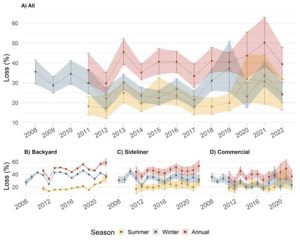 Note: This is a preliminary analysis. Sample sizes and estimates are likely to change. A more detailed final report is being prepared for publication in a peer-reviewed journal at a later date.

The Bee Informed Partnership (https://beeinformed.org) is a non-profit organization that works alongside beekeepers to improve honey bee colony health and survivorship across the United States. One of the organization’s longest running programs, the national Colony Loss and Management Survey, was initiated with the support of the Apiary Inspectors of America in 2007. Since then it has monitored managed honey bee colony loss rates and identified risk factors and protective measures associated with beekeeping management (Steinhauer, vanEngelsdorp and Saegerman, 2021).

This year marks the 16th anniversary of the survey, which relies on voluntary participation of beekeepers across the country during the month of April. It covered the one year period between April 2021 and April 2022.

This year, 3,601 beekeepers that collectively managed 335,946 colonies on 1 October 2021 in the United States provided validated survey responses. This represented 12% of the estimated 2.70 million managed honey-producing colonies in the country in 2021 (USDA NASS, 2022). 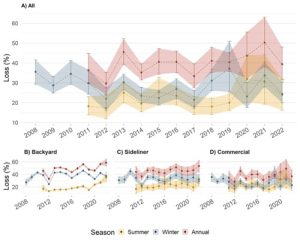 Figure 1: Seasonal managed honey bee colony loss rates in the United States across years (A), and by types of operations (B-D). The loss rate was calculated as the total number of colonies lost divided by the number of colonies at risk during the season. Colonies at risk were composed of viable colonies, as well as new colonies made or acquired, while excluding colonies sold or parted with. Annual loss covers the whole period from one 1 April to the next 1 April (in red); Summer (1 April – 1 October, in yellow); Winter (1 October – 1 April, in blue). Error bars represent the 95% confidence interval obtained from a bootstrap resampling of the data (n-out-of-n, 1000 rep).

Although the total number of honey bee colonies in the country has remained relatively stable over the last 20 years (~2.6 million colonies according to the USDA NASS Honey Reports), loss rates remain high, indicating that beekeepers are under substantial pressure to offset losses by creating new colonies every year. The Bee Informed Partnership’s annual Colony Loss and Management Survey offers an important record of such loss rates experienced by beekeepers across the United States each year. Before the start of the survey in 2007, no rigorous record was kept of the loss rates of colonies, making comparisons to historic levels difficult. In the last 16 years of the survey, our results have highlighted large variability in colony loss rates, not only among beekeeping operation types and locations, but also from year to year.

We are here to share current happenings in the bee industry. Bee Culture gathers and shares articles published by outside sources. For more information about this specific article, please visit the original publish source: https://beeinformed.org/citizen-science/loss-and-management-survey/