Honey bee larvae are frequently inspected and, sometimes, provided with food by adult workers, but the stimuli that elicit the important task of food provisioning have not been fully investigated.

When larvae of the three honey bee castes are starved under natural or laboratory conditions, some produce dwarf adults. Jay 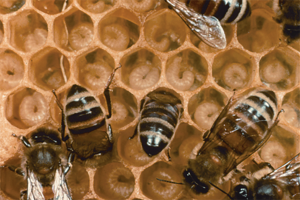 (1964) tested the effects of larval starvation on subsequent development; larvae of various weights were removed from their food and put into gelatin capsules.  The following development parameters were determined: (a) success in completing prepupal and pupal ecdyses (shedding of outer cuticle, molting), (b) weight after the pupal ecdysis, (c) time for development, and (d) type of adult reared. The longer the larval feeding period for the three castes, the more successful were the ecdyses. Developmental failure was high if worker, drone, and queen larvae were removed from their food when they were 60-65%, 85%, and 60-65% of the weights of control larvae, respectively. The developmental times of workers or drones did not vary significantly with the various larval weights but those of larvae from queen cells increased with decrease in larval weight. The various-sized adult drones reared did not appear to differ in gross external appearance but the smaller workers had proportionately longer wings than the larger ones. Adults reared from the smallest larvae from queen cells resembled workers (or intercastes) whereas those from the largest larvae resembled queens.

Honey bee larvae are frequently inspected and, sometimes, provided with food by adult workers, but the stimuli that elicit the important task of food provisioning have not been fully investigated. Larvae with their food experimentally deprived received more frequent inspection and feeding visits from nurse bees than normally fed larvae, suggesting that there could be a “hunger signal.” Food-deprived larvae with artificially supplied larval food received the same rate of feeding visits from nurse bees as did normally fed larvae but still received more inspection visits.  These results suggest that stimuli eliciting feeding are different from those for inspection. They also support the hypothesis that worker bees deposit food in a larval cell only when the quantity of food is below a certain minimum threshold that is perceived during larval inspections (Huang and Otis 1991).

“Workers in the brood nest (house bees) have abundant stored lipids and protein while foragers are depleted of these reserves; this depletion precedes the shift from nest work to foraging.”

A brood pheromone signaling the presence of larvae in a bee colony has been characterized and well studied. He et al. (2016) investigated whether honey bee larvae actively signal their food needs pheromonally to workers.  They showed that starving honey bee larvae signal to workers via increased production of the volatile pheromone E-ß-ocimene. Analysis of volatile pheromones produced by food-deprived and fed larvae with gas chromatography-mass spectrometry showed that starving larvae produced more E-ß-ocimene. Behavioral analyses showed that adding E-ß-ocimene to empty cells increased the number of worker visits to those cells, and similarly adding E-ß-ocimene to larvae increased worker visitation rate to the larvae. RNA-seq and qRT-PCR analysis identified three genes in the E-ß-ocimene biosynthetic pathway that were upregulated in larvae following 30 minutes of starvation, and these genes also upregulated in two-day old larvae compared to four-day old larvae (two-day old larvae produce the most E-ß-ocimene). This identifies a pheromonal mechanism by which brood can beg for food from workers to influence the allocation of resources within the colony.

Most animals can modulate nutrient storage pathways according to changing environmental conditions, but in honey bees 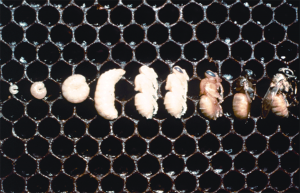 nutrient storage is also modulated according to changing behavioral tasks within a colony.  Specifically, bees involved in brood care (nurses) have higher lipid stores in their abdominal fat bodies than forager bees. Pheromone communication plays an important role in regulating honey bee behavior and physiology. In particular, queen mandibular pheromone (QMP) slows the transition from nursing to foraging. Fischer and Grozinger (2008) tested the effects of Queen Mandibular Pheromone (QMP) exposure on starvation resistance, lipid storage, and gene expression in the fat bodies of worker bees. They found that GMP-treated bees survived much longer compared to control bees when starved and also had higher lipid levels. Expression of vitellogenin RNA, which encodes a yolk protein that is found at higher levels in nurses than foragers, was also higher in the fat bodies of QMP-treated bees. No differences were observed in expression of genes involved in insulin signaling pathways, which are associated with nutrient storage and metabolism in a variety of species; thus, other mechanisms may be involved in increasing the lipid stores. These studies demonstrate that pheromone exposure can modify nutrient storage pathways and fat body gene expression in honey bees and suggest that chemical communication and social interactions play an important role in altering metabolic pathways.

Schulz et al. (1998) conducted three experiments to explore the effects of severe food shortage on the control of two important and interrelated aspects of temporal division of labor in honey bee colonies: the size and distribution of a colony’s foraging force. The experiments were conducted with single-cohort colonies, composed of entirely young bees, allowing them to quickly distinguish the development of new (precocious) foragers from increases in activity of bees already competent to forage. In experiment 1, colony food shortage caused an acceleration of behavioral development; a significantly greater proportion of bees from starved colonies than from fed colonies became precocious foragers, and at significantly younger ages. Temporal aspects of this starvation effect were further explored in experiment two by feeding colonies that they initially starved, and starving colonies that were initially fed. There was a significant decrease in the number of new foragers in starved colonies that were fed, detected one day after feeding. There also was a significant increase in the number of new foragers in fed colonies that were starved, but only after a two-day lag. These results suggest that colony nutritional status does affect long-term behavioral development, rather than only modulate the activity of bees already competent to forage. In experiment 3, they uncoupled the nutritional status of a colony from that of the individual colony members. The behavior of fed individuals in starved colonies was indistinguishable from that of bees in fed colonies, but significantly different from that of bees in starved colonies, in terms of both the number and age distribution of foragers. These results demonstrate that effects of starvation on temporal polyethism are not mediated by the most obvious possible worker-nest interaction: a direct interaction with colony food stores. This is consistent with previous findings suggesting the importance of worker-worker interactions in the regulation of temporal polyethism.

The age of onset of foraging in honey bee colonies is affected both by inhibitory social interactions among nestmates and starvation.  Schulz et al. (2002) determined whether starvation affects worker-worker interactions by quantifying the frequencies of five social interactions (trophallaxis, begging, offering, antennating, and grooming) in colonies that either were starved or well-fed. They hypothesized that bees in starved colonies engage in fewer social interactions than bees in colonies with ample food stores. In all three trials, starved colonies had significantly greater numbers of foragers than well-fed colonies, as in a previous study. In three of three trials, starved bees showed a significantly higher frequency of begging behavior than well-fed bees. Begging in starved colonies increased exponentially with time as the starvation presumably grew more severe. Immediately following the onset of foraging in starved colonies, the frequency of begging declined dramatically. No consistent differences for other observed social behaviors were found. Their results under starvation conditions do not provide support for the hypothesis that precocious forager development must be associated with a decrease in social interactions. Perhaps factors that influence precocious foraging under starvation conditions differ from those under conditions of ample food stores. They speculate that the duration and specific nature of the social contact may be important. Furthermore, they speculate that begging itself may be a cue associated with precocious forager development.

“Poor nutrition has major consequences for the expression of genes underlying the physiology and age-related development of nurse bees.”

Honey bee colonies, foraging predominantly on a single pollen source, may encounter nutritional deficits. Hendriksma and Shafir (2016) examined the nutritional resilience of honey bee colonies, testing whether foragers shift their foraging effort towards resources that complement a nutritional deficit. Eight honey bee colonies were kept in screened enclosures and fed for one week a pollen substitute diet deficient in a particular essential amino acid.  Foragers were subsequently tested for a preference between the same diet previously fed, a different diet that was similarly deficient, or a diet that complemented the deficiency. Foragers preferred the complementary diet over the same and similar diets. Appetitive conditioning tests showed that bees were able to discriminate also between the same and similar diets. Overall, their results support the hypothesis that honey bees prefer dietary diversity, and that they do not just include novel sources but specifically target nutritionally complementary ones.  While they specifically focused on deficiencies in essential amino acids, it cannot be ruled out that bees were also complementing correlated imbalances in other nutrients, most notably essential fatty acids. The ability of honey bees to counter deficient nutrition contributes to the mechanisms which social insects use to sustain homeostasis at the colony level.

Poor nutrition has major consequences for the expression of genes underlying the physiology and age-related development of nurse bees. Corby-Harris et al. (2014) aimed to further understand the transcriptional changes associated with starvation during early adult development. They assayed three day-old and eight day-old bees kept in normally functioning hives and caged over only honey (poor diet) or honey and bee bread (rich diet) and allowed trophallaxis with the rest of their colony. Substantial changes in gene expression occurred due to starvation. Diet-induced changes in gene transcription occurring in younger bees were largely a subset of those occurring in older bees, but certain signatures of starvation were only evident in eight day-old workers. Of the 18,542 annotated transcripts in the honey bee genome, 150 transcripts exhibited differential expression due to poor diet at three days of age compared with 17,226 transcripts that differed due to poor diet at 8 days of age, and poor diet caused more frequent down-regulation of gene expression in younger bees compared to older bees. In addition, the age-related physiological changes that accompanied early adult development differed due to the diet these young adult bees were fed. More frequent down-regulation of gene expression was observed in developing bees fed a poor diet compared to those fed an adequate diet. Functional analyses also suggest that the physiological and developmental processes occurring in well-fed bees are vastly different than those occurring in pollen deprived bees. Their data support the hypothesis that poor diet causes normal age-related development to go awry. More research is needed to fully understand the consequences of starvation and the complex biology of nutrition and development in this system, but the genes identified in this study provide a starting point for understanding the consequences of poor diet and for mitigating the economic costs of colony starvation.

Wang et al. (2016a) tested whether food deprivation during development can shift adult phenotypes to better cope with nutritional stress. After subjecting fifth instar worker larvae to short-term starvation, they measured nutrition-related morphology, starvation resistance, physiology, endocrinology and behavior in adults. They found that the larval starvation caused adult honey bees to become more resilient toward starvation. Moreover, the adult bees were characterized by reduced ovary size, elevated glycogen stores and juvenile hormone titers, and decreased sugar sensitivity. These changes, in general, can help adults survive and reproduce in food-poor environments. Their results suggest that this mechanism may play a role in honey bee queen-worker differentiation and worker division of labor, both of which are related to the responses to nutritional stress.