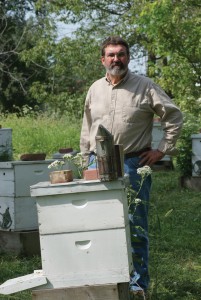 This will be my 3rd season as a beekeeper. Each year I like to learn new skills and this year I would like to trap some swarms. I’ve read about trap types, lures, and preferred locations and have placed three traps within 1/2 mile of my apiary. My question is if I should be fortunate enough to catch a swarm and hive them will the foragers return to the trap location and if so how can I prevent that. I can check the traps daily so would most likely take them home the same day near dark.

Thanks in advance for your help and the many interesting articles on your web site.

A: It’s true that, if you were trying to relocate an established hive, a move of half a mile would probably not be 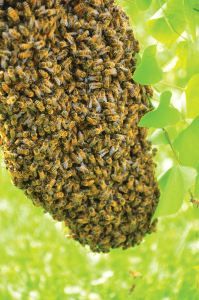 enough to prompt foragers to reorient upon making their first flights from the new site. They would be likely to try to return to the original location. However, if you check the bait hives daily, and move any swarm you catch before the foragers have a chance to orient themselves to the environs of the bait hive, you should not have a problem. Even if some should return there, your losses would be small. Because they need to build comb as quickly as possible, swarms are comprised of a large percentage of young, wax producing bees. By the time those bees are ready to make their first foraging flights, they will imprint on the site of their new home.

Though haven’t used bait hives in a number of years, I frequently hive swarms I catch in the vicinity of my house. I transfer them to a hive body, which I leave at the swarm location until near dusk in order to collect as many bees as possible, then move it to a new location in my bee yard nearby. I never have a problem with bees wanting to return to the original swarm site. Be aware though, that just because they don’t return to the trap location doesn’t mean that they will accept the hive you put them in. Placing a frame of brood or a few frames of drawn comb in the box will improve the chances that they will settle in. If they do abscond, they will most likely just move to a nearby tree or branch – not go back to where the swarm trap was originally located.

Beekeepers have long used traps or bait hives, both to recover swarms from their own hives and to capture feral colonies. I have a friend who ALWAYS leaves a bait hive in each of his out yards (bee yards that are not near his house), since he can’t visit all these locations every day during swarm season. A bait hive, an artificial potential nesting site designed to attract swarms, can be as simple as an empty hive body. Frames with wax foundation or old comb make it more enticing, though the problem with old comb is that it can also attract wax moths. Some beekeepers use specially constructed boxes or commercially produced swarm traps designed to mimic the characteristics of the natural nesting sites preferred by honey bees: cavity size, height above ground, and entrance size. Others go even further and use a chemical lure, a synthetic form of nasonov pheromone, which is used by bees for orientation and to mark entrances, foraging sites, swarm gathering sites, etc. (Bee Culture readers: I wrote more extensively about the use of bait hives in my May 2013 column. Contact me if you would like a copy.)

Since you have obviously been doing some research, you might be interested in the work of Dr. Tom Seeley, author of Honeybee Democracy – a very informative book about the decision making process during swarming. He also wrote a nice article about bait hives, though it doesn’t address your specific question. It can be downloaded from the Cornell University webpage: https://ecommons.cornell.edu/handle/1813/2653. In this helpful handout Dr. Seeley offers tips about bait hives, such as the best distance from the ground to place them (about 15 feet), the ideal box size (about 1.5 cubic feet), pheromone attractants, and other useful information.

Q: A beekeeper in Kentucky writes:

I’m a beekeeper here in Kentucky for the past five years. Last year I raised some queens and wintered one of those queens in a five frame nuc with a second nuc box on top with three more frames and a feeder inside (eight frames total plus a feeder). The colony made it through winter and yesterday (3-29-16) when I checked on it, there was some capped worker brood, open brood, and a patch of eggs a bit larger than a tin can. The odd thing about the eggs is that there were two to three eggs in most of the cells. At first I thought I had lost the queen and had a laying worker (I saw the eggs on a frame before I saw the brood and larvae on the next frame) but the queen was present on the next frame. All of the eggs were at the bottom of the cells, not up on the side like laying workers usually do. Is this common? Or is the queen just having some start up issues laying? Or is the queen wanting to lay but the workers haven’t cleaned up enough cells for the queen to lay as much as she wants too? (there are plenty of open cells, but the colony is quite small – maybe they just can’t cover the brood and eggs she wants to lay – I was really surprised they made it through winter as small as they were last fall.)

Thank for you time and thoughts . . .

A: No matter how long we work with these little creatures, they can always manage to surprise us with 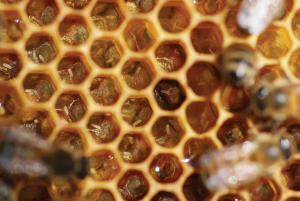 something we haven’t seen before. As long as you continue to see healthy worker brood, I would not be overly concerned. There are a few of possible explanations – none of them anything to worry about. New queens do sometimes lay multiple eggs in a cell; this one is not new, but she is young. I have also heard, though rarely, of more mature queens laying a few cells with multiple eggs. One of those occurrences was also in the early spring, so your suggestion of an over-eager queen is plausible. Another possibility is that you do have one or more egg laying workers. Under normal circumstances, a worker’s urge to lay is suppressed by the presence of queen and brood pheromones, but aberrations can occur. It is only in a queenless hive, when all the usual constraints are removed, that laying workers get out of hand and become a BIG problem. Your small colony has both a queen and brood.

Your suggestion that a small colony may not be able to utilize all the comb available to it is also accurate. I always say that it takes bees to raise bees, and a colony cannot make use of more comb than it can cover. The bees must not only clean out cells prior to the queen’s depositing eggs in them, but they must also maintain a cluster around the eggs and developing brood in order to sustain a temperature of about 90ºF. Thus no egg laying or brood production is possible outside the area of the cluster. This is one reasons that we strive for strong colonies going into Winter – not only to increase Winter survivability, but also to allow rapid growth in the Spring.

Just keep an eye on this hive as the season continues. If you continue to see worker brood, especially increasing amounts of it, you have nothing to worry about.

Q: A beekeeper in Wisconsin writes:

The last couple of years, we been treating our hives for mites with vaporized oxalic acid. Since it works best with minimal capped brood cells, would it be best to vaporize the hives immediately when I receive our bee packages. Would vaporizing the bees immediately interfere with the pheromones and acceptance of the queen or would I be better off waiting a week or so.

A: I have had the same idea myself. The use of oxalic acid as a quick and inexpensive control for Varroa mites 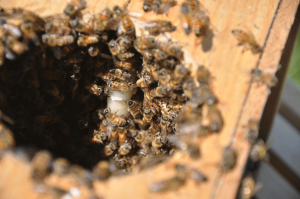 in package bees has long been discussed. It can be vaporized, sprayed, or drizzled, but however applied, it is a “flash treatment” the effects of which have a very short duration. As you obviously know, it kills only the mites on adult bees, leaving those inside capped brood cells untouched. Since a large percentage of the mites present in a hive is usually to be found in the brood cells where they reproduce, this is a serious drawback. After a treatment, mites which were sheltered in cells emerge, already mated, replete from feasting on pupae, and ready to continue their reproductive cycle. As a result, any reduction in the level of Varroa infestation is quickly compensated by the mites. The obvious way for beekeepers to overcome this problem is by treating during times of the year when there is very little or no brood present, such as in early Winter. (By using the vaporization method of application, treatment can be accomplished without ever opening a hive.) Because hives with newly installed packages contain no brood, they would seem to offer ideal conditions for the use of oxalic acid – if mite levels warrant treatment.

I have had concerns for some time about mites in package bees. Bee producers work hard to control Varroa and provide healthy bees to their customers, but mites are impossible to eradicate and difficult to keep in check. A relatively small number early in the year can proliferate rapidly during the spring build up because they breed while bees raise brood. Mite infestations can get out of hand quickly. Over the years, I have talked to so many new beekeepers, enthusiastic about starting their first package, who lost the entire colony to mites within the first year. I have become convinced that it is a good idea to monitor new packages for mites, and it’s fairly easy to do since the queen is caged and there is no risk of harming her during the process. I have some packages ordered myself, and I plan to conduct an alcohol wash on each one as I install them. (Bee Culture readers: I wrote about alcohol washes, and other methods of Varroa monitoring in an earlier column. Contact me if you would like a copy of that Q&A.)

That said, I think you’re wise to be cautious about treating packages too soon – with oxalic acid or any fumigant miticide. Every Spring I hear about a certain percentage of package bees absconding within a few days of installation, and no one can explain exactly why. Treating immediately might not cause a problem, but to be on the safe side, I would give the bees a week or so to get established first. Allow them to draw some comb, and the queen to leave the queen cage and begin laying. Mites do not move into the brood cells until late in the larval stage, so until the eggs begin to hatch, what Varroa is present will still be on the bees and highly susceptible to oxalic acid.

Good luck. Let me know how it goes.