By University of California – San Diego 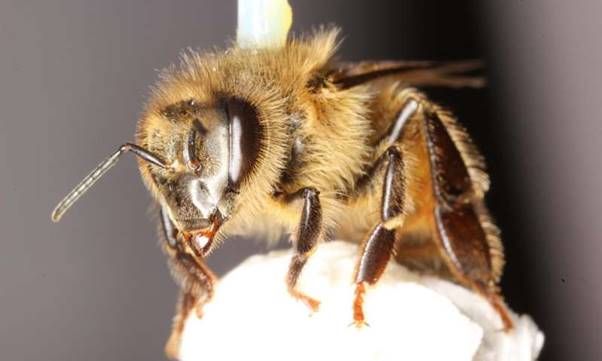 Biologists at the University of California San Diego have demonstrated for the first time that a widely used pesticide can significantly impair the ability of otherwise healthy honey bees to fly, raising concerns about how pesticides affect their capacity to pollinate and the long-term effects on the health of honey bee colonies.

Previous research has shown that foraging honey bees that ingested neonicotinoid pesticides, crop insecticides that are commonly used in agriculture, were less likely to return to their home nest, leading to a decrease in foragers.

A study published April 26 in Scientific Reports by UC San Diego postdoctoral researcher Simone Tosi, Biology Professor James Nieh, along with Associate Professor Giovanni Burgio of the University of Bologna, Italy, describes in detail how the neonicotinoid pesticide thiamethoxam damages honey bees. Thiamethoxam is used in crops such as corn, soybeans and cotton. To test the hypothesis that the pesticide impairs flight ability, the researchers designed and constructed a flight mill (a bee flight-testing instrument) from scratch. This allowed them to fly bees under consistent and controlled conditions.

Months of testing and data acquisition revealed that typical levels of neonicotinoid exposure, which bees could experience when foraging on agricultural crops—but below lethal levels—resulted in substantial damage to the honey bee’s ability to fly.

“Our results provide the first demonstration that field-realistic exposure to this pesticide alone, in otherwise healthy colonies, can alter the ability of bees to fly, specifically impairing flight distance, duration and velocity” said Tosi. “Honey bee survival depends on its ability to fly, because that’s the only way they can collect food. Their flight ability is also crucial to guarantee crop and wild plant pollination.”

Long-term exposure to the pesticide over one to two days reduced the ability of bees to fly. Short-term exposure briefly increased their activity levels. Bees flew farther, but based upon other studies, more erratically.

This pesticide does not normally kill bees immediately. It has a more subtle effect, said Nieh.

“The honey bee is a highly social organism, so the behavior of thousands of bees are essential for the survival of the colony,” said Nieh.” We’ve shown that a sub-lethal dose may lead to a lethal effect on the entire colony.”

Neonicotinoid insecticides are neurotoxic and used around the world on broad varieties of crops, including common fruits and vegetables, through spray, soil and seed applications. Evidence of these insecticides has been found in the nectar, pollen and water that honey bees collect.

“People are concerned about honey bees and their health being impaired because they are so closely tied to human diet and nutrition,” said Nieh. “Some of the most nutritious foods that we need to consume as humans are bee-pollinated.”

Furthering the agenda to help America’s farmers, the Department of Labor (the Department), Employment and Training Administration and Wage and Hour Division, today is posting online a Notice of Proposed Rulemaking (NPRM) to solicit public comment on proposed changes to improve the H-2A temporary agricultural labor certification program. These proposed changes would modernize the Department’s H-2A regulations in a way that is responsive to stakeholder concerns and enhances employer access to a legal source of agricultural labor, while maintaining the program’s protections for the U.S. workforce and enhancing enforcement against fraud and abuse.

The NPRM includes several major proposals that would streamline and simplify the H-2A application process, strengthen protections for U.S. and foreign workers, and ease unnecessary burdens on employers. For example, the NPRM would streamline the H-2A application process by mandating electronic filing of job orders and applications, promoting the use of digital signatures, and providing employers with the option of staggering the entry of H-2A workers on a single application.

The NPRM also proposes to strengthen protections for U.S. and foreign workers by enhancing standards applicable to rental housing and public accommodations, strengthening surety bond requirements, expanding the Department’s authority to use enforcement tools like program debarment for substantial violations of program rules, and updating the methodologies used to determine the Adverse Effect Wage Rates and prevailing wages to ensure U.S. workers similarly employed are not adversely impacted.

Finally, the NPRM would expand access to the H-2A program by revising the definition of agricultural labor or services to include employers engaged in reforestation and pine straw activities, as workers performing these services share many of the same characteristics as traditional agricultural crews. The proposal would also codify and update procedures governing the certification for job opportunities in animal shearing, custom combining, beekeeping, and reforestation.

The Department is posting a copy of the NPRM in advance of its publication in the Federal Register. A copy of the NPRM can be found by clicking here. https://www.foreignlaborcert.doleta.gov/pdf/2019-07-15-ETA-1205-AB89-Temporary-Agricultural-Employment-of-H-2A-Nonimmigrants.pdf