By: Ginger Rowsey, University of Tennessee Institute of Agriculture 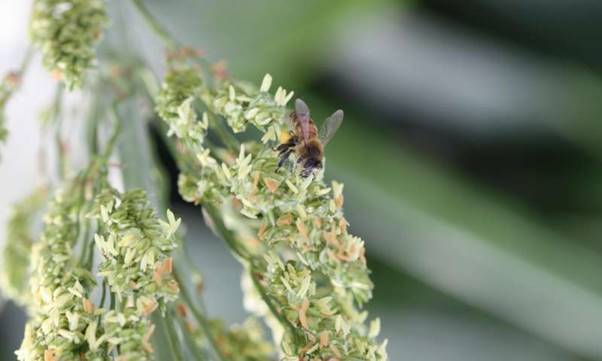 In a recent study, researchers with the University of Tennessee Institute of Agriculture found the overall health of honey bees improved in the presence of agricultural production, despite the increased exposure to agricultural pesticides. – Credit: Scott Stewart

While recent media reports have condemned a commonly used agricultural pesticide as detrimental to honey bee health, scientists with the University of Tennessee Institute of Agriculture have found that the overall health of honey bee hives actually improves in the presence of agricultural production.

The study, “Agricultural Landscape and Pesticide Effects on Honey Bee Biological Traits” which was published in a recent issue of the Journal of Economic Entomology, evaluated the impacts of row-crop agriculture, including the traditional use of pesticides, on honey bee health. Results indicated that hive health was positively correlated to the presence of agriculture. According to the study, colonies in a non-agricultural area struggled to find adequate food resources and produced fewer offspring.

“We’re not saying that pesticides are not a factor in honey bee health. There were a few events during the season where insecticide applications caused the death of some foraging bees,” says Mohamed Alburaki, lead author and post-doctoral fellow with the University of Tennessee Department of Entomology and Plant Pathology (EPP). “However, our study suggests that the benefits of better nutrition sources and nectar yields found in agricultural areas outweigh the risks of exposure to agricultural pesticides.”

Alburaki and fellow researchers established experimental apiaries in multiple locations in western Tennessee ranging from non-agricultural to intense agricultural production. Over the course of a year, colonies were monitored for performance and productivity by measuring colony weight, brood production and colony thermoregulation. Colony thermoregulation, or the ability to maintain an optimal temperature within a hive, is an important factor in brood development and the health of the resulting adult bees.

According to the study, hives located in areas with high to moderate agricultural vegetation grew faster and larger than those in low or non-agricultural areas. Researchers suggest the greater population sizes enabled better colony thermoregulation in these hives, as well.

Disruptions and fluctuations in brood rearing were also more notable in a non-agricultural environment. Interestingly, brood production was highest in the location that exhibited a more evenly distributed mix of agricultural production, forests and urban activity.

“One possible explanation for this finding could be the elevated urban activity in this location,” says Alburaki. “Ornamental plantings around homes or businesses, or backyard gardens are examples of urban activity that increase the diversity of pollen in an area. Greater pollen diversity has been credited with enhancing colony development.”

Researchers also evaluated trapped pollen from each colony for pesticide residues. Low concentrations of fungicides, herbicides and insecticides were identified, but at levels well below the lethal dose for honey bees. Imidacloprid was the only neonicotinoid detected, also at sub-lethal levels.

Agricultural pesticides, particularly neonicotinoids, are considered by some to be a key factor in declining honeybee populations. The UTIA study found that higher exposure to pesticides in agricultural environments did not result in measurable impacts on colony productivity.

Furthering the agenda to help America’s farmers, the Department of Labor (the Department), Employment and Training Administration and Wage and Hour Division, today is posting online a Notice of Proposed Rulemaking (NPRM) to solicit public comment on proposed changes to improve the H-2A temporary agricultural labor certification program. These proposed changes would modernize the Department’s H-2A regulations in a way that is responsive to stakeholder concerns and enhances employer access to a legal source of agricultural labor, while maintaining the program’s protections for the U.S. workforce and enhancing enforcement against fraud and abuse.

The NPRM includes several major proposals that would streamline and simplify the H-2A application process, strengthen protections for U.S. and foreign workers, and ease unnecessary burdens on employers. For example, the NPRM would streamline the H-2A application process by mandating electronic filing of job orders and applications, promoting the use of digital signatures, and providing employers with the option of staggering the entry of H-2A workers on a single application.

The NPRM also proposes to strengthen protections for U.S. and foreign workers by enhancing standards applicable to rental housing and public accommodations, strengthening surety bond requirements, expanding the Department’s authority to use enforcement tools like program debarment for substantial violations of program rules, and updating the methodologies used to determine the Adverse Effect Wage Rates and prevailing wages to ensure U.S. workers similarly employed are not adversely impacted.

Finally, the NPRM would expand access to the H-2A program by revising the definition of agricultural labor or services to include employers engaged in reforestation and pine straw activities, as workers performing these services share many of the same characteristics as traditional agricultural crews. The proposal would also codify and update procedures governing the certification for job opportunities in animal shearing, custom combining, beekeeping, and reforestation.

The Department is posting a copy of the NPRM in advance of its publication in the Federal Register. A copy of the NPRM can be found by clicking here. https://www.foreignlaborcert.doleta.gov/pdf/2019-07-15-ETA-1205-AB89-Temporary-Agricultural-Employment-of-H-2A-Nonimmigrants.pdf