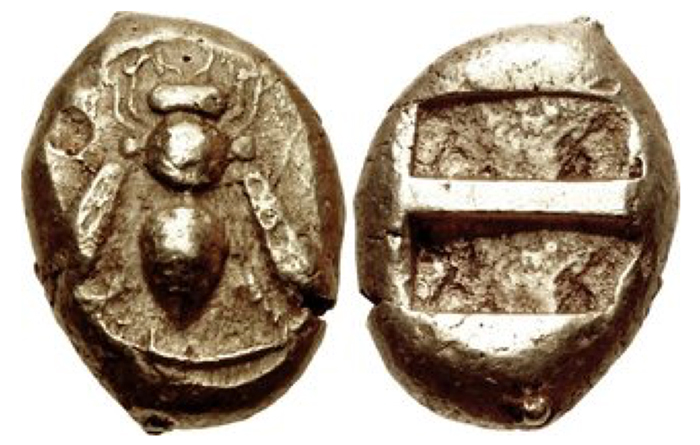 Ephesus and the Cult of Artemis

From the dawn of human society, the nature and origin of the bee have awakened the curiosity and interest of man. For thousands of years, honey was the only sweetening material known, and it is quite natural that in ancient times, the little busy creature who produced this sweet food should have been regarded with reverence and awe (Ransome, 19).

LONG BEFORE people developed agriculture and lived in settled communities, honey gathered from the hives of wild bees was valued as a precious, almost magical commodity. The honeybee (Apis mellifera) is native to the lands around the Mediterranean Sea, and domestication of the honeybee as a pollinator was vital for the growth of many fruit crops[1] in the region. It was so valued, for example, that the hieroglyph for “bee” (a profile drawing of the insect) came to be used as the symbol for the ruler of Lower Egypt.

Ephesos (above). Circa 550 BC. EL Hemistater (13mm, 6.86 g). Bee / Two parallel narrow rectangular incuses (struck from a single punch). Triton X, lot 289;. Good VF. Extremely rare, one of only two published. From the collection of Dr. Lawrence A. Adams

Images of the bee as a symbol appear very early in the development of ancient Greek coinage. In particular, the prosperous city of Ephesus in Ionia (on the Aegean coast of Turkey) adopted the bee as its civic emblem. Ephesus was the location of a famous temple of the goddess Artemis[2] (one of the Seven Wonders of the ancient world.) The high priest of the temple was known as the “king bee” (living in a fiercely patriarchal society, Greeks believed the queen bee was male) and the priestesses were called melissae (honeybees). There are nearly a thousand different known types of bee-and-stag coins from Ephesus, and unpublished new varieties appear frequently[3]. One of the earliest known examples, a rare electrum hemistater (6.86 grams) dated to c. 550 BCE brought $25,000 USD (against a $10,000 estimate!) in a 2015 auction[4]. 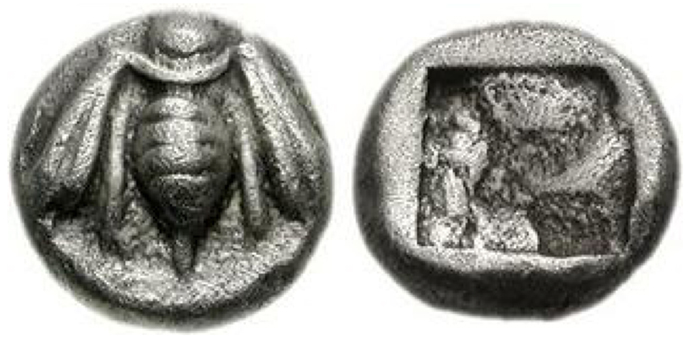 Bees have two pairs of wings, but conventional ancient representations of the bee, as viewed from above, typically only show one pair. A little archaic[5] silver obol of Ephesus, c. 550-500 BCE, is a remarkable exception, showing all four wings[6

Early in the classical era (c. 480-450 BCE), bees on silver drachms of Ephesus were drawn with curved wings and curly antennae, giving the insect a rather whimsical appearance[7]. 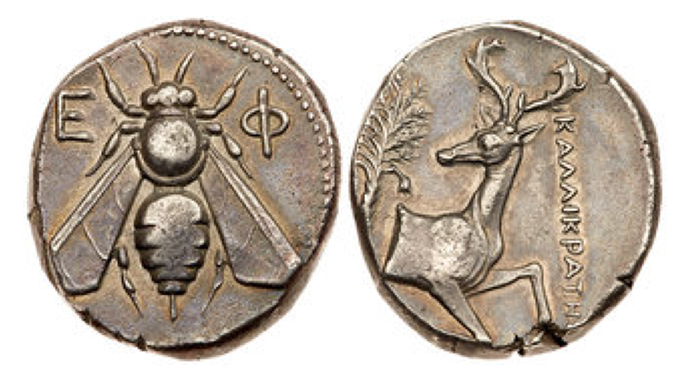 Ephesos. Silver Tetradrachm (15.10 g), ca. 350-340 BC. Kallikrates, magistrate. E-Φ, bee. rev. Forepart of stag right, head turned to look back; in left field, palm tree; in right field, magistrate’s name: KAΛΛIKPATH[Σ]. Kinns obv. die O125; SNG Copenhagen -. Well struck and well centered. Excellent metal and delicately toned. Nearly Extremely Fine. Estimated Value $750By the fourth century BCE, Ephesian die-cutters, growing in skill and confidence, were engraving far more “realistic” bees: note the stinger, the jointed legs and the accurately segmented abdomen of the insect on a tetradrachm dated c. 350 – 340 BCE[8]. Popular with collectors, these classic coins are inscribed with the abbreviated name of the city (E-Φ) on the obverse, and alongside the stag on the reverse the name of a current “magistrate” (civic official or mint director?) is spelled out.

In 356 BCE, the crazed arsonist Herostratos destroyed the Temple of Artemis, and over the following centuries, it was repeatedly rebuilt and demolished. Caught up in the complex politics of the Hellenistic era, the city stubbornly continued to issue civic coinage bearing the bee and stag down to about 133 BCE[9]. Coinage is conservative!

The bee disappears from Ephesian coinage after Ephesus becomes part of the Roman empire as the capital of the province of Asia. The image of the Emperor normally appears on the obverse of Roman provincial coins, so there was no place for the bee.

Other Towns and Cities

A number of other Greek cities adopted the bee as an image on their coins, perhaps because they had economic ties to Ephesus or hosted a local cult of Ephesian Artemis.

The side view of the bee (similar to the Egyptian hieroglyph) is extremely rare on ancient coins but it does appear on a tiny hemiobol (0.26 grams) from an uncertain Ionian mint[10], along with a turtle on the reverse.

Bees also sometimes appear as decorations on ancient “coin-like objects” or tokens, such as a thin gold disc of uncertain date that appeared in a 2007 US auction[11]. One theory is that such discs (“Charon’s obols”) were magical artifacts buried with the dead to pay Charon, the boatman who ferried souls to the afterlife.

In 202 BCE, Ephesus established an alliance with the Phoenician city of Arados (now Arwad, a small island off the Syrian coast south of Tartus). Arados later marked this event by adopting the bee and stag design for its coinage[12]. Coins of Arados can be distinguished by the name of city ARADION, inscribed in Greek on the reverse. This alliance evidently continued for decades. 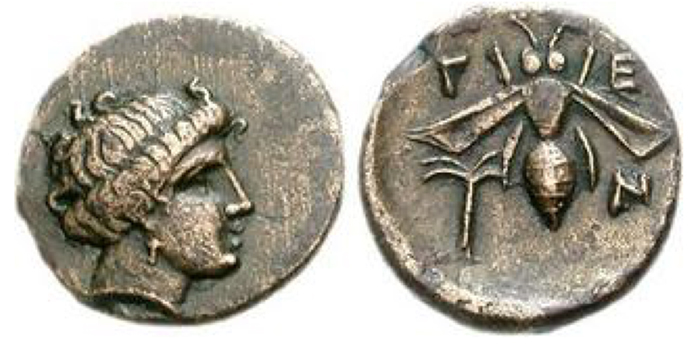 The small town of Gentinos in the region of Troas (northwest Anatolia) used a bee and palm tree on its fourth century BCE local bronze[13]. Praisos, on the island of Crete, placed a bee with a rose on the reverse of a rare silver hemidrachm circa the fourth to third centuries BCE[14]. Another Cretan town, Elyros, depicted a bee with an unusually detailed representation of the veins on the wings on its silver drachm, c. 300 – 270 BCE[15]. The obscure town of Iulis on the Aegean island of Keos placed a bee on the reverse of its third century BCE bronze coinage[16]. 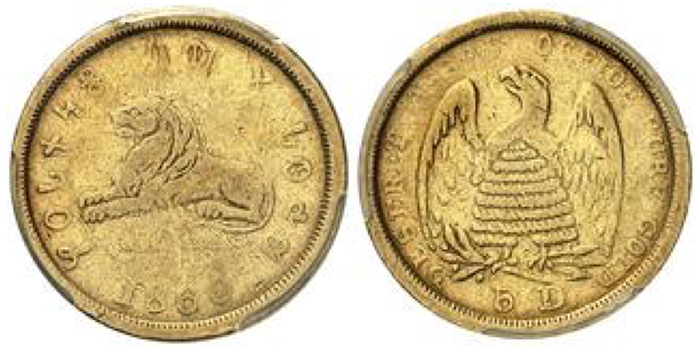 We cannot end this article without mentioning a famous and very rare “modern” coin that depicts a beehive. Struck by Mormon authorities at Salt Lake City in 1860 using gold mined in Colorado, fewer than 100 examples of this $5 Mormon gold piece are known. A well-worn example sold for over $36,000 in a recent European auction[19]. The design of a beehive among flowers surmounted by an eagle appears on the current state flag of Utah.