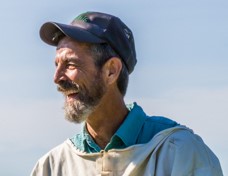 Internationally respected US beekeeping expert Jerry Hayes has been appointed vice president North America for Vita Bee Health to help beekeepers improve and maintain the health of their honey bees.

For almost four decades, Jerry Hayes has worked across the USA apicultural industry to promote sustainable beekeeping. As head apiarist of the State of Florida inspection service when Colony Collapse Disorder struck, he was on the front line helping Floridian beekeepers and their 300,000 plus colonies. For three decades, he has also been well-known and respected amongst beekeepers for his informative and entertaining column, The Classroom, for the American Bee Journal.

On his appointment, Jerry Hayes said, “Moving to Vita Bee Health gives me a bigger canvas to do positive things for beekeeping. Vita touches beekeeping at all levels – from the hobbyist right up to the large-scale operators. Since I first encountered Vita in the early 2000s, I have been impressed at the way they are always looking to innovate and to make an impact at the front line of beekeeping.”

Welcoming Jerry Hayes, Jeremy Owen, CFO of Vita Bee Health, said, “On the twentieth anniversary of our company, a strategic review of our global business confirmed the importance of our North American presence. The appointment of Jerry Hayes is a perfect fit for our business and is very timely as we introduce our new feed and pollen supplement products alongside the well-established varroa control products of Apiguard and Apistan.”

Max Watkins, CEO of Vita Bee Health, added, “I first met Jerry Hayes in Florida in 2006 just before CCD struck. I was immediately impressed by his communication skills and the respect with which he was held by beekeepers. He will make a very positive impact in our increasingly strong Vita team.”

Learn more, and listen to Jerry share what he knows on his latest podcast for Bee Culture magazine at www.Beekeepingtodaypodcast.com.