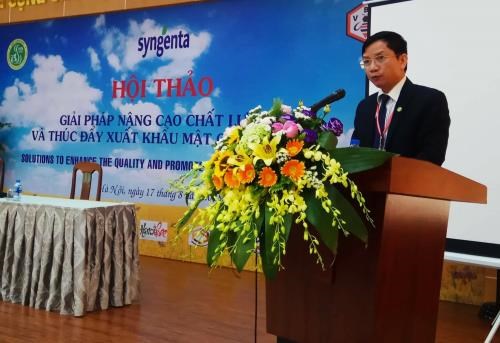 At the workshop (Source: VNA)

Hanoi (VNA) – The rate of ‘foreign’ honeybee species kept in Vietnam should be raised from 75 percent at present to 80 percent in 2020 in order to increase the quality and productivity of honey, heard a conference in Hanoi on August 17.

Dr. Dinh Quyet Tam from the Vietnam Beekeepers Association pointed out that although Vietnam exports a large quantity of honey, the price of the product stands at only 1.22 EUR (1.4 USD) per kg ($0.64/lb), the lowest worldwide, as compared with New Zealand’s honey price of 23.25 EUR per kg.

In 2017, Vietnam’s honey prices dropped sharply due to the lower quality of its acacia flowers, falling global honey prices, and fiercer competition. Besides this, Vietnamese honey has yet to establish its brand name on the global market.

It is reported that each year, Vietnam produces more than 55,000 tonnes of honey and over 1,000 tonnes of beeswax, with 85-90 percent of these products shipped abroad.

Vietnamese honey and beeswax are mainly exported to the US, European countries, and Japan.

According to the General Statistics Office, last year, the country had 1.2  million honeybee colonies, mainly made from Italian and local species. The country ranks sixth globally and second in Asia in terms of honey exports.

Tran Ngoc Lan, from the Department of Livestock Production under the Ministry of Agriculture and Rural Development, said beekeeping has generated more jobs and contributed to poverty reduction for farmers, especially those in remote and mountainous areas.

However, over the past three years, the volume and value of honey exports shrunk remarkably, causing difficulties for both beekeepers and exporters. –VNA