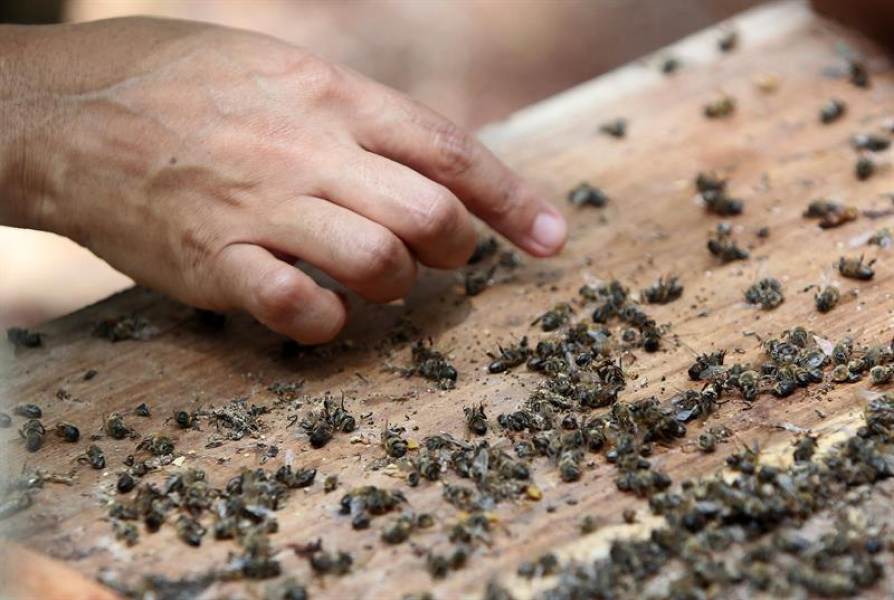 CANCUN, Mexico – The death of millions of bees in the apiaries of the La Candelaria commons, in the heart of the Maya area of Quintana Roo, inflicted disaster and desolation on the beekeepers of the region, who thought the possible cause could be the spraying of a nearby crop of habanero chili peppers.

Up to now some 365 beehives have been counted in 18 apiaries within a radius of 5 kilometers (3 miles) from the field of habanero peppers, which could be why the beekeepers are losing their main source of income.

The volume of bees affected has not been totally quantified, however, because more bees keep dying in hothouses farther away.

Also because, according to professors at the Maya Intercultural University of Quintana Roo, further studies are needed to analyze the impact on other types of insects such as butterflies, spiders and wild bee species, on the ground water and even on the health of farm workers exposed to the chemicals.

At more than two weeks after the first dying bees in the apiaries closest to the habanero peppers were reported, the beekeepers face losing the harvest season and all their installations, since after being contaminated, the hives must be burned to avoid spreading the poisonous insecticide.

Laureano Pech Esquivel has been dedicated to beekeeping “since I reached the age of reason” and was among the first to report the dying off of massive amounts of bees.

The land where he built his apiary and planted trees like cedars is less than 300 meters (980 feet) from the field of habanero peppers.

“Because the habanero field was covered, they didn’t spray it, but when they suddenly uncovered it, they applied that insecticide,” he told EFE.

In Laureano’s apiary the air was dense and smelled of putrefaction.

“It’s the dead bees that are rotting – they’re full of worms, there’s nothing to save here,” he said while running his eyes over the beehives that were once the source of the so-called liquid gold of the Mayan jungle: honey.

For now, the affected beekeepers are focused on getting authorities to do an in-depth investigation into what happened so that it never happens again and above all, so they get paid for the damage done to their business.

Wilson Ayala Mex is another of the affected beekeepers. During a tour of the area he told EFE that the economic losses won’t be easy to cover, so the only alternative is to get a ruling that the owner of the habanero field must pay for the damages.

“We didn’t get rid of them because the authorities told us not to move anything that will serve as evidence,” he said.