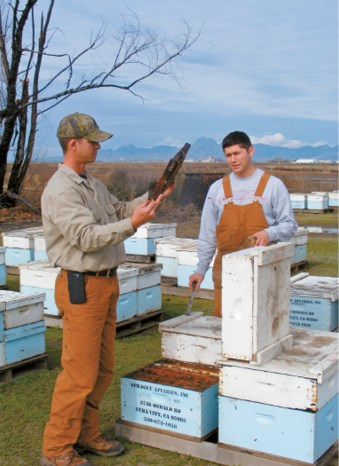 Kevin Sprague, left, and J.J. Vidaurri of Sprague Apiaries in Yuba City tend to honeybees in preparation for almond pollination. The beekeeping business lost about 280 beehives that were allegedly targeted by thieves, and estimates the loss at $100,000. Photo/Claudia Street

Just as honeybees are being moved into orchards to pollinate the state’s almond crop, thieves are stealing commercial beehives from roadside and bee yard locations, disrupting operations for beekeepers and almond growers whose trees are days away from bloom.

Kevin Sprague, whose family operates Sprague Apiaries in Yuba City, discovered early last week that 280 of his beehives were missing, as they were about to be moved into nearby almond orchards in Arbuckle. He estimated the loss at $100,000, which includes both pollination income and the overall value of the hives.

“The hives (marked with the company name, address and phone number) were stolen from two different locations along Highway 20, just east of Sutter,” said Sprague, a third-generation apiarist. “The hives were visible from the highway and had been there all winter, so they (thieves) certainly had lots of time to plan. They came with two or three trucks and a couple of forklifts. They were organized.”

Worried that he might be short of beehives for his almond grower client, Sprague said the company will check with other beekeepers to purchase any extra hives that do not yet have a home in the almonds. He said his concern is that a shortage of bees may be enticing thieves to steal hives.

“The bees are scarcer this year and this has driven up price, and then thieves try and make a quick dollar,” Sprague said. “I’ve heard that they’ll steal the hives, put them in the farmer’s orchards and come and get the money. They will abandon the bees in the orchards; they just take the money and run.”

The California State Beekeepers Association reported that during the week of Jan. 25, about 240 beehives owned by C.F. Koehnen & Sons of Glenn County were allegedly stolen from two bee yards, both located north of Colusa. The hives, lids, frames and pallets are branded with “42-14.”

During the same week, Riverside County beekeeper James Wickerd of Happie Bee Co. reported that 210 of his beehives were stolen in Kern County. The boxes contain Wickerd’s name, address and phone number, and the brand CA0330333H.

“The hives could be seen along the I-5 freeway. They came in with forklifts and took about 210 hives, valued at $50,000 plus,” Wickerd said. “They can put them on pollination right now for $150 or more a hive, and then there is the value of the hive and the (honey) production losses for the year.”

Wickerd added that the losses include “all of the work that has been put into them to keep them alive with feeding and medication and pollen to get them in the shape that they are in.”

Sprague expressed the same concern, noting the investment of money plus thousands of hours devoted to building and caring for the hives: “We work on the hives all year to get ready for spring. It will take me the whole year to recuperate what we lost.”

Beekeepers from California and across the U.S. have already moved about 1.8 million honeybee colonies into the state to pollinate the almond crop. Bee colony supplies are usually tight at this time of year, and observers said the added pressures of drought, lack of forage, and impacts from pests and diseases have made the difference in supplies even more pronounced.

Elina L. Niño, University of California, Davis, Extension apiculturist, noted in her latest university newsletter on apiculture that “the reports of failing colonies before the winter even started are numerous. This, combined with the much needed rainfall in California, might be driving the price of hive rental up to $200.”

Wickerd said he has additional hives available to cover the contract with his almond grower client but added that, like other beekeepers, he will look at high-tech ways to protect his bees in the future.

“We’re going to have to electronically protect them. If we have something that is high-tech that is connected to the satellite that can tell where the bees are, if the location of the bees changes, we can go find them,” Wickerd said. “We’re going to go to satellite, where it can be traced from a computer and at a long distance.”

Sutter County Sheriff’s Office Lt. Dan Buttler agreed beekeepers would benefit from implementing newer technology, such as use of global positioning systems or trail cameras, to protect their valuable bees and trace bees that are stolen.

“You can get lower-end GPS devices that are motion sensitive, and they can put those on the box. It would alert them that these boxes are being moved, so we could pick them off in transit,” Buttler said. “Obviously, locked gates are always a good thing, surveillance is a good thing, and high-tech is a good thing.”

Other tips for preventing bee theft:

CSBA offers up to $10,000 for information that leads to the arrest and conviction of persons responsible for stealing bees and/or beekeeping equipment; learn more at castatebeekeepers@hotmail.com.

(Christine Souza is an assistant editor of Ag Alert. She may be contacted at csouza@cfbf.com.)