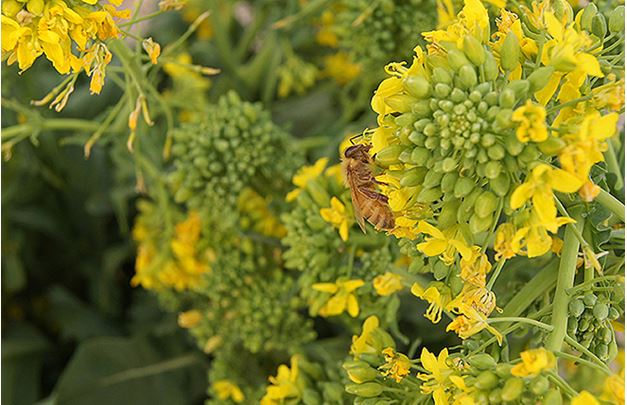 Popular in Italy but also grown the United States, rapini (or broccoli raab) is a turnip-like vegetable that’s featured in the recipes of cable television’s top celebrity chefs. But foodies are not the only fans of rapini. Honey bees love it too—or more precisely, they love rapini’s bright-yellow, pollen-packed flowers.

Now, in the journal Apidologie, a team led by Agricultural Research Service entomologist Gloria DeGrandi-Hoffman reports results of studies in which honey bees in managed colonies fared better on rapini pollen than on protein supplements. The team began the project in 2012 at the request of California’s almond industry, which relies on managed bee colonies to pollinate the state’s 800,000-acre nut crop, which starts flowering in February.

During the fall, more than a million bee colonies are transported to California by beekeepers from throughout the United States, according to DeGrandi-Hoffman, who leads ARS’s Carl Hayden Bee Research Center in Tucson, Arizona. But the journey and the absence of natural food sources can take a heavy toll on the bees, especially nurse bees and brood (young). “The flow of nutrients through nurse bees affects colony size which, in turn, affects pollination and ultimately almond yields,” she explains.

One way beekeepers tide the colonies over until February when almonds bloom is to feed them specially formulated protein supplements. However, in the researchers’ 2-year study, the supplements didn’t supply all of the bees’ nutritional needs. What’s more, the protein in the supplements was not well digested; about 65 percent of it was excreted as waste. “With rapini pollen, only about 30 percent of the protein was lost,” DeGrandi-Hoffman reports.

In the supplement-fed colonies, the reduced protein digestion, combined with lower levels of certain essential amino acids, might have resulted in malnutrition and contributed to higher queen losses and greater incidence of disease, she says.

Other findings from the study, which ran from November to February at two different sites were:

The researchers investigated rapini because of its cold-hardiness, attractiveness to bees, and ability to flower 6 weeks after planting—characteristics that could not only benefit overwintering bees in California, but in other states as well.

“These side-by-side data comparisons haven’t been done before,” says DeGrandi-Hoffman of her team’s ongoing studies. “But they are already showing the value of providing bees with a natural forage.”—By Jan Suszkiw, Agricultural Research Service Information Staff.