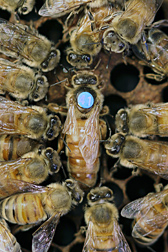 Temperature extremes during shipping and elevated pathogen levels may be contributing to honey bee queens failing faster today than in the past, according to a study just published by U.S. Department of Agriculture (USDA) scientists in the scientific journal PLOS One.

“Either stress individually or in combination could be part of the reason beekeepers have reported having to replace queens about every six months in recent years when queens have generally lasted one to two years,” explained entomologist Jeff Pettis with the Bee Research Laboratory in Beltsville, Maryland, who led the study. The Bee Research Laboratory is part of USDA’s Agricultural Research Service.

Queens only mate in the first few weeks of life. Then they use the stored semen to fertilize eggs laid throughout their life. Queen failure occurs when the queen dies or when the queen does not produce enough viable eggs to maintain the adult worker population in the colony. Replacing queens cost about $15 each, a significant cost per colony for beekeepers.

Commercial beekeepers usually order their replacement queens already mated, and the queens are shipped to apiaries from March through October. Researchers questioned whether temperature extremes during shipping could damage the sperm a queen has stored in her body. During simulated shipping in the lab, inseminated queens exposed to 104° F (40° C) for 1-2 hours or to 41° F (5° C) for 1-4 hours had sperm viability drop to 20 percent from about 90 percent.

In real-world testing, queens, along with thermometers that recorded the temperature every 10 minutes, were shipped from California, Georgia and Hawaii to the Beltsville lab by either U.S. Postal Service Priority Mail or United Parcel Service Next Day Delivery in July and September. Researchers found that as many as 20 percent of the shipments experienced temperature spikes that approached extremes of 105.8° F and 46.4° F for more than 2 hours at a time. Those exposed to extreme high or low temperatures during shipping had sperm viability reduced by 50 percent.

“The good news is with fairly simple improvements in packaging and shipping conditions, we could have a significant impact on improving queens and, in turn, improving colony survival,” Pettis said.

Assessments of the queens sent in by beekeepers for this study found that almost all of them had a high incidence of deformed wing virus; Nosema ceranae was the next most commonly found pathogen.

“We saw wide variation in both pathogen levels and sperm viability in the queens that were sent in to us, and sometimes between queens from the same apiary in July and September, so there is still more research to do. But getting queens back to lasting two years may well be one of the links in getting our beekeeping industry back to a sustainable level,” Pettis said.

The Agricultural Research Service (ARS) is the U.S. Department of Agriculture’s chief scientific in-house research agency. The Agency’s job is finding solutions to agricultural problems that affect Americans every day from field to table. ARS conducts research to develop and transfer solutions to agricultural problems of high national priority and provide information access and dissemination to ensure high-quality, safe food, and other agricultural products; assess the nutritional needs of Americans; sustain a competitive agricultural economy; enhance the natural resource base and the environment and provide economic opportunities for rural citizens, communities, and society as a whole.