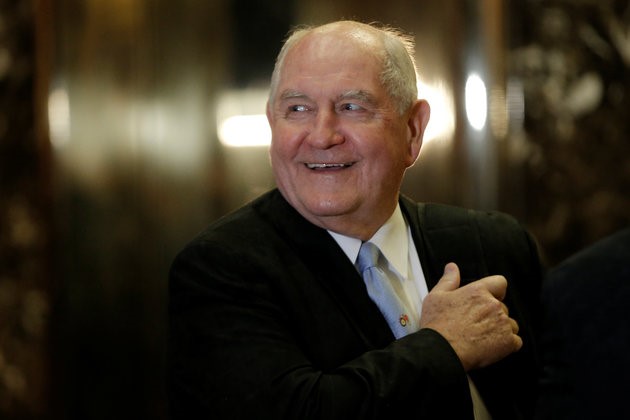 Sonny Perdue, In at AG. Photo by Mike Segar/REUTERS 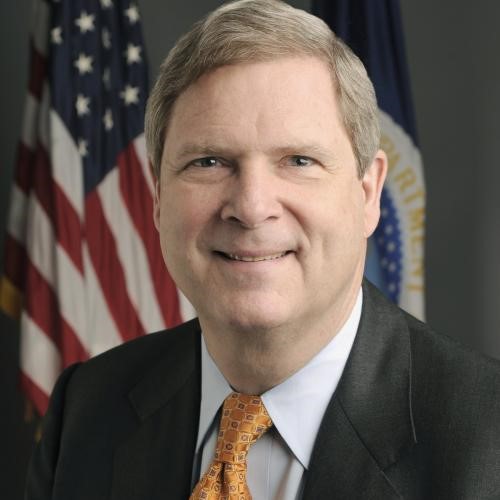 Perdue, 70, served on Trump’s agricultural advisory committee during his presidential campaign. His nomination, which must be confirmed by the Republican-led Senate, will complete Trump’s proposed Cabinet just two days before he is sworn in as president on Friday.

During his time as governor, Perdue’s key agricultural issues included water management and making changes to the tax code that were beneficial to farmers, said Jeffrey Harvey, legislative director for the Georgia Farm Bureau.

In 2007, with Georgia and other areas of the South hit by a severe drought, Perdue took steps to cut water usage in his state and at one point led a service outside the state capitol to pray for rain.

Perdue, a Republican, was elected to two terms as governor, serving from 2003 to 2011. Before that, he served in the state Senate representing a rural swath of the state about 100 miles (160 km) south of Atlanta. He switched political parties from Democratic to Republican in 1998 amid redistricting in the state and shifting demographics.

Like Trump, Perdue swept into office buoyed by rural white voters who had grown disenchanted with politics in a Southern state that like the country at large has seen its politics deeply divided between more conservative rural areas and more liberal urban ones.

Trump received strong support from the agricultural community as the farm economy slumped amid falling prices for key commodities such as corn and wheat.

After finishing his second term as governor, Perdue founded Perdue Partners, a global trading firm that consults and provides services for companies looking to export products.

His cousin David Perdue, a fellow Republican, is serving his first term representing Georgia in the U.S. Senate. The nominee is not related to chicken magnate Frank Perdue.

The U.S. Dairy Export Council (USDEC) announced today that former Secretary of Agriculture Tom Vilsack will join the organization as the president and CEO.

Vilsack ended his 8-year tenure as the head of the USDA a week early, giving notice to employees last Friday that it would be his last day. He did not give a reason for his early departure, although it did call attention, again, to the fact that President Trump has not named Vilsack’s replacement. Undersecretary Michael Scuse will be acting secretary until this Friday. Then the role will be handed to a civil servant, who the USDA has not announced.

Vilsack will start his new role at the USDEC on February 1. USDEC is a non-profit, independent organization that works to enhance the global demand for U.S. dairy products and ingredients.

As president and CEO, Vilsack will provide strategic leadership and oversight of USDEC’s global promotional and research activities, regulatory affairs, and trade policy initiatives. This includes working with industry leaders to develop a long-term vision for building sales and consumer trust in U.S. dairy.

“Growing the global market for U.S. dairy products is essential to the future of the dairy industry and America’s dairy farmers. I’ve spent my career in public service as a tireless advocate for farmers and American agriculture and can think of no better way to continue this service than by leading the U.S. Dairy Export Council,” says Vilsack. “I look forward to partnering with the dynamic team at USDEC as well as agriculture, food industry, and key stakeholders at home and abroad to advance the council’s mission and strengthen trust in American dairy.”

Vilsack will succeed Tom Suber, who served as president of USDEC since its founding in 1995, and retired at the end of 2016.

“The global dairy market is more competitive today than ever. Ambitious trade agreements, reasonable labeling, and product standards, and other issues are vital to the growth of America’s dairy industry,” says Thomas Gallagher, CEO of Dairy Management Inc., the umbrella organization that represents the broad interests of U.S. dairy and founded USDEC in 1995. “Secretary Vilsack’s impressive record of leadership and his proven ability to manage complex issues, combined with his breadth and depth of industry knowledge, made him the preeminent choice to take the helm of USDEC.”