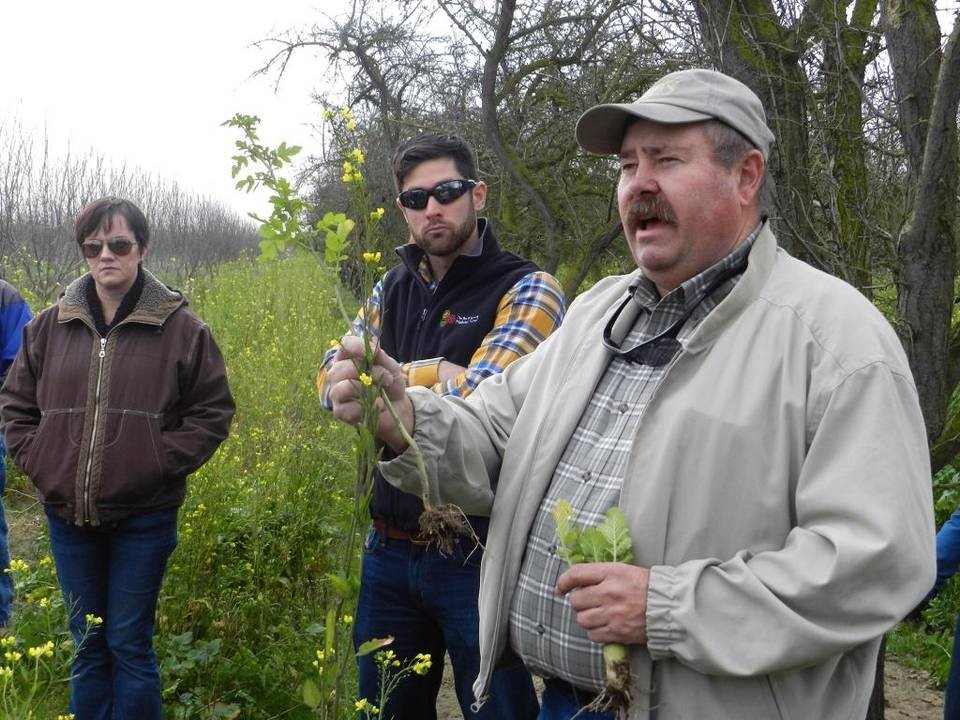 About a month from now, billions of bees will get to work pollinating nearly 1 million acres of California almonds.

On a small part of that acreage, growers are providing other flowers for the bees to dine on before and after the almond bloom. They hope to strengthen the insects against disease and other challenges that have reduced their numbers in recent years.

An orchard east of Livingston provided a glimpse Tuesday of how it works – in this case with yellow mustard and daikon radish sown in the fall. They provide nectar and pollen at a time of year when it is not available on most of the nation’s farmland and wild areas.

“It sustains the bees and boosts their health in myriad ways,” said Billy Synk, who runs a program that offers free seeds to almond growers. They can plant them between the tree rows, at orchard edges and at other spots without reducing their nut yield, he said.

The Almond Board of California, based in Modesto, hosted the demonstration at Jean Okuye’s farm along Olive Avenue. She has 19 of the farm’s roughly 6,000 acres enrolled so far in the Seeds for Bees program.

Almonds are second only to milk for gross income among the state’s farm products. About two-thirds of the nation’s commercial bee colonies are trucked to the Central Valley each year to do the essential task of moving pollen among the blossoms.

Beekeepers expect to lose some of their colonies each winter, but the losses have grown for reasons that are still being studied. They could include disease, parasites, pesticides, the stress from trucking, or poor nutrition when drought reduces flowering plants.

Seeds for Bees this year provided several types of mustard and clover, along with the lana type of vetch. They flower from January, when almond trees are bare, through the end of nut pollination in late March.

The bees gain weight and immunity from disease thanks to the extra food, said Synk, director of pollination programs for Project Apis m. It is named for Apis mellifera, the scientific term for the European honeybee, the species at issue.

The plants add organic matter that improves soil fertility and water retention, Synk said, and they can be mown well in advance of the nut harvest. Almond growers like to minimize the debris that could get picked up with the crop shaken from the trees.

The additional food sources do not appear to keep bees from fully pollinating the trees, said Bob Curtis, director of agricultural affairs at the Almond Board. He added that some beekeepers have discounts for program participants because it reduces the need to feed sugar and other winter supplements to the colonies.

Research suggests mechanical pollination of almonds not worth the costs

Is the mechanical application of pollen a last ditch effort to avert crop disaster or an insurance plan to ensure high nut set?

Is the mechanical application of pollen a last ditch effort to avert crop disaster or an insurance plan to ensure high nut set? The answer depends on the almond grower asked the question.

Insufficient hive numbers or strength, or wet, cold weather conditions during bloom are reasons some growers consider mechanically applying pollen in their orchards.

Fichtner says achieving a higher nut set may not be a good enough reason to supplement bees.

“There are not enough carbs in the tree to support 100 percent set. In commercial orchards with adequate pollination, typical nut set is around 30 percent,” she said.

The timing of the application and pollen quality are two major considerations with mechanically-applied pollen.

There are two different approaches to the application: blowing pollen on trees with a blower or fixed-wing aircraft; or inserts of pollen dispensers into hives.

The first method relies on bee activity to redistribute pollen since only a small amount of blown pollen will be deposited directly on receptive stigmas. Research studies have shown no benefit from this method as a supplement to bee pollination on nut yield when Nonpareil rows are spanned on either side by pollinizer trees.

Fichtner noted another study conducted by Robin Thorp at UC Davis in 1978 that illustrated the benefit of an application of supplemental pollen. However, the study was conducted in an orchard with four solid rows of Nonpareil. This orchard design is no longer utilized in the industry.

Pollen inserts have been found to work in some situations but not in newer plantings. The Journal of Apicultural Research notes that pollen dispensers did not increase fruit set percentage or yield in a 1:1:1 planting design – pollinizer rows planted on either side of the main cultivar rows – with good bloom overlap.

In contrast to bee activity which lasts over the entire bloom period, mechanical pollination is a one-time event and only has the potential to pollinate a fraction of the flowers open at the time of the application.

Fichtner confirmed that the 2014 replicated field trial to determine the potential benefit of mechanical pollination, as a supplement to bee activity, did not significantly affect nut set or yield.

A 2015 trial with the Monterey variety suggested a benefit of mechanical pollination on nut set compared to bee exclusion. The exclusion achieved only a 1.3 percent nut set while mechanical alone resulted in 17 percent set. A combination of bees and mechanically-deposited pollen resulted in a 57 percent set as measured in May.

Fichtner said the potential exists for mechanical pollination to set a small crop in the absence of bees, but the decision might rest more on the economics of the practice. The cost for an application by blower was reported at about $300 per acre in 2016.

There are also practical considerations. Wet conditions that keep bees from working the orchards can also cause access issues for mechanical pollination machinery.

Terra Bella beekeeper Roger Everett noted it is difficult to determine if bee colonies did a good job of pollination until it is almost too late for mechanical supplementation.

He predicted sufficient hive numbers and strength for almond pollination in 2017, but probably not surplus hives. Increase in almond acres has not been offset by orchard removals, he said, keeping hive rental prices steady in recent years.

The current recommendation is for 1.5 colonies per acre although insurance companies may require two colonies per acre. Depending on frame numbers per colony, 2017 hive rental cost is expected in the $170-$200 range.

The 2017 almond bloom period will see increased demand for hives due to the increase in commercial acres. Acre numbers are slightly offset by the removal of older orchards in high water cost areas, said bee broker Joe Traynor of Bakersfield.