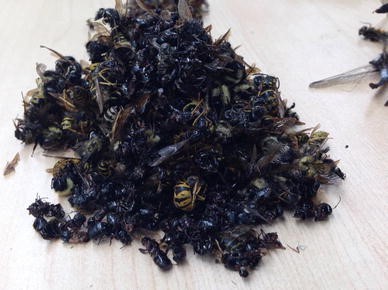 Pollinating insects are vital to the survival of many primary producers in terrestrial ecosystems, as up to 80–85 % of the world’s flowering plants require pollinators for reproduction. Over the last few decades however, numerous pollinating insect populations have declined substantially. The causes of these declines are multifaceted and synergistic, and include pesticides, herbicides, monoculture, urbanization, disease, parasites, and climate change. Here, we present evidence for a generally understudied yet potentially significant source of pollinator mortality, collisions with vehicles. Negative impacts from roads have been observed for the majority of vertebrate groups but studies of the effects on invertebrates have remained largely absent from the scientific literature. We documented road mortality of pollinating insects along a 2 km stretch of highway in Ontario, Canada and used our findings to extrapolate expected levels of road mortality across a number of landscape scales. Our extrapolations demonstrate the potential for loss of hundreds of thousands (on our studied highway) to hundreds of billions (generalised across North America) of Lepidopterans, Hymenopterans and pollinating Dipterans each summer. Our projections of such high levels of annual road mortality highlight the need for research to assess whether the mortality levels observed are contributing to the substantial declines of pollinating insects occurring on a global scale, thus putting the ecological functioning of natural areas and agricultural productivity in jeopardy.

The study site was located within Magnetawan First Nation along a 2-km transect of Highway 69/400, a portion of the Trans-Canada Highway and major thoroughfare connecting central and southern Ontario, Canada. This section of Highway 69 has a maximum speed limit of 90 km/h, and moderate daily traffic flow (averaging 9700 vehicles per day during the summer months; Ministry of Transportation Ontario 2012). The habitat bisected by the highway consists of a continuous natural mosaic of wetland patches separated by upland areas of mixed forest and rock outcrops (i.e., Boreal Shield ecozone), with the only major anthropogenic disturbance in the area being the highway itself. The lack of other anthropogenic structures in the area provided the opportunity to control for other confounding variables associated with urbanization (e.g. habitat degradation, monoculture crops, use of pesticides and herbicides; Kearns 2001; Potts et al. 2010).

Daily walking surveys alongside the northbound and southbound lanes of the highway occurred at 10:00 each morning from 1 May to 31 August of 2012 and 2013 (two active seasons), resulting in 235 transect surveys (Baxter-Gilbert et al. 2015). Surveys were conducted by 2–3 individuals, and occurred daily regardless of weather. All insects found on the road surface (9 m wide), road-adjacent asphalt shoulder (1.5 m wide), and asphalt shoulder-adjacent gravel shoulder (2 m wide) were collected by hand, stored in labelled plastic bags, and frozen for future identification. Collected insects were identified to Order with dichotomous keys (Marshall 2006) and counted at Laurentian University, Sudbury, Ontario. Incomplete specimens (e.g., legs, wings, and body segments) were clustered to represent a single whole specimen whenever possible, to ensure conservative counts were made.

During our surveys, many insects collected exhibited signs of impact trauma, and numerous vehicle-insect collisions were directly observed. The number of insects we collected from the highway after being struck and killed by traffic (N = 117,675 individuals) represented substantial diversity, encompassing 15 Orders. These casualties were predominantly pollinators (96 %), such as bees, wasps, butterfly, moths, and flies. Insects from the Order Hymenoptera comprised 11 % (N = 12,639) of the total, and predominately included yellow-jacket wasps (Vespidae), bumblebees and honeybees. Insects from the Order Lepidoptera comprised 4 % (N = 4763) of the total, and consisted of a wide assortment of local butterfly and moth species. Dipterans made up 81 % (N = 95,094) of the total collected insects, and consisted primarily of horse flies (Tabanidae), blow flies (Calliphoridae), and bibionid flies (Bibionidae). In 2013, there was a substantial bloom of bibionid flies (Bibio sp.) in central Ontario, Canada, which largely contributed to the increased number of Dipterans collected in May 2013 (removing the May 2013 Dipterans the total falls to N = 4378). Though, overall, the general seasonal trends of insect road mortality appeared similar in both sampling year (2012 and 2013;. The remaining 4 % (N = 5179) consisted of insects from the Orders Blattodea, Coleoptera, Dermaptera, Ephemeroptera, Hemiptera, Mantodea, Megaloptera, Neuroptera, Odonata, Orthoptera, Plecoptera, and Trichoptera.

The substantial level of insect road mortality (>117,000 individuals across two active seasons) on only a 2-km section of highway underscores the threat road-networks pose to insect populations. Furthermore, our findings mirror that of Seibert and Conover (1991) who also described the three most common insect Orders killed by traffic as Lepidopterans, Hymenopterans, and Dipterans. Lepidopterans and most Hymenopterans are considered pollinators, and about 32.5 % of Dipterans are pollinators (Larson et al. 2001; Kearns 2001); however, the Dipterans we collected consisted of mostly horse flies (Tabanidae; Larson et al. 2001), blow flies (Calliphoridae; Larson et al. 2001), and bibionid flies (Bibionidae; Free 1993; Fitzgerald 2005; Larson et al. 2001; Woodcock et al. 2014), all of which include known pollinators. Because the three most common Orders of insects killed in our study were pollinators, and because they were killed in high numbers, there is the potential for roads and traffic to be a substantial threat to insect pollinator populations. Furthermore, due to the high level of ecological importance of pollinating insects, the removal of pollinators by road mortality may pose a much larger risk to ecosystem health if these pollinator populations are decreased below a sustainable threshold (Biesmeijer et al. 2006; Potts et al. 2010; Ollerton et al. 2011).

It is important to note that the use of our observed road mortality rates to produce an estimate of widespread pollinator losses is nested in the assumption that our road mortality rates are representative of a broader trend. If we compare the road mortality rates for Lepidopterans between our study and previously reported research, we see the same rate (~10/km/day) as those reported by Yamada et al. (2010) along a coastal road in northern Japan. In contrast, our Lepidopteran road mortality rates were higher than those seen in southern India (0.5–3/km/day; Rao and Girish 2007) and notably lower than those in both central Spain (80/km/day; De la Puente et al. 2008) and southern Poland (47/km/day; Skórka et al. 2013). It is important to note that variation in sampling methods, climate, traffic flow, habitats, and insect diversity and density would create variability among reported averages (Muñoz et al. 2015). Nevertheless, we see that in a global context, the level of road mortality we report for Lepidopterans would be considered low to moderate (Muñoz et al. 2015). It is therefore within reason to make the assumption that the road mortality rates recorded for Dipterans and Hymenopterans could also be considered moderate, and that they follow similar trends described in previous literature (e.g., Seibert and Conover 1991). Furthermore, it is also important to consider that our predicted rates of pollinating insect road mortality may be underestimates, as our sampling method was limited to the road and shoulder. Thus, we did not collect insects that adhered to the vehicle during the collision, any individuals that were scavenged after collision, or were ricocheted far off the road and shoulder after the insect-vehicle collision. As well, our estimates of pollinating insect road mortality rates are based on the number of dead insects collected along a highway with moderate traffic (Ministry of Transportation Ontario 2012) bisecting a boreal habitat with moderate insect diversity (Ricketts et al. 1999). Therefore, the road mortality rates we report should be a suitable approximation for use in landscape scale extrapolation. Overall, because the actual road mortality rate is likely much higher, and our observations are likely underestimates of insect death on roads, our study clearly highlights that road mortality of pollinating insects is occurring at high levels, but whether these levels are extensive enough to cause population declines is yet to be seen, and requires future research.

It is also important to note that as the landscape scale used in our extrapolations became larger and more generalised, the levels of reliability and accuracy of our extrapolation were reduced. Different landscapes will experience variability in factors effecting road mortality rates. Certainly, the estimate of the seasonal expected level of road mortality along Highway 69/400 is likely quite reliable and accurate, as the amount of traffic, road size, speed limit, habitat, climate, insect diversity, and road side vegetation are generally similar along the road’s entirety (Skórka et al. 2015). The level of predicted road mortality likely became less accurate and reliable as the landscape scale was increased to geo-regional, eco-regional, and continental landscape scales as variation in the aforementioned variables (Skórka et al. 2015) becomes larger. With this in mind, it is clear that our predictions of the annual loss of hundreds of billions of pollinating insect across North America do rest in the notable assumption that our reported road mortality rates represent a North American average. Yet, it is important to consider the reality that our predictions may be relatively accurate, and if this is the case much more research on the impact roads may be having on pollinator population is crucial.

Counterintuitively, there have been a number of studies that demonstrate that insect populations can benefit from anthropogenic disturbance and habitats (Bolger et al. 2000; Threlfall et al. 2012), however much more research is required to understand if beneficial roadside vegetation (Munguira and Thomas 1992) can outweigh costs of road mortality (Muñoz et al. 2015). Research into the population viability of pollinating insects when considering various levels of road mortality is an important next step in understanding whether the levels of road mortality being recorded at our site, and the expected levels across larger landscape scales, present significant threats to global pollinator populations. It is worth consideration that all the cumulative effects of currently established causes of pollinator population declines (e.g., pesticides, habitat destruction, monoculture, urbanization, emerging disease, parasites, and climate change; Brown and Paxton 2009; Cane and Tepedino 2001; Cameron et al. 2011; Khoury et al. 2011; Wallis de Vries et al. 2012; Paxton et al. 2015) coupled with a major annual population loss due to road mortality may potentially represent a serious threat; if not now then in the future as road networks expand and traffic densities increase (Dulac 2013).

Unlike some of the threats that can be regulated (e.g., use of harmful pesticides; Rundlöf et al. 2015), design of mitigation to reduce road mortality of pollinating insects is not as clear. Mitigating the threat of road mortality to flying insects is clearly a more difficult task than mitigating roads for other larger taxa (e.g., ecopassages and fences; Lesbarrères and Fahrig 2012). This has already been recognized for the very specific situation of the Alkali Bee (Nomia melanderi), a species that is the most efficient pollinator of alfalfa crops in Washington, United States (Vinchesi 2013), and whose low-flying nature puts it at great risk in populations that are bisected by roads (Vinchesi 2013). In an attempt to reduce the negative effect of road mortality on Alkali Bees, tall screens were placed adjacent to roads which forced bees to fly at an increased height. Unfortunately, this method was found to be ineffective as after the bees manoeuvred over the screen, they reverted back to their initial, and risky, low-flying height to cross the road (Vinchesi 2013). Although not effective for Alkali Bees, the use of tall screens has been effective for Hine’s emerald dragonflies (Somatochlora hineana) on simulated small roads (6 m wide), but was not effective for large simulated roads (12 m wide; Furness and Soluk 2015). Ultimately, we can see that much like mitigating roadways for other taxa (Lesbarrères and Fahrig 2012), creating an effective means of preventing insect road mortality requires a great deal of further research, and likely a host of species-specific adjustments and modifications from the current screening method being tested.