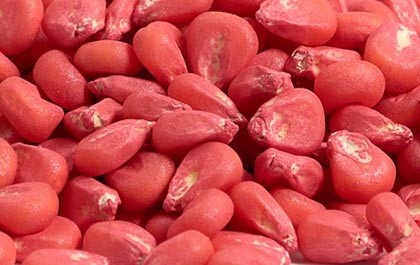 Should seeds coated with neonicotinoids be regulated as pesticides under the Federal Insecticide, Fungicide, and Rodenticide Act (FIFRA)? The answer to that question, which is at the heart of a lawsuit in federal court in San Francisco, could have huge implications for farmers, who plant neonic-coated seeds on about 142 million acres.

On one side of the dispute are the plaintiffs – individual beekeepers, the Pollinator Stewardship Council, American Bird Conservancy, and more. Bill Ahaus of the Idaho Honey Industry Association gives his perspective for this side: “What they’re finding is that there are very high levels of these neonicotinoids that are in the bee’s wax. They’re absorbed into the bee’s wax and what happens is that non-toxic chemical builds up in the hive to the point where the concentration is high enough to actually, if not kill them outright, at least weaken their immune systems so they fall prey to viruses.”

On the other side are the Environmental Protection Agency and associations representing seed manufacturers, ag retailers, and corn, soybean, cotton and wheat growers.

The parties filed briefs summarizing their arguments for U.S. District Judge William H. Alsup, who has scheduled a hearing for Oct. 27. At issue is an EPA guidance issued in 2013 for evaluating alleged cases of pesticide-related bee deaths and other incidents. The guidance said that planting neonic-coated seeds is not considered a “pesticide use.” Instead, EPA said the seeds can be considered “treated articles” that are exempt from FIFRA regulation.

“The difference is significant, both legally and practically,” the plaintiffs said. “There is a substantial difference between pesticidal effect that is limited to the seed itself and pesticidal effect that extends beyond the seed, whether to the future full plant (through the systemic nature of the neonicotinoid pesticides) or to surrounding air, soil, water, plants, and numerous non-target invertebrates, including valuable pollinators, as well as to birds.”

In May, Alsup denied the government’s request to dismiss the case, saying that “if the 2013 guidance did consummate a new rule, and thus a final agency action, then defendants clearly violated federal law by failing to comply with rulemaking requirements.”

If neonic-coated seeds were considered pesticides, the plaintiffs said EPA would have to conduct a full review of their environmental effects, which could include the impact on federally listed species. “It is clear from FIFRA’s language and legislative history that Congress did not intend to allow EPA to wholesale exempt a broad class of pesticides from registration, particularly where those pesticides have unreasonable adverse effects on the environment,” the plaintiffs said, alleging that as neonic-coated seeds began to be widely used in the mid-2000s, “commercial beekeepers and honey producers throughout the United States started experiencing high death rates of their bees.”

“Many beekeepers directly observed toxic dust clouds billowing from seed planting machines, spreading the insecticides far from where the seeds were planted, to neighboring farms, marginal vegetation visited by their bees, waterways, and even directly to their beehives,” the plaintiffs said in their brief, which was filed Sept. 16 (the same day EPA and the industry groups filed their briefs).

The plaintiffs point to a 2003 EPA fact sheet for the neonic clothianidin that says it “has the potential for toxic chronic exposure to honey bees, as well as other nontarget pollinators.” Agricultural researchers estimate that one of every three mouthfuls of food consumed by Americans directly or indirectly depends on pollination by honey bees, and bee pollination alone adds about $15 billion in value to agricultural crops each year in the United States.

But the effects of neonics, when used as seed coatings or in field application, are vigorously disputed. The industry intervenors said in their brief that all neonicotinoid pesticide products and their individual uses as seed treatments “have cleared EPA’s robust, science-based registration process under FIFRA and have been found to “perform (their) intended function without unreasonable adverse effects on the environment,” as defined by FIFRA.

EPA acknowledges in its brief that bee populations have been declining, but says the causes “are the result of a complex set of interacting stressors.”

“The primary stressors believed to impact Colony Collapse Disorder and the broader declines in honey bee health are poor nutrition (due in part to decreased availability of high-quality forage lands), exposure to pests such asVarroa mites, disease (viral, bacterial, and fungal), bee biology, genetics, and breeding, and exposure to pesticides and other environmental toxins,” the agency’s brief says.