There was a time when Kerry Owen didn’t know how he was going to pay his bills. He had dabbled in beekeeping as a hobby while working at a Greenville radio station. It wasn’t until ownership changes at the station led to him losing his job that he decided to pursue beekeeping as a full-time profession.

The recently named 2016 S.C. Farmer of the Year counted on those early sales of his honey to make ends meet, saying “the small stands and such paid my house payment.”

Owen and his wife Donna are the founders and owners of Bee Well Honey and Bee Supply in Pickens. In addition to the Bee Well store at 205 Hampton Avenue in Pickens, the company’s products can be found online and in stores across the Southeast. 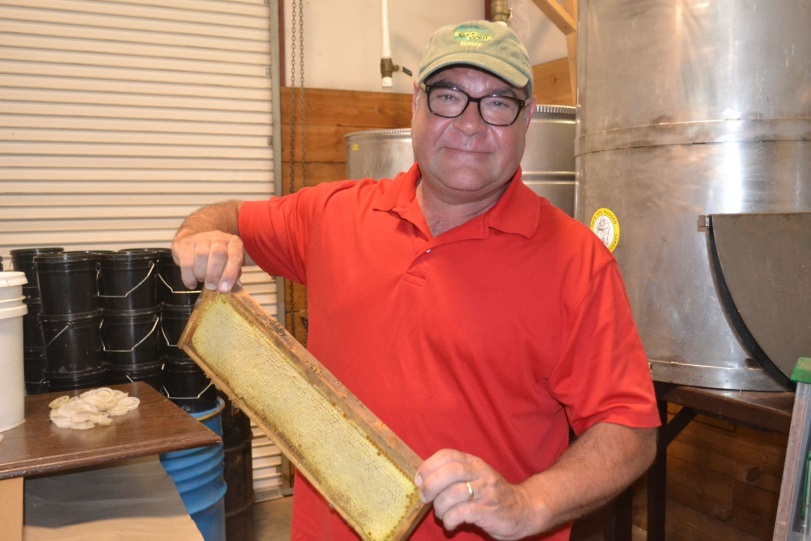 “We sell to all of the Whole Foods stores in the Southeast, to all of the Bi-Lo stores, all of the Mast General stores and Quality Foods,” Owen said. “And we just got approved for Piggly Wiggly and Food Lion.”

The growth of Bee Well Honey hasn’t stopped Owen from taking care of his original customers.

“We still drive to Abbeville and drop off one case of pints to the man at the liquor store, while at the same time, at our distribution facility, we’re rolling out pallets of honey to UPS going to Atlanta and places like that,” Owen said. “For me to drive to Abbeville to drop off a case of honey, by the time I count time, gas, and profit on the case, I’m not making money on it. But they like our product and want it.”

Owen remembers his first customer … which just so happens to still be a customer.

“I picked up my very first customer when I was making a commercial for Garner’s Natural Market in Greenville,” he said. “I mentioned I had honey bees and they asked if I would sell them some honey. I said ‘Sure.’”

After that, Owen started “selling honey off the corner of my desk at work. People would just come by.”

He contacted Clemson University for guidance in starting up beekeeping as a fulltime profession. He discovered no one in the area was managing honey bees on a large scale.

In addition to the bottles and jars of honey he sells, Owen’s Bee Well Honey provides free pollination services.

“Every vegetable, fruit and flower has to have pollination, and a lot them are not wind pollinated, they have to have some time of a host,” Owen said. “A honey bee can fly from flower to flower and do the pollination.”

Bee pollination provides higher yields for farmers, “so we will go and unload a load of honey bees.”

White it is a rewarding job, Owen said it’s also a hard job. The bees can fall victim to disease, the weather and the Varroa destructor – a mite that gets on a bee and inside the cell where babies are formed. When the mite population gets up to a certain level, the colony collapses.

“Every beekeeper experiences loss. There have been many times that I would be in a bad mood because my bees looked great a month ago and today they’re dead,” he said. “Every spring we spend a large amount of time and money trying to fix the dead hives, just so we’ll be ready for the honey flow.”

As for any weather impacts, Owen said it is always hard to predict. He said “sometimes too much rain is not good but then too much drought is not good, so finding a happy medium is hard to do.” He said he lost 169 hives in North Carolina one time to a flood, and last year a bear destroyed 227 of his hives.

“Kerry is the first beekeeper to be nominated for this award,” Craig said in a statement from Clemson. “This is new terrain in the South Carolina agricultural industry. It shows just how much agricultural diversity we have here in our small state. We are very proud of him.”

There are about 2,500 beekeepers who manage about 30,000 bee colonies in South Carolina, according to Clemson.

Owen will be recognized later this year during the Sunbelt Expo.