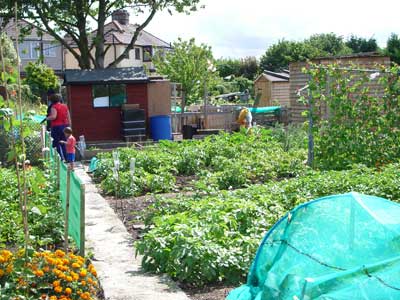 With the help of local beekeepers, Vita (Europe) Ltd has opened a test apiary near its Basingstoke headquarters to complement its other test apiaries across the world.

The apiary, on a large allotment (community garden plots for fruit and vegetables) within easy foraging distance of Vita’s offices, will be managed by some beekeepers from Basingstoke and Paulo Mielgo, Vita’s technical manager.

The Basingstoke beekeepers, who are experienced in allotment beekeeping, have constructed an apiary perimeter fence, for security and to ensure that the bees fly well above head height on foraging trips, as well as a small apiary shed to hold beekeeping essentials.

“Derek Western and Paul Rogers of Basingstoke have done a great job in preparing the apiary, fencing, shed, hives and drawing up an agreement with the local council,” said Paulo Mielgo. “I carried out my first inspection last week and, although the colonies are still quite small, they seem to be healthy.”

For Mielgo, having been born into a beekeeping family in Argentina, there are at least two unusual elements to the apiary. The colonies are in National hives – the traditional and most popular hive in Britain – rather than the Langstroth hives with which he is most familiar. Secondly, the apiary is in an urban area, a location rarely used for beekeeping in Argentina.

“I’m not yet certain how many colonies the local forage can support, but we hope to grow to the classic test apiary size of 21 colonies – three groups of seven colonies each,” said Mielgo. “With more than 100 allotment plots just outside the apiary fence, lots of city gardens, and farmland within two kilometres, the foraging potential looks good. The summer flow this year should help to confirm the optimal size.”

Sebastian Owen, Vita’s business development manager who began the apiary initiative, said “We have wanted a local apiary for some time and are very grateful with the support from local beekeepers who have been key in making this happen.

“Fittingly, the apiary is within foraging distance of the seventeenth century apiary of the Rev Charles Butler, the author of The Feminine Monarchie, the beekeeping book that revealed to the world the science that honeybee colonies are headed by queens and not kings.”

The tests and trials to be undertaken, including Asian hornet protection and nutrition supplements, will complement studies managed on behalf of Vita in other parts of Europe and South America.