Beekeeping is one of the oldest forms of food production dating as far back as 13,000 BC.

Human cultures were initially hunters/gathers, which included hunting of wild nests for honey and beeswax. Some human cultures continue such traditions today, such as the harvesting of Apis dorsata nests in the mountains of  Nepal and the native honey hunters of the Sundarban mangroves of India/Bangeldesh (both highly dangerous – sheer cliffs of Nepal and man-eating Tigers that rule the Sundarbans). Mike Burgett, in an interview by M.E.A. McNeil, Dec. 2014 Bee Culture describes the dangers to the Sundarban honey hunters. https://www.beeculture.com/mike-burgett-interview/ 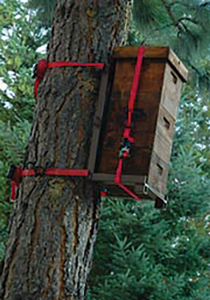 The history of humans bringing bees closer to their residences is not well documented. Most farmers kept other livestock and grew crops and keeping bees was only part of their husbandry/agriculture. Generally the beginning of “domestication” of honey bees by middle eastern cultures is cited as around from 10,000 to 4400 years ago.

With Reverend Langstroth’s development of the movable comb hive (1851), German Johannes Mehring’s refinement of comb foundation (1857), plus the honey extractor (von Hruschka 1864/1865 – see article by Wyatt Mangum in Sept 2016 ABJ), it became easier to keep honey bees at the convenience of the beekeeper. Prior to this, bees were often “kept” where they were found, in their selected cavities and individuals obtained their honey and beeswax via destruct harvest.

Thus a large history of humans and bees involves keeping bees in bee trees. Today we use the phrase ‘keep the bees out of the trees’ to signify control of swarming. Bees in tree hives are likely to swarm more frequently. When we maintain our bees in modern hives, we recommend keeping bees out of the trees. But swarming, basic bee reproduction of their colony unit, remains an integral part of what makes a bee a bee.

Langstroth wrote about tree hives in his book The hive and the honey bee: “The Russian and Polish beekeepers…are among the largest and most successful cultivators of bees, many of them numbering their colonies by hundreds, and some even by thousands!  They have, with great practical sagacity, imitated as closely as possible the conditions under which bees are found to flourish so admirably in a state of nature.” 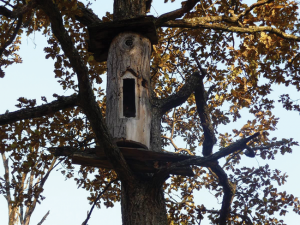 Tree hollows are typically much thicker than a standard beehive, and as such, better able to handle the extremes of heat and cold. Bees in tree hollows do not normally construct their parallel combs to the bottom of the cavity so a debris area forms at the base of the hollow. It remains moist and comprised of organic nutrients, saw dust and living organisms. Within this micro-ecosystem, there are beneficial predators and microorganisms (viruses, bacteria, wax moths, etc) that may help the bees remain healthy. Since many of the cavities bees selected were small the bees often swarmed, which is their way of reproducing and also for “solving” issues like American foulbrood and bee mites.

Currently Tom Seeley, studying bees living in hollows of tree in the Arnot Teaching and Research Forest, at Cornell, (see Bee Culture, Nov 2016 www.beeculture.com/tom-seeley/), the ONE place in Europe and North America with data on wild colony abundance before & after arrival of Varroa [Before (1978): 2.5 colonies per square mile, After (2002):2.5 colonies per square mile] has suggested an Environment of Evolutionary Adaptness (EEA) beekeeping management approach (also termed Darwinian Beekeeping, Apic-centric beekeeping or “natural” beekeeping). See Tom’s presentation on this concept at 2017 EAS University of Delaware meeting: https://www.easternapiculture.org/images/stories/extentions/DarwinianBeekeeping-EAS17.pdf 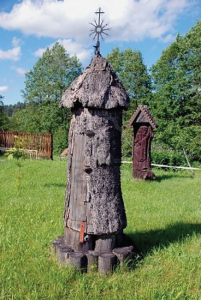 Some key managements to “natural” Langstroth hive beekeeping, based on what he finds common to bees living in trees, are:

Original man-made bee hives were small. The original Lansgstroth hive had a “garbage pit built into an incline beneath the hive. With some studies it was found that if European (Italian) bees were kept in larger boxes they would produce more honey. German bees in Europe remained in smaller boxes. Along with management systems recommending a 2nd brood box for Italian bees, cell size of commercial foundations were increased to produce bigger bees. But still today beekeepers keep bees in bee trees.

Forest beekeeping of Poland and Belarus has been nominated for listing as a UNESCO Intangible Cultural Heritage of Humanity. It already has the status of a historical and cultural value in Belarus where this ancient tradition of keeping bees in artificially-made caverns placed high in the trees, going back to 5th-6th centuries, survives until today. In Poland, although the tradition was interrupted, it is being restored. 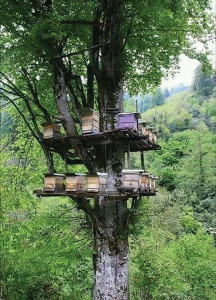 A picture is worth a thousand words! Here is a picture – from web source Pinterest (and most recently seen in Cowlitz WA Beekeeping newsletter) – that may have a 1000 questions! To begin with like Why? Why two levels? What is problem this is attempting to solve? How does the beekeeper access? What happens when you drop your hive tool? etc. For more photos of “natural” hives check out https://www.pinterest.es/pin/115897390382664942/

Lynn Royce, retired OSU Entomologist and bee specialist, has an interesting Bee tree project. (http://treehivebees.org/) The Tree Hive is a movable frame Langstroth-type bee hive mounted to a tree on a metal stand, eight to 10 feet above the ground. The lower portion includes a “bio chamber” with decaying wood chips for organisms that would also live in a hollow with the honey bees. The bees use top and bottom entrances in Summer but the top entrance is closed in
Winter.

With this project Lynn is showing that the combination of hive placement, box design, and bio chamber provides a system that is good for the bees. In a March 2015 Bee Culture article Lynn wrote that Bee bread from tree colonies had approximately twice the amount of fungi, Aspergillus/Penicillium, and A. niger, as ground colonies (due to undetermined factors). A total fungus inoculum of all culturable fungi slowed or inhibited growth of chalkbrood fungus Ascosphaera apis in laboratory cultures, thus confirming the beneficial role of these fungi. This suggests that bee bread fungi from tree colonies are more efficient at handling chalkbrood. See full article https://www.beeculture.com/tree-hive-colonies/