This article continues the series on herbs in the carrot/parsley family. Nearly 10 or so of these species are attractive to bees since they’re especially rich sources of nectar and pollen. This time, we’ll be considering dill, anise, and lovage.

Originally native to Russia, the Middle East, and western Asia, dill was introduced to Europe where it naturalized. This herb is most popular in Eastern Europe, Poland, Scandinavia, and Russia. The common name apparently comes from an old Norse or Saxon word “Dillan,” which means “to lull.” This is in reference to the plant’s traditional use to pacify crying babies and treat colic.

Dill was introduced commercially to North America later than the other European herbs. This bee plant brings both pollen and nectar.

Although dill is a biennial, it is mostly grown as a hardy annual. The slender stemmed species is typically two to three feet in height, but can occasionally be shorter. It resembles fennel.

The small, pale green, delicate, feathery leaves are three to four times divided with finely cut, thread-like segments. These have a delicate fragrance. Flowering typically begins in the second year during mid-Summer. However, if it is planted early enough in the season, dill can bloom the first year. 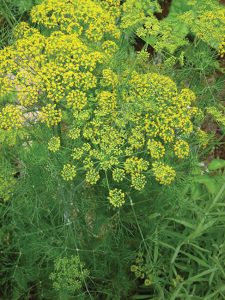 Easy to grow from seed, this herb self sows. Equally tolerant of heat and cold, it generally prefers full sun. However, dill does reasonably well in light shade. If possible, give this plant a protected spot for the stems tend to fall over in windy areas.

Space dill plants a foot apart with rows being two to three feet apart. The seeds can be stored for several years.  When planting dill, leave these seeds uncovered. They sprout in about two weeks.

Dill can be direct sown or started indoors in peat pots. Direct sow seeds as soon as the ground can be worked in the Spring.

Transplant those started in pots once the soil has warmed. Avoid disturbing the roots during this process. Water as needed to keep the soil moist.

This herb can cross pollinate with fennel. For that reason, dill seed shouldn’t be saved for planting if this herb grows near fennel. A large number of dill varieties are available to home gardeners.

For bee gardens, the quick blooming dill varieties are most suitable. Ones that are recommended include the following.

Bouquet dill is considered to be the very best choice for those planning to harvest dill seed. A very well known variety, the bushy, dwarf compact plant is generally two feet tall. However, it has been known to reach a little over three feet.

This variety bears greenish-blue foliage on slender stems. Bouquet dill is one of the earliest blooming varieties, bearing a crop of seeds 85 to 105 days or so from planting time. Typically, flowering lasts for several months. The blooms are yellow.

Less leafy than most dill varieties, Long Mammoth dill is one of the best for seed production. The yellow blooms begin opening in July.

Dukat dill is another favorite among gardeners. The vigorous, very leafy plant is particularly rich in essential oils. Quite finely cut, the foliage is greenish-blue with a mild flavor. Typically 1½ to two feet in height, these plants can sometimes grow to three feet or more. This variety bears flower heads that are 10 inches across.

In addition to Dukat dill, an improved form called Super Dukat dill is also available. This variety is a great choice for bee gardens. Originating in Sweden, it is particularly rich in essential oil when compared to other dills.

Super Dukat dill is usually 1½ to three feet in height, although occasionally this has reached five feet. The plants mostly begin flowering from mid- Summer onward. Bearing seed heads that are uniform in height, these are ready for harvest about 90 to 110 days from the time the seeds are sown.

Fernleaf dill is a highly popular, unique, compact, dwarf dill. It grows to a little over 1½ feet in height and is almost equally wide. This variety is very suited to small gardens and containers. The branches arise at the base of the very ornamental plants.

Fernleaf dill was named as an All-America Selections winner when it was introduced some years ago. It is best suited to areas with long growing seasons since the plant tends to bloom a little later than some varieties. This dill is named for the very finely cut fern-like foliage. Seeds are typically ready to harvest about 95 to 115 days from planting time.

In ancient times, dill served various medicinal purposes. The ancient Romans included this herb in wreaths to honor Bacchus. It also showed up in their herbal remedies as well. They added dill leaves to cheese, soups, meats, and peas.

During the medieval era, people considered this to be a magical plant that could protect them from witches. At the same time, dill appeared in love potions.

This plant tastes somewhat like fennel. The flavor has been described as strong and warm. Generally, cooks now prefer fresh dill leaves rather than the dried.

The fresh and dried leaves are used to flavor fish, eggs, salads, vegetables, cottage cheese, potato salad, sauces, dumplings, mushrooms, sour cream, cakes, and other desserts. Both the leaves and seeds can be used as a flavoring, although the seeds are stronger tasting. The latter is equally good fresh or dried and are widely used in pickles and dill vinegar. 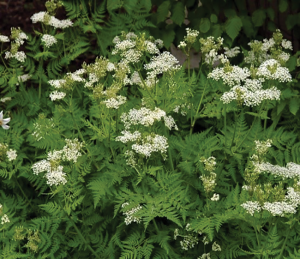 This plant is also called aniseed. Originally native to Egypt where it was first cultivated, anise was later introduced to Arabia. The plant is mentioned in the Bible.

Historians disagree as to whether the plant was native to Europe or was introduced. Some sources credit the Romans with bringing this plant to the continent.

The plant was highly popular among the ancient Greeks and Romans. The latter used it to pay their taxes and as a flavoring for cakes. In Greece, it was widely used to flavor ouzo.

King Edward I placed an import tax on anise seed. Once anise was introduced to America, the plant naturalized in Michigan and Massachusetts.

An individual anise flower can provide from 0.05 to 0.08 mg of nectar daily. This herb has been known to yield a crop of surplus honey, especially in California, with over a hundred pounds per colony. Anise is also a source of pollen.

This popular herb reaches 1½ to two feet in height. A sprawling, spreading annual, it features a rather weak stem that can be damaged by heavy winds. The dainty, lace-like, scented, broad, small leaves are deeply notched.

This plant bears large, crowded flower heads in early Summer. The blossoms are whitish-yellow to cream. The very small, hairy seeds are pale brown or brownish-gray.

Grown from seed, anise is suitable for all zones. This sun loving, heat tolerant plant withstands light frost. It prefers a light, sandy, rich, well drained soil with a pH of 6.0 to 7.

Sow anise seeds 1/8 inch deep. These don’t store well.  When planting early indoors, use peat pots to minimize damage to the roots when the young plants are later transferred to the garden.

Anise can be direct sown once the danger of frost is past. Plants should be spaced 1½ feet apart in the garden.

Allow the soil to dry out slightly before watering anise. Although the plant experiences few insect problems, it is sometimes attacked by leaf spot and rust.

This plant is used as a flavoring. The taste is somewhat reminiscent of fennel, but is more delicate with hints of sweetness and spice. Anise is added to Italian sausage, candy, bread, cakes, cookies, soups, drinks, salads, and liqueurs. This is also used to flavor medicines.

Fresh anise leaves serve as a flavoring for meats and curries, and are made into tea. They can be harvested throughout the Summer. Sometimes, the foliage is dried for culinary purposes.

Anise blossoms are dried and ground and used as a flavoring for vermouth and certain types of wines.

The seeds are used to flavor foods. Their taste is similar to that of licorice. Strangely enough, dogs reportedly love anise, especially the seeds. 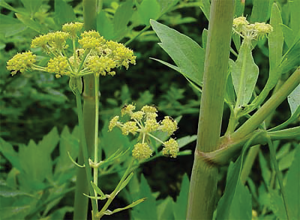 The herb was very popular among the ancient Greeks and Romans as an herbal remedy. It also showed up in their love potions. The Romans were responsible for introducing the plant to England where it naturalized.

Lovage appeared on the lists of approved plants for Charlemagne’s estates during the ninth century A.D. The plant was used widely during the Middle Ages and Renaissance for medicinal purposes. Certain magical powers were attributed to this plant.

This vigorous, stout perennial can be quite tall – from four to seven feet with a spread of two to three feet. This features erect, ribbed, hollow, fluted stems that divide at the top to produce a whorl of branches. The plant becomes larger every year until it reaches maturity at about four to five years of age.

Growing from a thick root, this is considered to be a very beautiful herb. It resembles angelica. The alternate, dark green, deeply divided, large, glossy leaves look much like those of carrots and celery. The flat, coarsely toothed leaf segments are broadly wedge shaped.

Lovage flowers appear from May to July. These can be greenish-white, yellow, or yellow-green. They’re overflowing with nectar. The blossoms form four-inch-wide umbels. Bees are quite fond of lovage flowers, which are sources of nectar and pollen.

The seed heads split open when the seeds are ripe. The oval, aromatic, brownish-yellow seeds are 1/3 inch in length.

Easy to grow, lovage is one of those largely neglected, old-fashioned garden plants that have fallen by the wayside in the 21st century. This is a pity, since this perennial is especially suited to permaculture plantings. Adapted to sun and partial shade, the plant prefers a moist, rich soil. It is hardy in zones four and higher.

Both seeds and plants are available from various sources. This very care free plant is easy to grow from seed. Fresh seeds have a higher germination rate.

These sprout in about ten to 14 days. Plant them in Autumn as soon as the seeds ripen or in the Spring. Space the plants several feet apart.

Lovage can also be divided in the Spring when the plants are three to five years old. Sometimes, this herb can be attacked by aphids and leaf miners.

In ancient times, the Greeks and Romans used lovage for culinary purposes as a seasoning, especially in salads. For Roman cooks, the seeds served as a substitute for black pepper.

This herb was widely used for cordials and beer until the early 19th century. Over time, it became less popular. The blanched stems and blanched leafstalks can be used much like asparagus.

The roots, leaves, lower stems, stalks, and seeds serve as a flavoring for salads and cooked dishes. These are also added to mayonnaise, soup, sauces, and cheese. All parts of the plant have been used as a vegetable and as a flavoring.

Connie Krochmal lives and writes about plants from her home in Kentucky.