You have read his books: Honeybee Ecology (1985), The Wisdom of the Hive (1996), and Honeybee Democracy (2010). You have attended beekeeper meetings and heard him speak. All who have read and all who have heard agree that Thomas D. Seeley is an outstanding researcher into the behavior and social life of honey bees.

Today he is the Horace White Professor in Biology, in the Department of Neurobiology and Behavior at Cornell University, Ithaca, NY. However his research takes him into the Dyce Lab for Honey Bee Studies at Cornell, into the Arnot Teaching and Research Forest nearby with bees nesting in trees, and out to the poison ivy infested Appledore Island off the coast of Maine where his honey bees can be studied in isolation. 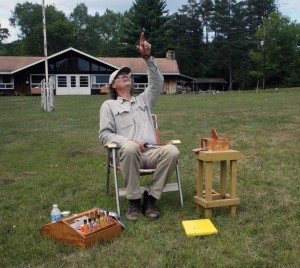 The behavior of honey bees, a social insect, has interested him practically all his life. When he was in third grade a classmate’s father, a beekeeper, brought an unoccupied Langstroth hive for the students to see. Tom was fascinated by how the hive housed a colony of bees. Comb honey was brought for taste samples. He was amazed that insects could make such a beautiful and delicious food. His amazement persists to this day.

That introduction to bees led Tom to become a beekeeper while he was in 11th grade. His first colony was a swarm he collected in a homemade wooden box. Beekeeping fit quite well with his other outdoor interests at home in Ithaca, NY – insect collecting, keeping pet raccoons, bicycling, and making model airplanes. Then it was off to college.

Tom went to Dartmouth for his undergraduate degree in chemistry. Here he also started receiving awards for his accomplishments. Awards and honors have been and are a continuing part of his research work. That chemistry major was supposed to lead to becoming a physician. But he realized that studying honey bees and their lives was more fascinating to him than studying medicine.

While he was studying at Dartmouth, he returned home to Ithaca every Summer to work at the Dyce Lab. Work, at the beginning, meant all the less-than-exciting tasks of keeping bees. He was assigned to repairing the hives and whatever other unchallenging work needed to be done. However he did move upward and began helping the graduate students with their research. After that he was able to work on his own research projects.

For his first one he chose to study the regulation of carbon dioxide in the colony. Just as humans produce carbon dioxide inside their bodies from the metabolism of food, honey bee colonies produce metabolic carbon dioxide inside their nests. Tom’s thought, his hypothesis, was that as the numbers of bees in a colony increased, more carbon dioxide would be produced and this excess would result in swarming. Well, that is not what he found. Instead he found that the bees limit the buildup of carbon dioxide by ventilating their nest. The important lesson that he learned from this first investigation was that a beautiful idea can be completely wrong. The message: pay attention to what your data are telling you. An important lesson for every good scientist.

This research gave him his first publication in 1974, the year he graduated from Dartmouth. The paper: Seeley, T.D. 1974. Atmospheric carbon dioxide regulation in honey bee (Apis mellifera) colonies. Journal of Insect Physiology 20:2301-2305. That first one was followed by 176 more articles, several of which are in press.

If you read through the titles of all those articles you will see that Tom’s research focus is the social behavior of honey bees. How does a colony of thousands of bees function? Swarming – how does it start; how is it organized? How do bees choose a home? How do bees in the wild, in hollow trees, live and survive even today with all the problems lurking around? Foraging behavior and dance language. How do bees make decisions? Beekeepers can also find his articles in Bee Culture and in several other magazines. It is not surprising that today he teaches courses in animal behavior, animal cognition, and animal communication at Cornell.

After graduating from Dartmouth Tom chose to do his graduate PhD studies at Harvard from 1974-1978 under thesis advisors Bert Hölldobler and Edward O. Wilson, two very famous researchers of ants. However, Tom’s PhD thesis research was done on honey bees back at the Dyce Lab where he was advised informally by Dr. Roger A. Morse, professor in apiculture at Cornell. Tom remains deeply grateful to Dr. Morse for letting him work out of the Dyce Lab for his PhD work. You may recognize some of Tom’s PhD classmates there: Kirk Visscher, David DeJong, Rick Fell and Michael Burgett. After receiving his PhD, Tom stayed at Harvard for his postdoctoral studies until 1980. During this time his research took him to Thailand where he studied the Asian species of honey bees and their different strategies of colony defense. He then joined the faculty of the Biology Department at Yale until 1986, when he moved to Cornell.

In 2001 he went to the University of Würzburg, Germany, to write a biography of Martin Lindauer who had been a student of Karl von Frisch as well as an eminent bee researcher in the field of bee behavior and communication. Lindauer’s work during the 20th century certainly gave valuable information for those studying bee behavior. Tom returned to Würzburg in 2002 and 2003 to study the sound signals made by bees during swarming. He also investigated whether plastic foundation, now used in many hives, interferes with waggle dance communication – he found it does not.

It can be difficult to find bee trees in a forest. In times past eager beekeepers used a method called bee hunting (aka ‘bee-lining’) to follow the bees to their forest homes. A beekeeper uses a type of capture box to catch a bee then releases it and follows it to its tree. Tom found this practice an excellent way to find wild colonies of bees in the Arnot Forest of Cornell University, allowing him to study whether these colonies survived the arrival of Varroa and how they have done so. Their survival is valuable in understanding the health problems of bees living in apiaries. Several of his published papers reflect his skill in bee hunting. More about this technique later in this article.

Tom has been showered with awards and honors, invitations to deliver named Lectures, elected a Fellow of several societies, and chosen to deliver Keynote Addresses. The Eastern Apicultural Society (USA) awarded him their highest honor, the Hambleton Award. He has spoken at beekeeper meetings in the British Isles, Scandinavian countries, Europe and Japan and, of course throughout the USA. Tom has had a bee species named after him. This bee, Neocorynurella seeleyi Engel & Klein, is a sweat bee living in the high mountains of Colombia and Venezuela. (Klein is Barret Klein one of Tom’s students.)

He began writing his book, The Wisdom of the Hive, in 1992 at a farm in Maine. However he finished it in 1993 while he had a Fellowship at the Institute for Advanced Study in Berlin Germany. This book won a gold medal in 1998 at the Apimondia Congress. Tom took a sabbatical leave in 2008 to write Honeybee Democracy at his camp in Pembroke Maine. This wonderful book contains results of his research into how a honey bee swarm chooses its new home.

Soon it will be 2016. Keep your eyes open for Tom Seeley’s newest book, Following the Wild Bees. The Craft and Science of Bee Hunting. Princeton University Press, due out in April. (I hear it has wonderful photographs!)

Do honey bees occupy every corner of his life? Definitely not. He has a wife, Robin, and two adult daughters. He is a beekeeper with a couple of hives kept at his place in Pembroke, Maine. Here he can harvest honey, ‘clean and delicious and beautiful,’ made by his own bees. In Ithaca he owns a 101-acre hardwood forest with a conservation easement donated to the local land trust so that it will always be a forest, not subject to the ravages of being developed. Half of this forest is managed for timber and also for maple syrup production. The other half of the forest, not for harvesting, will slowly become an old-growth forest.

The timber half is part of Tom’s enjoyment of hard physical work, needed as a relief from deskwork. He taps the maple trees and makes the syrup. He cuts timber to thin the forest. He cuts and splits four to five cords of firewood every year for heating their house.

Some people have a hobby of collecting a particular thing. Because he loves old John Deere tractors, vintage 1950s-1960s, he has so far collected two. However, to help with his ‘woodswork’ in the forest he has a newer one, a 2006 Model 4410, 4WD.

You can bet he knows where the bee trees are in his woods!