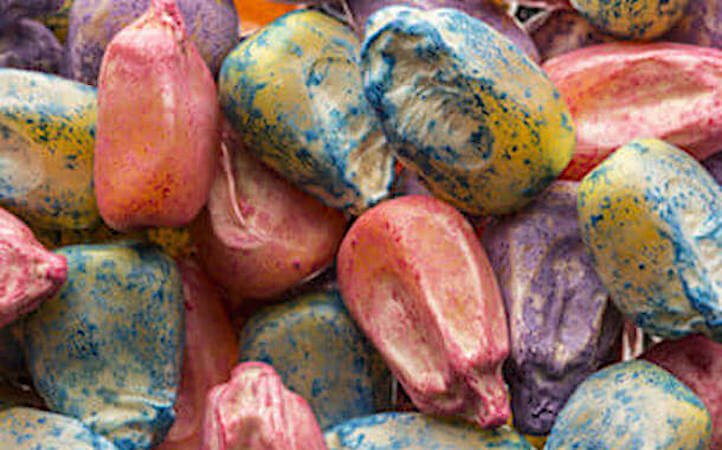 Neonicotinoids, the world’s most popular class of insecticides, have been making headlines for the last decade due to concerns that they negatively impact bees. Now, a new debate has emerged in the fight over their use, pitting university entomologists against agricultural economists, the EPA against the USDA, and pesticide manufacturers against environmental activists. Farmers, as usual, are caught in the middle, trying to figure out how the conflicting narratives will impact them.

The question at hand: Do neonicotinoid seed treatments increase yields? If not, as some claim, reducing or eliminating their use in order to ease a potential stressor on bee colony health could be an easier decision for growers.

Nearly all corn and a majority of soybean seeds sold in the United States are coated with neonicotinoids, or “neonics”. Their main purpose is to fend off below-ground pests while the seeds are germinating, with the hope that the plant also absorbs some of the insecticide and expresses some of its pest-deterring effects as it’s growing. Neonic seed coatings are often preferred to spraying and the use of other insecticides because they’re effective at low concentrations and less toxic to mammals.

The debate erupted in May of  2017, when Christian Krupke, an entomologist at Purdue University, and colleagues published a study comparing cornfields planted with untreated seeds to fields with neonic-coated seeds at three locations in Indiana over three growing seasons. They found no evidence of yield benefits from the seed treatments. Although the study was one of the first to show ineffectiveness in corn, contradicting previous research, the paper’s authors write that their study, along with studies on other crops, “suggest that the current use levels of insecticidal seed treatments in North American row crops are likely to far exceed the demonstrable need.”

Critics of the study, many tied to the agricultural industry, point to a 2014 report by AgInfomatics, an agricultural consulting firm, which reviewed over 1,500 field studies and found yield benefits for all crops studied, ranging from 3.6 percent for soybeans to 71.3 percent for potatoes (corn clocked in around 17 percent). They also surveyed farmers and found other financial benefits, such as not needing to spend the time and money that goes into scouting fields and spraying insecticides. 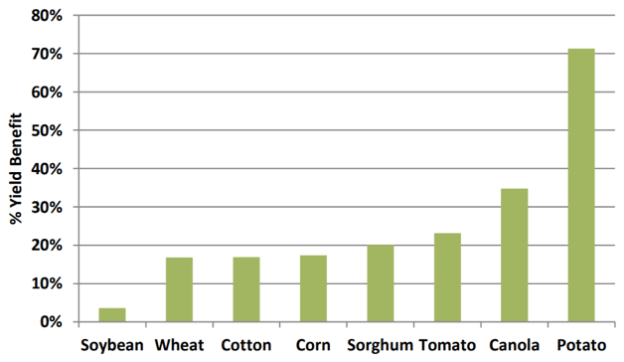 “The simple answer is farmers would not continue to buy them if they did not produce value,” explained Peter Nowak, a University of Wisconsin environmental studies professor associated with AgInformatics. Nowak sees insecticidal seed treatments as part of an emerging technological trend in agriculture where the seed, and treatments, is the future of row crop production.

But John Tooker, a Penn State University entomologist who studies neonicotinoids, thinks the AgInformatics study should be taken with a grain of salt because it was funded by pesticide manufacturers and was not published in a peer-reviewed journal.

“Time and time again, research in various sectors (biomedical, nutritional science, agricultural science, etc.) has shown that reports funded by the industry tend to support the industry perspective,” he told The Progressive Farmer. “This report certainly does that, and it is good to recognize that potential lack of impartiality.”

In response, Nowak said he’s tired of the “cheap shots” taken at the AgInformatics report.

“Show me something more robust and valid — there is none,” he said. “We have not (over) generalized from a single study as has been the case with the critics. Instead, we pointed out important nuances associated with neonicotinoid efficacy found across hundreds of studies.”

Researchers agree that neonicotinoid effectiveness depends on the crop and where it’s grown. For example, recent research has shown that neonic seed treatments have yield benefits for soybeans in the South, but convincing evidence to support their widespread use in northern states, where most US soybeans are grown, is harder to come by. This is likely because the warmer southern climate is more hospitable to early-season soil pests.

Krupke and Tooker are part of a group of entomologists in the Midwest that argues soybean seed treatments are largely unnecessary in their region. They say the plants are able to withstand early season pest pressure without inflicting economic losses. By the time more serious pests come along, such as the soybean aphid, the insecticidal effects of seed treatments have already worn off. Instead, they recommend an integrated approach that includes “rotating crops, conserving natural enemies, using soybean varieties with resistance to pests (soybean aphid) or disease (bean pod mottle virus), and scouting and applying insecticides at established thresholds.”

However, there are certain high-risk situations, such as food-grade soybeans or fields transitioning from pasture to soybeans, in which entomologists agree that treatments can be useful. 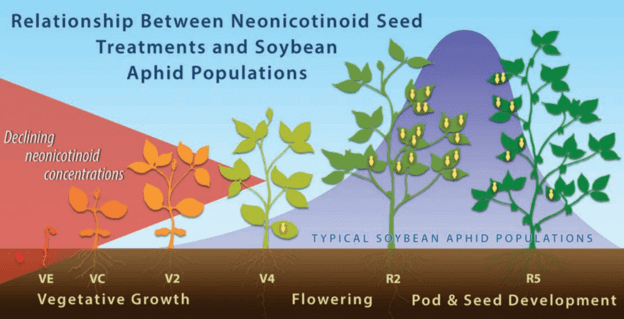 From a joint publication by 12 Midwest universities: There is little or no insecticide remaining in soybean plants by the time soybean aphid populations typically begin to increase.

A 2014 review by the EPA agreed, concluding that the seed treatments “provide negligible overall benefits to soybean production in most situations.” But USDA chief economist Robert Johansson wrote a stern letter to the EPA in response, stating that the USDA disagreed with the assessment, and criticizing the agency for adding “an additional and unnecessary burden” on farmers.

The debate over neonicotinoid effectiveness highlights some of the unique challenges farmers face, and the difficult decision-making process inherent in the low profit margin, high-stakes world of modern agriculture.

“I once lost several thousand dollars worth of corn when an unexpected soil insect pest destroyed much of the center of a field,” he said. “That’s the time when I decided to purchase all neonic-treated seed in the future.”

“The unpredictable nature of soil insects is why growers have adopted treated seeds so widely,” she said. “Many of the pests that they protect against are found in the soil and cannot be treated with a spray because by the time a farmer identifies the pest problem, the crop is lost.”

Van Larson, an independent agronomist at Agronomy Services Plus in southern Minnesota, is skeptical of the entomologists’ research showing neonics don’t increase soybean yields, partly due to past experiences. In 2001, university researchers told him not to spray soybeans because it could harm beneficial insects. Then the aphids came.

“It was massive amounts of money that we lost listening to that suggestion,” he said.

Krupke, the Purdue entomologist, argues that many farmers aren’t aware that they’re buying neonic-treated seeds and are paying extra for it.

“Even if they do, they often have no other choice,” he said. “The market provides no easy option to buy untreated seed, especially in corn, so there is no basis to price compare.”

Farmers, however, don’t seem to be clamoring for untreated seeds at the moment.

“The reality is that farmers want this product,” Kevin Cavanaugh, director of research for Beck’s Hybrids, a seed company, told the Indiana Prairie Farmer. “I’ve yet to have the first farmer tell me that he doesn’t want neonic seed treatment on his seed.”

A version of this article previously appeared on the GLP on October 3, 2017.

Paul McDivitt is a science and environmental writer based in St. Paul, Minnesota. He has a Master’s in environmental journalism from the University of Colorado. Follow him on Twitter @PaulMcDivitt

The GLP featured this article to reflect the diversity of news, opinion and analysis. The viewpoint is the author’s own. The GLP’s goal is to stimulate constructive discourse on challenging science issues.