What Is It And How Can I Enroll?

The Apiculture Pilot Insurance Program (API) is insurance offered through the United States Department of Agriculture (USDA) Risk Management Agency (RMA) meant to insure beekeepers against lower than average rainfall which could negatively affect honey production. API was at first piloted in a few states, and expanded to include all 48 contiguous states in July of 2017. API participation rates throughout the country are relatively low, and many beekeepers I’ve talked to are unaware of the program or are skeptical of it. This article provides an overview of the API program and references if you want to learn more about it.

API is a type of index insurance, meaning policies are not based on actual production or loss, rather payments are triggered by low precipitation relative to a chosen coverage level.  Payments and coverage are based on a grid system, where grids cover an area of 0.25 degrees latitude by 0.25 degrees longitude (roughly 17 miles x 17 miles at the equator).  An API policy is based on the specific grid (or grids) in which colonies are located. Rainfall index values are calculated by a weighted average of nearby National Oceanic and Atmospheric Administration (NOAA) weather stations, and are reported in relation to historical average rainfall in that grid.

So, what do current participation rates look like in the API program? Table 1 details the regional participation in API in 2018, where the honey producing regions are defined in Figure 1. In 2018, 811,249 colonies in the U.S. are insured with this program. Using the number of colonies in the U.S. on July 1, 2016, this amounts to just over 25% of total U.S. colonies insured. The western region of the U.S. has by far the most colonies enrolled in API, with a majority of those colonies (72%) being insured in California. 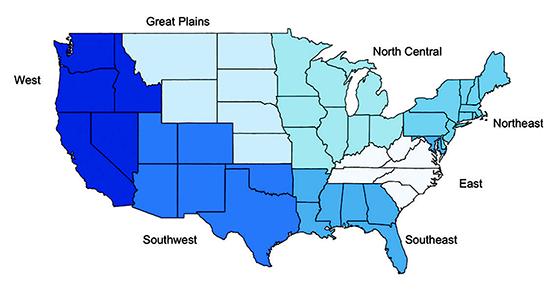 Before getting into the components of an API policy, I think it’s helpful to outline some common insurance jargon.

Indemnity: The amount of money you collect when the rainfall index falls below your chosen coverage level.

Premium: The amount of money you must pay for your API insurance policy.

Subsidy: The portion of your premium that the Federal Crop Insurance Corporation will pay.

To participate in API, producers must make a number of decisions.

Table 2 shows an example of a 2018 API policy option for a South Dakota honey producer who believes the months of June and July are most influential for honey production. In the example, the beekeeper would receive an indemnity if the rainfall index in either May-June or July-August falls below the coverage level of 80%. The county base value for this policy is $133.31. The producer believes this value is too low so he chooses a productivity factor of 130% to increase his insured dollar value.

In addition to varying based on coverage level and insured value, API insurance premiums vary depending on the month intervals chosen and geographical location. Figures 2 and 3 display 2018 average premiums per colony by the two-month interval chosen in each region (East and Northeast regions were omitted due to the low number of policies purchased in those regions). The Great Plains, North Central and Southeast regions have similar seasonal trends in rainfall, so in these areas, premiums are significantly higher in the winter than during the spring and summer.  The West and Southwest regions differ significantly from the other regions in rainfall patterns, so premiums look much more sporadic throughout the year. In fact, the West region sees premium patterns nearly opposite of those found in figure 2, with high premiums during the summer and low premiums during the winter months. 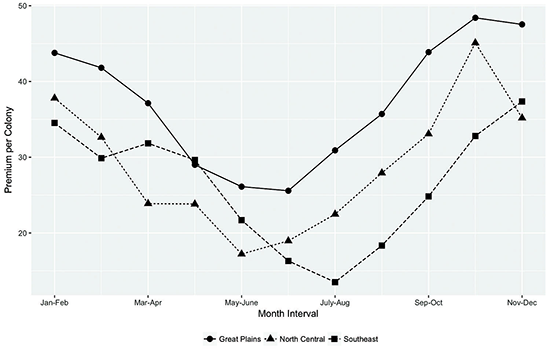 Figure 4 depicts average per-colony premiums, subsidies, and indemnities for each region in 2017. On average in 2017, participating beekeepers in all regions received more in indemnity than they paid out in premiums (after accounting for the subsidy). This payout from low precipitation is meant to offset decreases in revenue and increases in costs due to low honey production. In a high rainfall year, average indemnities may be less than premiums paid in by beekeepers. It is presumed that higher than average rainfall will result in higher than average honey production, so beekeeping revenues would be higher and/or costs of feeding lower. 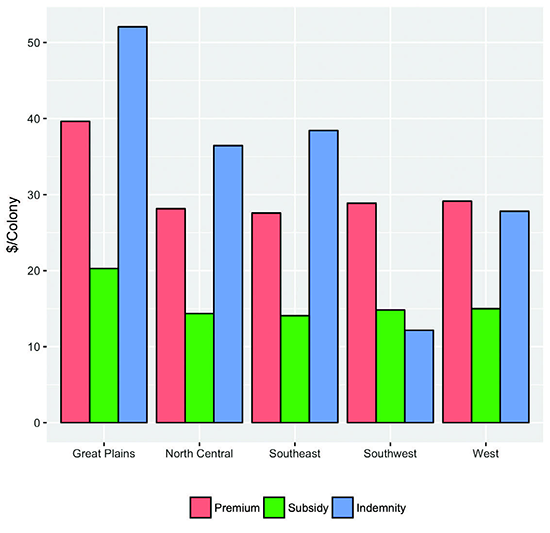 USDA RMA provides a useful online decision tool (see reference below) that producers can access to find their grid, explore policy options and costs, and plot out historical rainfall indices and policy outcomes. API insurance can be purchased by any authorized crop insurance agent (see link below for agent locator). The enrollment deadline for 2019 API is November 15, 2018, and the premium payment deadline is September 1, 2019.

API has potential to be a useful risk management tool for beekeepers, especially at the current subsidy rates.  API is not set up to insure against all factors influencing honey production, so it should not be used as the only tool for managing risk. I encourage you to look into this product for your operation. See the following resources for more information.