Pseudoscorpions May Be The Answer.

Due to the use of pesticides in agriculture, but also due to Varroa mites, the pressure on bee colonies has steadily increased in the last decades. The application of organic acids against Varroa mites increases the pressure on the bees. The project tried to use chelifer cancroides as Varroa control agents and collected data on the number of fallen Varroa mites during eight months in 2017. It compared colonies in wooden hives equipped with chelifers with control colonies in wooden hives and in Styrofoam hives in 13 test stands around the city of Hanover, Germany. The number of fallen Varroa mites in the wooden hives with chelifers was found to be significantly lower than in the wooden hives without chelifers. 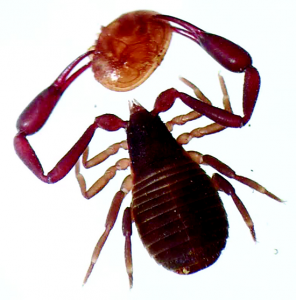 The approach taken by Torben Schiffer in Hamburg to control the Varroa mites by symbiotic coexistence of chelifers (Chelifer cancroides, Arthropoda, Arachnida, Pseudoscorpionida) and bees seemed promising to us. Meikle mentions the possible use of pseudoscorpion to reduce the number of Varroa mites, but points out that there is still no field research available. Donovan and Paul point out that chelifers historically used to live in hives. Only by the introduction of hives made of sawn and therefore smooth wood or later Styrofoam hives, any space in the beehive in which chelifers could have retreated or nest disappeared. As long as bees were kept in straw baskets or hives made of coarse wood, this was still possible. The type of hives that are used is therefore crucial for the ability to work with chelifers.

However, it is also important to offer suitable places for the chelifers to retreat and build nests. Chelifers prefer dry environments. Schiffer therefore recommends hives made from wood instead of Styrofoam because relative humidity in Styrofoam hives has been found to be very high. He has converted frames into shelters for chelifers. These frames are filled with rough wood, behind which the chelifers live.

Van Toor, who has also been researching the symbiosis of chelifers and bees is also using frames filled with wood as dwellings for the chelifers. Initial experiments with New Zealand pseudoscorpions (Nesochernes gracilis) showed that although these pseudoscorpions ate Varroa mites under laboratory conditions and could be successfully bred, they were quickly extracted from the hives by the bees. Even in new trials with Chelifer cancroides, van Toor has not yet been able to significantly reduce the number of Varroa. However, his findings indicate that a more precise understanding of the hunting behavior and feed preferences of the chelifers might be important, and the choice of the right prey, as well as the correct design of the housing of the chelifers, seem to be critical for the success of the symbiosis to control Varroa.

In the context of temperature and humidity in the hive Tautz and Heidinger point to the large moisture-regulating effect of deadwood, which bees would naturally find in their habitat. Also the results of Schiffer (2013b) suggest clear advantages of wooden hives.

The objective of the project was to measure the impact of chelifers on the development of Varroa mite populations in bee colonies.  To achieve statistical power it was decided to place three hives on each of 13 locations in the Region of Hanover. One of these hives would be made of wood and equipped with 150 chelifers, one other would also be of wood and the third one would be a standard Styrofoam hive.

In order to measure the intensity of Varroa infestation of the bee colonies, the number of mites dropped from each hive on drawers below the hive was recorded weekly. The number of mites falling in this way is related to the actual infestation of the respective hive and was repeatedly used as an indicator of the Varroa infestation (Spivak 1996, Ostiguy and Sammataro 2000, Guzman-Novoa et al. 2012).The number of Varroa mites falling out of each hive was measured from week 34 in 2016 up to and including week three in 2018.

To equip 13 hives with 150 pseudoscorpions each it was necessary to get hold of about 2.000 chelifers. Since chelifers are not a marketable product, they were collected on farms in the region. The most promising places for the collection of chelifers were found on farms with animal husbandry, e. g. below hay and straw stocks above stables. Particular success was achieved in a sheep pen. Hay or straw was cleared out of the attics. Especially under boards lying around there, the chelifers were found in very similar situations to those described by Schiffer (2013 a) in the description of his catching method.

The chelifers were transported in jars or small buckets with lids. The collected chelifers were kept in four terrariums in an attic until they were brought into the bee colonies. Together with the animals themselves, substrate (hay, straw, brittle wood) was brought along and filled into the terrariums. From the organisms contained in this substrate, the chelifers have also continued to feed. In addition, potential feed (e. g. silverfish, dust lice and mites) were swept off boards with a feather and put into the terrariums. Potential predators (e. g. larger arachnids, centipedes, mealworms and meal beetles) were sorted out as far as possible.

A disadvantage in keeping chelifers “on stock” in terrariums can be cannibalistic behavior, especially when there is a lack of food. De Andrade and Gnaspini (2002, p. 615) described the extent of cannibalism among chelifers in captivity as small; they indicated a cannibalism rate of 1%. Within the scope of the project, however, up to 2,000 chelifers were kept in four 40 x 100 cm terrariums, which were thickly filled with substrate. According to the project team member’s impression, and without accurate counts and balance sheets, the number of chelifers ultimately recaptured from the terrariums was noticeably smaller than the number of chelifers inserted into the terrariums.

Following the initiative of two schoolgirls, who wanted to work on breeding of chelifers, we accommodated 10 animals each in a terrarium of approx. 30 x 60 cm in the school in September 2016. In the Spring of 2017 nests and nymphs were first observed in the terrarium. In March 2018, a census was carried out, which resulted in a stock of 24 chelifers. With the considerably lower stocking density compared to terrariums with up to 500 chelifers, it is clear that the propagation rate did exceed the rate of cannibalism in the long term.

Our goal in designing hives for the project was to create a breeding area that is as suitable as possible for the common life of bees and chelifers, but to leave space for frames and bees as far as possible unchanged. The aim was to ensure that, in the event of success of the project, beekeepers wishing to work with chelifers would only have to procure or change part of their material. This would reduce the costs of the switchover and thus reduce the barriers to the application of the idea.

For the reason of more favorable humidity (Mathes & Wiegand 2017) wooden hives have been chosen to house the chelifers. In addition, results of Schiffer (2013a) indicate that the electrostatic charge of Styrofoam restricts the orientation sense of chelifers and thus Styrofoam hives do not represent a good habitat for them.

In addition to the space for the honeycombs of the bees, retreat and incubation areas for the chelifers had to be created. Since chelifers live hidden under wood or straw, it seemed expedient to create areas within the hives and to fill them with a “nesting mixture” of straw and brittle, but dry and not too rotten wood, partly also with tree bark. Frames were additionally placed close to the sides of the hive body, which were tensioned with wire mesh (6×6 mm) and filled with the nesting mixture.

The hive body was converted in such a way that the front and rear sides of the body were partially sawn out. Afterwards, a new wall was placed further outwards and any gaps were closed with strips. The cavity, which is now accessible from the inside, was filled with the nesting mixture described above and closed from the inside by wire mesh to prevent the nesting material from being discharged by the bees. Additionally, alterations were made to make the hives watertight and to improve the insulation. Since the hives for the chelifers were specially prepared the treatment of hives with chelifers was not randomized but was restricted to the prepared hives.

The 13 test stations were located in and around the city of Hanover in different ecosystems: gardens (3), city park (2), meadow (1), flowering strips (2), fallow land (2), forest (2) as well as in the city of Hanover at the location of the school (1). In each test stand, all three types of hives were placed side by side.

The mites and other material in the drawer was collected weekly by a research assistant, put in a sample jar, labeled with the respective number of location and hive number and counted by the research class at school. The counting was always supervised by the teacher Hans-Jürgen Ratsch, who helped the students with insecure cases and checked the plausibility of the results. The class was specifically trained by Prof. Bernd Huchzermeyer. During the counting process, several special features such as dead bees or dead chelifers were detected.

In the course of the second half of 2016, numerous changes were made to the test stands. In spring 2017 bee colonies who died in the Winter were replaced and chelifers were collected and put into the hives. From week 22 in 2017 onwards valuable data was continuously available.

Finally, the number of fallen Varroa mites could be successfully determined for nine remaining stands with two wooden and one polystyrene hive each for weeks 22 to 52. From week 33 to week 52 the colonies at the location M (Negenborner Wald) were added. Six data points were excluded after a treatment of two colonies with formic acid.

The following figure 1 shows the average values and standard deviation of the fallen Varroa mites by type of hive counted in the calendar weeks 22 to 52 per bee colony. Figure 2 shows the enlarged section of the time from the beginning of August (week 32) to mid-October (week 41).

Figure 1. Average values and standard deviation of the fallen Varroa mites by type of hive counted in the calendar weeks 22 to 52. 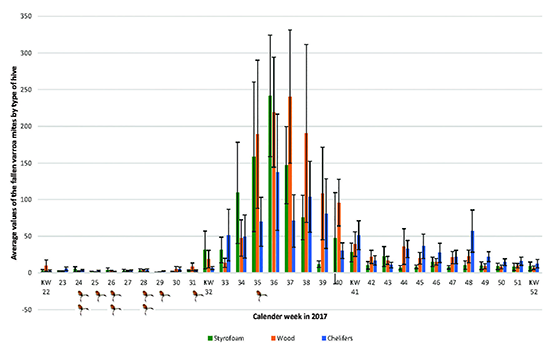 Source: own representation, the chelifers mark the weeks in which they were introduced into the colonies.

Figure 2. Average values and standard deviation of the fallen Varroa mites by type of hive counted in the calendar weeks 32 to 41. 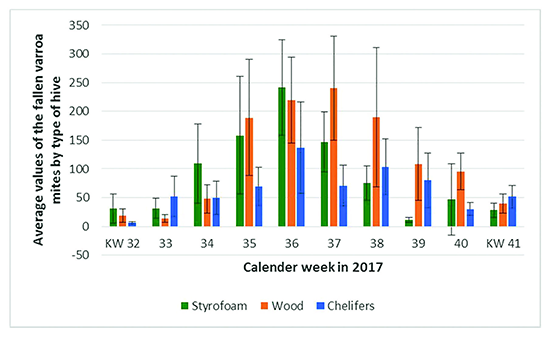 The data collected appear plausible in the light of other sources. Oliver (2018), for example, publishes values of mite fall per colony in 24 hours and during a full year. The data refers to a temperate climate of medium latitude.  The highest numbers of mite fall in September, offset the highest numbers of bee brood and bees in early Summer. All our mite counts remain in the range of mite counts as documented by Oliver (2018).

Based on the basically plausible results, it can be concluded that the statistically significant result, that the Varroa infestation in the hives with chelifers is lower, is neither a coincidence nor a measurement error. This holds true at least for a comparison with the wooden hive. Rather, with the necessary statistical power, it has been proven that the intensity of the Varroa infection can be effectively reduced by introducing chelifers into appropriately prepared wooden hives.

Donovan, B.J. & Paul, F. (2005). Chelifers: the forgotten beneficials inside beehives and their potential for management for control of varroa and other arthropod pests. Bee World 86, 83–87.

van Toor, R. (2016a): Can chelifers be made to control Varroa mites in beehives? Poster on the Apiculture Conference of  New Zealand June 19.-21.