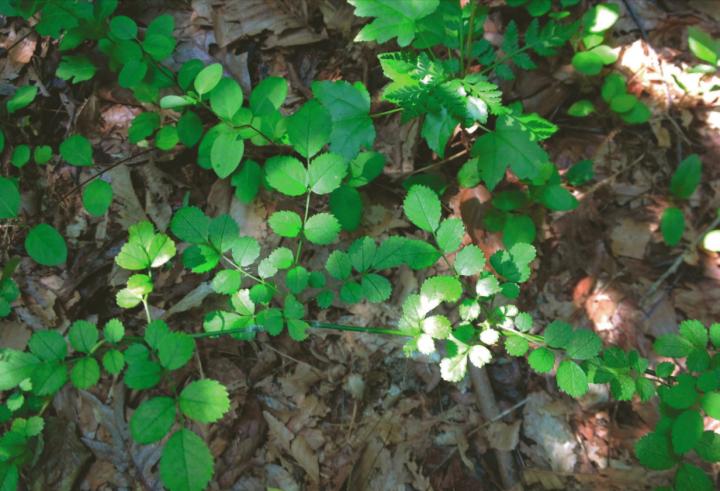 IMAGE: A Rosa multiflora (multiflora rose) recruit, along with Lonicera japonica (Japanese honeysuckle), in a treefall gap in the SERC upland forest, near Edgewater, MD in 2014.

A new research study published in the journal Invasive Plant Science and Management tackles an important, unresolved question in the biology of invasive plants. Which is most important to the establishment of new invasive communities – proximity to seed sources, canopy disturbance, or soil disturbance?

A research team from Miami University decided to compare those three factors in a mature Maryland forest where the invasive species wine raspberry, Japanese barberry, multiflora rose and Japanese stiltgrass are found.

Twice over a three-year interval, scientists conducted a complete census of invasive plants growing in a nine-hectare plot. Any invasives they found were mapped relative to the forest canopy, soil disturbances and an index of ‘seed rain’ that was based on proximity to reproducing plants and the distances seeds disperse.

The team found that seed rain was a significant predictor of where new plants of wine raspberry, Japanese barberry and Japanese stiltgrass established. Not enough seed sources were found to assess the impact of seed rain on multiflora rose.

Gaps in the forest canopy were found to contribute to the establishment of multiflora rose and Japanese stiltgrass. Canopy gaps also promoted fruit production by Japanese barberry and wine raspberry – interacting with seed rain to increase the number of plants establishing in and near these areas.

Soil disturbances predicted the establishment of Japanese barberry, but not the other three invasive plants.

“These findings are especially useful for land managers with limited resources,” says David Gorchov, Ph.D., a professor at Miami University. “If the invasive plants you are battling have seed production or seedling growth strongly associated with new canopy gaps, you can target your control efforts in those areas with a high likelihood of success.”