“Brilliant. Just brilliant.” Oregon State University microbiologist Maude David was speaking about a honey bee gut bacterium engineered to defend against Varroa and a virus. It was the cover story (January 31) in Science, the oldest and largest peer-reviewed American academic journal, not prone to hyperbole. The editors had to have thought there is evidence for a real breakthrough. Here, their title is repeated more from hope.

We beekeepers are inured to reports of the latest cure for the pests and pathogens that ail our bees. Mostly, those silver bullets have turned out to be lead. We heard the claims and bought into a lot of them, but the remedies we have are either ineffective, short-term, expensive, cause for escalating resistance, damaging – or all of that. Even our wax is saturated with chemicals. So, sure, we’re ready to pay attention to a solution with the potential for being effective, cheap and easy to apply. 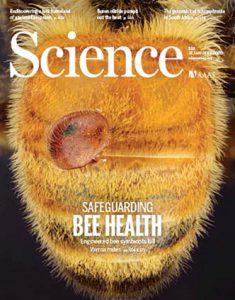 The cover of the January 31, 2020 Science Magazine, the world’s oldest and largest magazine with peer-reviewed papers, announcing what it calls “A microbiome silver bullet for honey bees” – RNAi research.

Nancy Moran, a professor and researcher at the University of Texas at Austin is a foremost expert on the microbiome of insects, an elected member of the National Academy of Science and a MacArthur Fellow. Moran pioneered the field, documenting the evolution of relationships between bacteria and white flies, spittlebugs, cicadas, leafhoppers, and psyllids. She has done extensive research on honey bees and logged, for the first time, the core bacteria of the bee gut. Following a quarter century of related papers, she has published a study concluding that the agrichemical glyphosate perturbs the gut microbiota of honey bees.

Colleagues have been curious to see what Moran learns next from the insect biome. “She’s not just a one-hit wonder,” said German researcher Ute Hentschel. “She has an amazing capacity to focus things so that [new insights] precipitate out.”

Moran was looking for a microbiological key to activate honey bee immunity and limit pathogens. She and her lab team, headed by Sean Leonard, have come up with a genetically modified honey bee gut bacterium tailored to induce host RNAi-based defense.

What does that mean? They have induced bees’ natural biological factories to create protection against Varroa mites and deformed wing virus.

How does that work? To begin with, DNA is a structure that encodes biological information in all living organisms – the recipe book to create an animal, plant, bacteria or virus. RNA is mostly a messenger carrying instructions from DNA for building proteins. Like humans, honey bees have an antiviral defense mechanism called RNA interference (RNAi) that plays a natural role in regulating that process: Small pieces of RNA bind to the messenger RNAs and interfere – possibly an ancient antiviral mechanism that effectively leaves the message lost in translation.
RNAi helps fight off certain viruses, called RNA viruses. After an RNA virus is introduced, it creates molecules called double-stranded RNA (dsRNA) that a healthy cell detects as foreign. “You usually only get signs of these molecules when an RNA virus is replicating,” Moran said. “It’s a signal that this might be an evil thing and you should attack it.” The triggered RNAi immune response causes the degradation of any like-sequenced RNA that’s present. 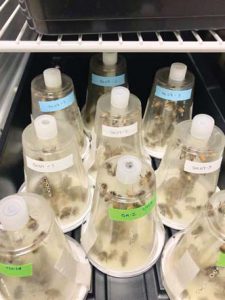 Bees in the Moran lab during testing for the RNAi project. Photo courtesy Moran Lab. 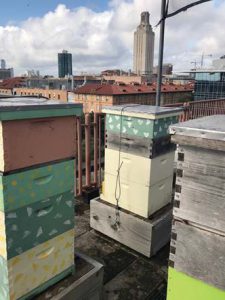 Rooftop hives at the University of Texas Austin used for the Moran Lab study of RNAi. Photo courtesy Moran Lab.

This antiviral immune process can be used to set RNAi to work by feeding or injecting dsRNA. But so far, as a tool, that’s been elusive. When administered to bees, dsRNA has been seen to suppress varroa and Nosema, but it is expensive, unstable, and difficult to work with, although it had no negative effect on bee survival.

Here’s what the Moran lab has done: Leonard and the team engineered one of the core honey bee symbiotic gut bacterium, Snodgrassella alvi, to induce RNAi immune responses. To address each problem, the team engineered one strain of bacteria to target the virus and another for the mites. The engineered S. alvi was sprayed on the bees in a sugar syrup for them to groom off. The bacteria they ingested stably recolonized in the bees and produced double-stranded RNA to activate RNAi.

Results: Varroa mites feeding on bees treated with the mite-targeting strain of bacteria were about 70% more likely to die by day 10 than mites feeding on control bees. Bees treated with the strain of bacteria targeting the virus were 36.5% more likely to survive to day 10. The engineered S. alvi killed varroa mites by triggering the mite RNAi response. The bees with the GM (Genetically Modified) bacteria also successfully challenged Deformed Wing Virus. Leonard’s paper also reports that 11 days after colonization, the engineered S. alvi was found along the bee gut wall with the same localization as the wild type strain. So the GM gut bacteria persistently produce dsRNA and the bee host responds by activating immune pathway genes.

“It lasted!” said David, the OSU microbiologist, who, as an outside observer, found that remarkable, noting that the engineered S. alvi cells remained functional for well over a week. The reason that is unusual, according to Leonard, is that dsRNA previously administered to individual bees resulted in patchy and transient gene knockdown, and it degrades rapidly in the environment.
It appears that bee-symbiont-mediated RNAi has the potential for protecting honey bees from pests and pathogens in a targeted manner. 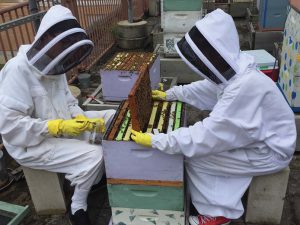 Where are we now? However promising, this work was done with bees housed in a lab. So the next step is to do a field study, which is in the planning stages. But the question with any genetically modified organism is whether it will spread into the environment. It was observed that engineered S. alvi strains were transferred between cohoused bees. What about spreading a FrankenSnodgrassella further? Although the experiments were carried out under the strict biocontainment protocols used with genetic engineering, Moran said that even without those cautions, the risk of the engineered bacteria escaping into the wild and infecting other insects is not a risk. “It lives only in bees,” she said. Such symbionts have evolved over millennia, trading off genes to function in narrow, mutualistic relationships so specialized that they can’t survive outside of the bee gut. The bacterium “doesn’t go outside of bees and doesn’t recombine. I’m confident that it won’t move into another host.”

Moran said, “Most biologists and environmental scientists are not afraid of GMO genes. The main thing that people underestimate is the damage done by agrochemicals. People accept the chemicals but not GM.” Still, the paper says, further research will be needed to determine the effectiveness and safety of the treatments in agricultural settings.

The use of RNAi against honey bee pests and pathogens has been explored before. Beeologics was a firm that was working toward developing RNAi to protect honey bees from Israeli Acute Paralysis Virus. Leonard Foster, a University of British Columbia biochemistry professor who worked on the project, said that the company had developed a process to scale up and reduce the cost of synthesizing double stranded RNA, which they considered to be the commercial product in RNAi technology. After Monsanto acquired Beeologics, Jerry Hayes, editor of this magazine, spent eight years there in pursuit of a game-changing chemical-free product. “I left because we couldn’t deliver it in a field setting consistently. Monsanto spent about $14 million, and we couldn’t get it done.” There is no indication that the project will be pursued, now that the company has been bought by Bayer. 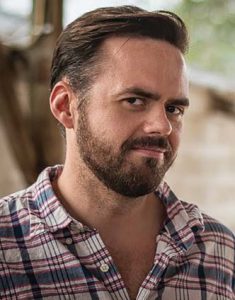 Sean Leonard is the lead researcher in the Moran Lab for the RNAi project, which took several years to develop. Photo courtesy Sean Leonard

The Moran lab may have come up with a microbiological key – mediating RNAi with a bee gut symbiont. Their goal is to improve honey bee resilience, but at the very least they have provided a new tool to study bee biology, enabling new insight into the bee genome that could inform breeding choices.

M.E.A. is a journalist, Master Beekeeper and organic farmer. She can be reached at Mea@MeaMcNeil.com.