This ancient group of plants dates to the Jurassic Age. Around 15 to 20 species are native to the New World, Europe, and Asia. Six of these occur in America. This article emphasizes the native species.

Serving as an important food source in ancient times, walnuts have long been enjoyed by humans and other animals.

All walnut species are sources of nectar and pollen in addition to honeydew. The honeydew yields a fair quality honey that is often used for baking.

Usually slow growing and long lived, walnuts are broad headed species with a somewhat open crown and a straight trunk. They’re mostly deciduous trees although a few can be shrubs or at least shrubby. Due to their tap roots, they often withstand some drought.

Members of the walnut family, the plants are generally medium-sized to fairly large. Depending on the species, they can reach 20 to 65 feet or more in height.

Arranged in a feather pattern, walnut leaves release an aroma when crushed. The large, alternate, compound foliage consists of odd-pinnate leaflets, up to five inches in length. They’re usually greenish-yellow.

While most walnuts are partly self fertile, they produce better nut crops if at least two trees of the same species are planted. Ripening in late Summer into Fall, the large drupes vary slightly in shape and size, according to the species or variety. When mature, the thick husks generally don’t split with the exception being the Persian walnut.

Walnuts are cultivated as ornamentals and for timber and nuts. A good choice for beekeepers provided ample growing space is available.

The slow growing English or Persian walnut (Juglans regia) is the most commonly grown introduced type. Hardy to -25°F, the tree abhors hot climates. Fifty feet tall and 30 feet across, it thrives on well drained hillsides. Carpathian is the hardiest variety – to zone four.

The Japanese walnut (Juglans ailanthifolia), hardy to zone five, is forty feet tall and wide. Heartnut, a disease resistant variety of the Japanese, is only 20 to 35 feet in height. It is hardy to zone four.

Other popular cultivated ones include butternut and black walnut. Walnuts do best in a reasonably rich, moist soil, especially a deep, rich alluvial one. Well drained loams and light sandy soils are suitable. The preferred pH range is 5.5 to 7.0.

The hardiness can vary slightly by species or cultivar. Numerous types of walnut trees are readily available from fruit plant catalogs, such as Fedco, Stark Brothers, and Oikos.

Some walnut trees cause walnut wilt, especially black walnut and butternut. A chemical produced by the roots, nuts, and leaves can adversely affect nearby plants.

Vulnerable species include certain ornamentals and some crops, particularly tomatoes, apple trees, and brambles. To prevent walnut wilt, plant walnuts a safe distance – at least 60 feet away – from the vulnerable ones and remove the nuts and walnut leaves that drop from the tree.

When transplanting, use young plants for best results. Walnut trees are generally propagated by grafting or budding. Seeds require a long time to germinate and produce plants that can be quite variable. Typically, seedlings are mostly used as rootstocks.

Spacing depends upon the species or cultivar, but generally they’re spaced at least 40 feet apart. Butternuts require only 30 to 40 feet, while black walnuts need 80 feet or more.

Place mulch around the plants without allowing it to touch the trunks. Until the plants are well established, water as needed. Although mature walnut trees can withstand prolonged dry spells, they will bloom and fruit better when adequate water is available throughout the growing season.

Young walnut trees should be pruned so they develop a strong central leader and a good branching system.  Pruning is rarely needed on established trees other than to remove diseased, dead, or damaged limbs or to correct the plant’s shape. This should be done during the Fall for the trees bleed heavily from late Winter into Spring.

There is pretty much a native walnut for most every region of the country.

The following are recommended for bees.

Certain things distinguish this species from the other western walnuts. Its leaves turn yellow in the Fall, while its nuts are double the size of black walnuts. Finally, the species grows mostly at higher elevations – to 7600 feet.

Arizona walnut is suited to zones nine through 11. The fast growing plant is especially long lived – up to 400 years. A small to medium sized tree with an open, broad crown and straight trunk, it is mostly 30 to 50 feet in height with a trunk that is over four feet in diameter.

The young branches are hairy. The nine to 13 leaflets (rarely 19) are oblong to lance-like, toothed, and hairy when young. They reach three to four inches in length except for the lower ones on the leaf stalks, which are smaller.

The hairy, yellow male blooms form long catkins, while the females emerge on short, terminal, hairy spikes. The small, round nuts with thick shells are edible.

Preferring deep soils, Arizona walnut can withstand wind and heat. It does best when watered during prolonged, dry periods.

Black walnut is most common in the East and Central regions. Its range extends southward to Florida and westward to North Dakota and Texas. Suited to zones four through nine. The tree grows in floodplains and bottomlands with mixed hardwood species.

The round to oval headed, slow growing plant can require a hundred years to mature. Among the largest nut trees, they’re mostly 50 to 75 feet tall and wide, particularly the cultivated forms. The wild ones can be 100 feet tall with a trunk that is six feet in diameter.

Black walnut bears coarse foliage, two feet in length, with 11 to 23 leaflets that are 1½ inch wide.

Often grown as ornamentals, grafted black walnut trees begin bearing fruits four to seven years after planting. Ripening in early October, the one to 1½ inch wide nuts have a distinctive taste. The shells are hard to crack. 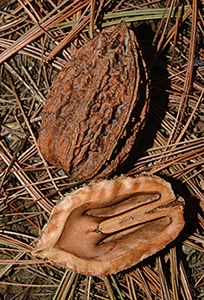 This tree prefers a deep, rich, neutral to slightly alkaline soil. Some varieties are pest resistant.

Also called long walnut or oilnut, this does best in zones four through eight. Native to the East and Midwest, its range extends southward to Georgia, and westward to Minnesota and Arkansas. It grows in the same types of habitats as the black walnut.

Butternuts are shorter lived than most walnuts. With a broad spreading crown, this fast growing tree resembles black walnut but is shorter – only 40 to 60 feet tall and wide. It features fewer leaflets. Both the nuts and the kernels are smaller than those of the other species.

With a rich, pleasing buttery flavor, the elongated to oval nuts feature a hard, thick shell. Well suited to the North, this tree rarely suffers frost damage and is among the hardiest of the walnuts. Butternuts can be tapped for sap just like maples. The plant can be pruned and trained as a bush or tree.

Due to the strong limbs, the plant seldom develops weak crotches. Butternuts will need watering during the growing season if rainfall is insufficient. It adapts to alkaline soils. 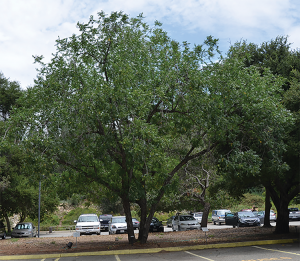 Also known as the northern California walnut and California black walnut, this very lovely native is often grown as a street tree. It occurs along river banks, streams, and rocky or gravelly soils in California.

Preferring a well drained soil, this plant has several features that set it apart from other western walnut species.  Its leaves are bright green while the others are greenish-yellow. In addition, this nut has a smooth shell.

Suitable for zones eight through ten, the narrow headed, small to medium-sized tree with a broad crown has a single straight trunk. Typically, it is 30 to 40 feet in height and nearly as wide although it can sometimes reach 50 to 65 feet when given ideal conditions.

The young branchlets are very hairy, while the leaf stalks are especially downy. Reaching a foot in length, the coarse leaves contain 15 to 19 leaflets, 2½ to five inches long. Often toothed, these are oval to lance-like. They’re hairy underneath along the veins and mid-ribs.

The male blossoms form hairy, yellow-green catkins. The female flowers open in clusters of one to three on short, terminal spikes.

The hairy, globose fruits are 1¼ to two inches wide.  The small nuts are thick shelled.  This is used as a rootstock for grafting English walnuts. 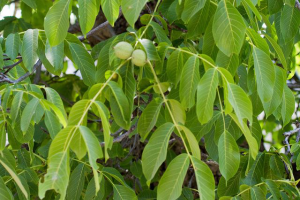 Also known as the Southern California black walnut, this large shrub or small to medium-sized, slender tree is common in California. Suited to zones eight and nine, the fast growing species can live150 years or so.

Compared to Hind’s walnut, the southern California walnut has smaller fruits with smooth, hard shells. Its habitats include canyons, riverbanks, hillsides, and bottomlands. Growing to 4300 feet elevation, this thrives in poor or dry soils.

Typically, this is 12 to 30 feet tall and seven to 15 feet wide, although it has occasionally reached 40 feet in height. Typically, southern California walnut tends to have multiple trunks. It features an open round crown, a short trunk, downy young branchlets, and hairy leaf stalks.

The leaves of Southern California walnut are a foot in length. This typically bears nine to 15 leaflets. One to 2½ inches long, these are blunt and oblong-lanceolate. They’re greenish-yellow and paler beneath.

The yellow-green male blooms form slender catkins in Spring. The small females open terminally on new wood with one to four per short spike. Nearly rounded, these nuts with hard shells have a pleasing flavor. 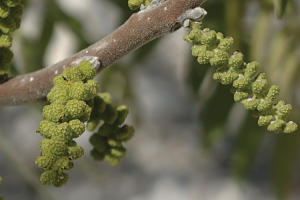 This tree is sometimes called river walnut. Often grown as an ornamental, Texas walnut does well in zones seven through ten. Native from Nebraska southward to Texas and westward to New Mexico and Colorado, the plant is frequently found along creeks, streams, rivers, washes, and dry rocky ravines.

Various identifying features make this plant stand out. It tends to be rather shrubby with multiple trunks. The quite aromatic leaves contain a larger number of leaflets. They’re more slender and delicate looking than those of other walnuts.

This bushy, small to medium sized plant features an open crown. Texas walnut is generally 15 to 20 feet or so in height, but occasionally can reach 30 feet with a spread of six to 15 feet. The young branchlets are hairy.

Around 1¼ foot in length, the leaves consist of 11 to 25, greenish-yellow, narrow, lance-like, toothed leaflets, three inches long. Their undersides are lighter colored and hairy.

The male catkins are two to four inches long. The females form terminal clusters with one to four blooms. The globular fruits, hairy when young, are borne in clusters of two to three. The small, round nuts are only ¾ inch in length.