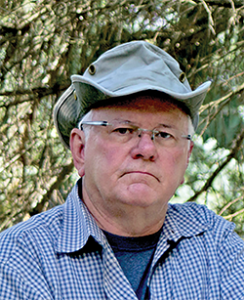 Splitting bee colonies is nothing new. In years past, bee packages were not commonly available to beekeepers. Splitting (frequently called dividing) bee colonies was the best way to make colony number increase – other than chasing swarms.

Then for many years, packages were available at a competitive cost. It was simply cheaper to buy package bees and keep your strong colonies as honey producers.

The present day cost of packages and queens has inspired me to review the process of making split colonies from my existing colonies. Dividing is not an exact process. Other in-depth articles and books have presented details on making colony splits. My intent here is to review some of the fundamentals of making colony splits, but also to include actual bee yard situations and the extraneous things that happen that make beekeeping challenging.

Splits from my own colonies

In this discussion, I will need to say several times that there are no “standard” splits. True, there are types that are more common than others, but in general, the size of a split is very nearly a personal thing.

This past Spring, from 24 established colonies, I arbitrarily chose to make ten splits. I have an abundance of four-frame and six-frame nuc boxes. I chose to make six-frame splits. I spent more time than I care to confess scraping and preparing old comb for reuse in the nuc boxes. This was a concession on my part for I had considered phasing out these old frames – for no other reason than they were old.  Increasingly, as have so many others, I have become concerned that these combs are carriers of some unknown ailment like dysentery or chalk brood or even worse American foulbrood or worse yet – miticide residues from previous mite control programs.  But I have no definitive proof that any of these problems were present and I had the combs in proper numbers readily available. Then, the cost and labor of assembling new frames had to be considered. Hence, when the split day came, I used the old combs.

So much as possible, I put in three empty frames and two frames with residual quantities of honey,  a frame of mixed brood (some of both open and capped brood) and just the right number of adult bees (Probably 1½# or so). Some nucs got more while some got less. But I felt that I had a bit of a security blanket in that the small, confused colony at least had a bit of food for a few days. (As it worked out, they would need it.) I didn’t paint the nuc boxes but they were scraped reasonably clean and were otherwise suitable for short-term use.

Why use nuc boxes at all?

Why use nuc boxes at all? The splits – if all went well – would outgrow the nuc boxes quickly. Why not just put the split directly into a single deep box and forego the preparation and moving the nuc boxes? That poses an excellent question and one for which I am not sure I have ready answer. I have only the thinnest bit of science but a much stronger gut feeling that a small colony is more “balanced” in a smaller hive box. Robbing by stronger colonies is a concern. Additionally, the labor in forming, closing, and loading the nuc boxes is less work (initially) than dealing with the extra equipment of a full hive. Finally, and most importantly, I could have the nuc boxes ready much quicker that I could prepare the single-deep hive. So I used nuc boxes.

I bought my queens from a local supplier, who in turn, got them from a California producer. They cost me $35.00 each. Why tell you this? Because I have mentioned this shock in previous articles. In my beekeeping past, paying $2.50 for a “bug” was bad enough. The penalty is now much greater for making simple mistakes. But hey, I paid a $1.69 for a bottle of water. It’s only money.

Queen management within the split

As is described in the “Tips” list, I prefer to release my queens directly rather than use the slow release method. When all the time invested in this project is considered, the new queen stays with the spilt colony at least seven days. I can get a good idea of the caged queen’s potential reception by the way the bees are treating the cage. Additionally, since I want this splitting process to go as quickly as possible, there is a chance that I unintentionally took the parent colony’s queen. My new queen would be killed if she were released into this environment. If she is not treated kindly, I immediately recage her. 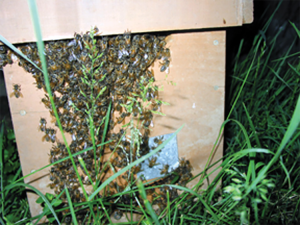 Bees on the front of a freshly filled nuc box.

Additionally, I want to confine the queen as long as it takes for her be accepted in a friendly manner. Some splits take longer to accept new queens than others.  Due to the scarcity and costs of new queens, the common recommendation has become to allow the queen to stay caged longer. I completely agree with this increased time, but with a couple of caveats;  (1)  leaving the queen caged longer – depending on the style of the cage – will result in significantly increased amounts of burr comb around the cage and (2) leaving the caged queen in longer will expose her to the vagaries of internal and external colony temperatures. I worry that my costly queen and her cage will be too far from the bees’ area of activity. I worry that the nights become too cold or too hot. So on one hand – yes – leave her caged longer. It’s safer. On the other hand, get her out as soon as possible. The risk of holding her in an improperly positioned cage is greater than a short introduction period. Neither philosophy is correct every time. In general, I am tending to leave queens in the cage longer and worry more.

Buying splits from the colonies of others

Based on availability, beekeepers can buy colony splits – of multiple sizes and varying prices – from other beekeepers – with or without queens. Everything is negotiable. Buying splits eliminates all the work of getting set up and searching through your strong colonies for proper frames and a compatible number of bees. Right?  Well, not really. I just end up paying someone else to guess on my behalf. And then there are other unexpected challenges.  Witness the following saga of several years ago.

I purchased 12 five-frame splits from another established and competent beekeeper. Due to all the requirements of frame exchange and nuc box return (or me hauling nuc boxes to the beekeeper, but then there is the hassle of transferring the nucs to my boxes with the concurrent escape of bees or I could help with the splits and put them directly in my boxes,  but that would take much more time.  On and on it goes.) Why this contorted discussion? Because I paid more for the nucs choosing not to implement frame-exchange and the beekeeper used paper corrugated board nuc boxes that could be discarded when I transferred the splits at my site.  So I didn’t haul my own nuc boxes to the split-site, opting to use the paper nucs instead.

I drove the 100 miles to the beekeeper’s yard as heavy thunder clouds formed. We loaded the splits as quickly as possible and used tape to stick the paper tops to the paper nuc boxes. I really, really, didn’t want the boxes to get wet. Within speed laws, I quickly drove home without restroom or food stops. Heavy, ominous clouds threatened the entire way; even a few light showers came my way.

Upon my arrival at home an hour before dark, I discovered that four of the 12 tops had blown away. I had scatted some unknown number of bees over the last one-hundred miles. Now, the clouds and wind was significant – even bad. My small beekeeping staff began to rush about, but it was clear that this wind would destroy the paper nucs and blow them all about. What to do? What to do? What to do – now?

Radio word came of tornadoes in the area. While some nucs had no tops, all of the soft boxes were leaking bees and sagging due to the wetness. In frantic desperation, we put our box truck in a stand of pines and transferred the beleaguered nucs from the open pickup truck to the enclosed box truck. Tops were re-supplied to those nucs not having them. I left the roll-up door ajar two feet and opened the splits in the dark truck box just as torrential rain began falling. I went home and worried. I had more than $1000 in that box truck, but more importantly, I was supposed to know what to do, and I really didn’t. I had never set up nucs during tornadic weather. 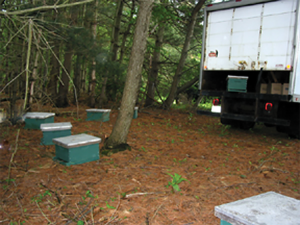 The next day was also rainy.  Two days later, amidst bee confusion, we took the paper nucs from the truck box and installed them in standard equipment.  Drifting and confused bees were everywhere, but at least they were in the general area.  I sat a single nuc in the truck box to pick up stragglers. A day later, I sat that colony on the ground and moved the truck. I am very, very happy to tell you that all the nucs survived and look as good as they could after such an experience.

My point here is that none of this was planned and none of my procedures can be considered traditional split implementation and management. What will I do differently next time?  Nothing but hope for good luck and better weather.

I’m over my word budget with Editor Kim, but next month I want to vent and make some suggestions about evolving modern beekeeping techniques. (In other words, I had a caged queen die on my watch. Grrrr.)