Autumn preparations are frequently deemed the most critical of any season.

Beginning in September and continuing through December, Autumn is when preparations are made for colony overwintering. How well your colonies are prepared in Autumn will determine, to a great extent, how productive they are next Spring. Now is the time to begin planning these management operations.

Let’s Look at The Queen

The colony should be requeened no later than August if the colony does not have a young queen, (less than one-year old), queen going into Winter. By requeening in August, the new queen has enough time to achieve four to five frames of winter worker bees. November and December are typically the lowest brood levels during the year, sometimes even reaching a broodless period. A young queen will also help minimize swarming next spring and helps reduce queen failure during heavy colony build-up in the months of February and March.

Feeding and brood assessment should occur August through September. If the colony does not have enough bees in August, the colony should be fed 1:1 sugar syrup to stimulate brood development.  Internal feeding should be used to prevent robbing, also, use entrance reducers.

Early in September, if the colony does not have at least 50 to 60 pounds of honey (medium feed chamber + honey stored in the brood chamber), the colony must be fed. In South Carolina, the bees begin to store sugar syrup in the colony from mid-September through October. This results in a contiguous storage of honey in the colony without any gaps.

However, when it gets colder, usually after October, they will stop taking the feed. The bees will leave sugar syrup in the feeder and no longer store it in the colony.

As the Winter progresses, the bees move vertically through the equipment stack consuming honey until they reach the inner cover. Hence, if the bees use all their stored honey, they will huddle under a pail feeder placed on top of an inner cover to access sugar syrup (carbohydrates).

Also important besides honey storage is enough pollen in the brood chamber, typically two frames (frames two and nine in a fully filled 10 frame brood chamber) will allow the bees to build-up from December until around the first of February. This is when the Maples bloom in South Carolina, which is usually a good early bloom.

Be aware, in some locations, there are pollen dearths in the autumn, which may impact winter bee development! If either enough honey or pollen is not available in the hive, the colony should be fed honey or sugar syrup or pollen or pollen substitute.  It takes honey and pollen to raise young bees.

Weak colonies are defined as ones that do not have at least four frames of brood, sufficient honey stores, and sufficient pollen stores. The old rule of thumb, which is no longer recommended, was to combine a weak colony with a strong colony, supposedly resulting in a strong colony. The weak queen was killed and the colonies inspected to ensure they were disease free.  Combining two weak colonies was not recommended.

However, this old rule of thumb has been replaced in favor of culling weak colonies in autumn. This change in approach is based on the difficulty in detecting diseases and viral infections, as well as the costs of labor, equipment, and feed to sustain a weak colony over winter. It makes little sense to save a weak colony if it leads to further illness or compromises other viable colonies.

During colder months new equipment should be assembled and older equipment should be repaired. New unpainted woodenware should be primed and painted with two coats of a high-quality paint. Old equipment in need of repair and painting should be swapped out of the field to a location accessible to be worked on in the November, December time frame. It is less expensive to maintain your existing equipment than to purchase, assemble, prime, and paint new equipment. New equipment that is procured and assembled may be determined by your colony growth plan and sales and marketing plan. In South Carolina’s high humidity, I have found equipment assembled with a high-quality water-proof glue and nails and painted with a coat of high quality primer and at least two coats of good quality paint, will last about ten years prior to refurbishment.

A colony growth plan, plus a sales and marketing plan should be developed. These plans identify existing equipment and resources and any new equipment that will be required for replacement or growth. Necessary new bee yards for the upcoming season should be secured based on your colony growth plan, and sales and marketing plan. Financial analysis numbers should be analyzed to determine if you can cover your costs with the number of colonies and their honey production in an outyard. If pollinating, you need to first analyze expenditures to determine pollination rental rates to ensure a reasonable return. Then pollination contracts and fee structures can be offered to interested parties. For more information refer to my book, https://outskirtspress.com/BeekeepingTipsandTechniquesfor theSoutheastUnitedStatesBeekeepingFinance

Varroa mite levels, having been monitored throughout the Summer, should be again checked in August and also in October and November. The reader is referred to Randy Oliver’s site: www.scientificbeekeeping.com/ for more information on what are acceptable levels. In Autumn the queen will reduce her egg laying, resulting in an increased number of Varroa mites becoming phoretic (on the bees and feeding) or dispersal (Varroa on the bees and not feeding) rather than in the brood. This will result in higher mite levels but more accurate mite readings. Treating for Varroa mites should be considered based on the mite levels. 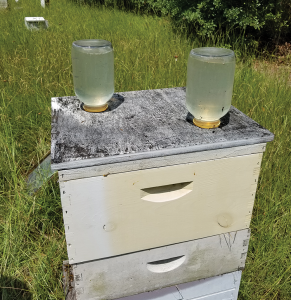 Feeding – often sugar syrup in the south will not freeze in the Winter. (MacFawn photo)

Mite levels can be determined using either the sugar roll or alcohol wash methods. Sticky boards are no longer considered reliable for obtaining accurate mite levels as too many factors come into play when assessing various sized colonies at different times of the year. Usually, November and December are the queen’s lowest laying time and an excellent time to treat. Most treatments only kill phoretic/dispersal mites (except Mite Away Quick Strips – MAQS or Formic Pro) so November and December are an excellent time to treat with Oxalic Acid since Varroa mites are on the bees and not in the brood.

In South Carolina, the colony will need four to five frames of Winter bees to get the colony through the Winter until late March or early April. Treating as necessary in August will ensure healthy nurse bees which will help raise healthy Winter bees. Winter bees will start emerging at the end of August to first part of September. Winter bees have more fat/Vitellogenin in their bodies that enable them to overwinter better. Also, the winter bees are confined and do not forage as much which aids in their longevity.

If you need to feed in the Winter or Spring, feed continuously until the nectar flow starts. I prefer to use pail feeders inverted over the oval porter bees escape hole in the inner cover. If needed, the bees can huddle under the pail feeder. Other feeders may have an issue where the bees cannot access the syrup when they are clustered in cold weather.

In the Fall, if not done previously during the dearth period, reduce your entrances with an entrance reducer to minimize robbing and yellow jacket problems. Yellow jackets will invade weak colonies and kill them. Also, queen excluders need to come off as they can prevent the queen from moving up with the cluster.

Storing frames are also of concern. There are two factors to consider when storing frames of drawn comb. Brood frames will be affected by wax moths. To store brood frames place them in a plastic bag and freeze them for several days.  The wax moths are after the dark brood section of the comb. Clear white super frames are typically left alone by wax moths. Frames with foundation are rarely affected by wax moths. I stack supers with drawn comb at 90 degrees so that light and cold weather gets to the frames. Wax moth larvae are killed when it gets to freezing temperatures, especially if they are outside of the cluster. A final consideration is extra equipment. Any extra equipment should be removed from the hive due to Small Hive Beetles (SHB), especially if it is a weak colony. This is due to the bees not being able to care for the empty space where SHB can hide. As mentioned earlier, if it is a weak colony you should consider culling.

Autumn colony management will determine your success next Spring to a great extent. In much of the southeast, the colonies should be fed to ensure at least 50-60 pounds of honey in the combined brood and feed chambers. Weak colonies should be culled and not combined. Colonies should be assessed for Varroa and treated if necessary. The colonies should go into Winter with a young vigorous queen. A colony growth plan, and sales and marketing plan should be developed to direct your tasks and efforts.

Special thanks to the following for reviewing this article: Sally Adams, Larry Coble, Freddy Proni.